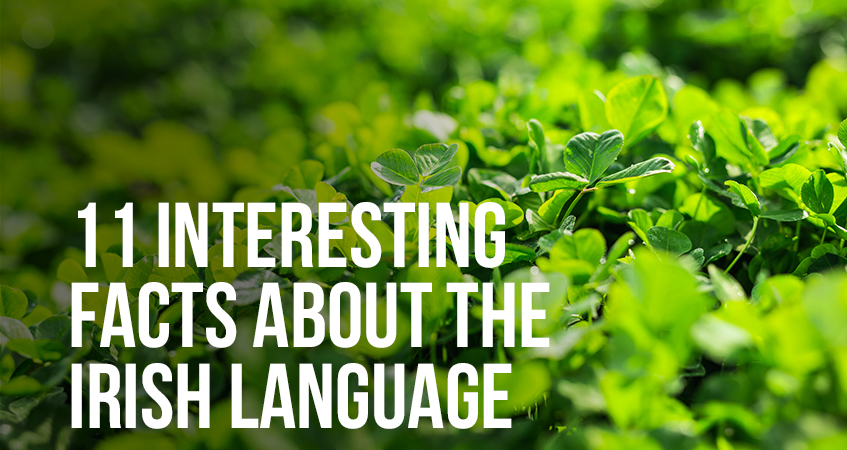 It’s St. Patrick’s Day! In honor of the occasion, let’s get to know the Irish language a little better. Here are 11 facts about Irish that will make you sound smarter when you’re out celebrating with a pint tonight:

Anywhere from 30% to 40% of the population of Ireland can speak Irish.  However, only around 140,000 of them are native speakers. Most learn it as a second language. Only around 82,000 people speak it daily outside of school.

The language has spread outside of Ireland, too.

For example, about 18,000 Americans speak Irish at home.  There are about 9,000 Irish speakers in Great Britain. And there is even a (small) official “Gaeltecht” in Ontario, Canada.

Irish used to be one of the main languages of Newfoundland, Canada.

Starting in the late 1600s, Irish immigrants began arriving in Newfoundland to work in the cod fishery there. Between 1750 and the 1830, the stream of Irish arriving on the island turned into a flood. By 1815 there were more than 19,000 Irish in Newfoundland, and the majority of them spoke Irish.

The language died out in Newfoundland by the 19th century, but it left some traces in the local dialect that still persist today.

The Irish language has even been used in space.

In 2013,  Canadian astronaut Commander Chris Hadfield sent a tweet captioned in Irish from the International Space Station. This marked the first time the Irish language was used in outer space.

Irish has the oldest literary tradition in Western Europe.

According to Wikipedia, “Early Irish literature is the oldest vernacular literature in Western Europe.”  Irish inscriptions in the Ogham alphabet date back to the 4th century AD.

Aside from these inscriptions, the earliest examples of written Irish date back to the 8th century AD. These were glosses, notes and comments written in the margins of religious books.  The oldest collection of Irish literature is the  Lebor na hUidre,  or “Book of the Dun Cow,” which dates back to 1100 AD.

Irish is one of the official languages of the European Union.

It received this status in January 2007. However, there is currently a shortage of Irish interpreters and translators.  According to Politico, Brexit has made the situation “more urgent:”

Some Parliament officials say the recruitment drive has become more urgent in the wake of the Brexit vote. With Ireland likely to suffer more than any other EU country after the U.K. leaves the bloc, they believe it is important to avoid marginalizing the Gaeilgeoir community.

Irish is a Verb-Subject-Object language.

English, on the other hand, is a subject-verb-object language. For example, in English we would say “He hit me.” Irish, that would be  Bhuail sé mé.  Translated into English word-for-word, you’d get “Hit he me.”

This syntax sounds odd to English speakers, and it’s one of the quirks that set the Celtic languages apart from the rest of the Indo-European language family. Only about 8% of the world’s languages use this structure.

Your favorite fantasy books are probably available in Irish.

Plenty of popular English-language literature is available in Irish. For example, an Irish language translation of “The Hobbit” was released in 2011.

At the time, experts predicted that An Hobad would become the best-selling Irish-language book of all time.  But I haven’t been able to verify whether or not that actually came to pass.

All of the Harry Potter books have been translated into Irish, as well. Want something more adult? Game of Thrones is available in Irish as Cluiche na Corónach.

Relatedly, there was no word for “elves” in Irish until Irish translators working on An Hobad invented one.

Irish doesn’t have a word for yes or no.

Instead, to answer a question in Irish you would repeat the verb, either positively or negatively. Benny at Fluent in 3 months gives this example:

We simply repeat the verb of the question, e.g. Ar ith tú do lón? D’ith! Did you eat your lunch? I did! (literally, I ate)

Irish has 3 different types of numbers.

First, there are the disjunctive cardinal numbers. These are the words you use when you’re adding and subtracting, telling time or giving a phone number. Then, there are the “nonhuman conjunctive numbers.” Use this set of numbers to count things that are not people.

Finally,  we have the “human conjunctive numbers.” As the name implies, use these numbers to count people. Each set of numbers is just a little bit different. Are you confused yet?

Irish is an endangered language.

Irish is an amazing language with a rich history. It’s the “national and first” language of Ireland. It’s a required subject in Irish schools. And according to UNESCO, it’s “definitely endangered.”

Looking for Irish translation services? We can help with that!

6 thoughts on “11 Interesting Facts About the Irish Language”