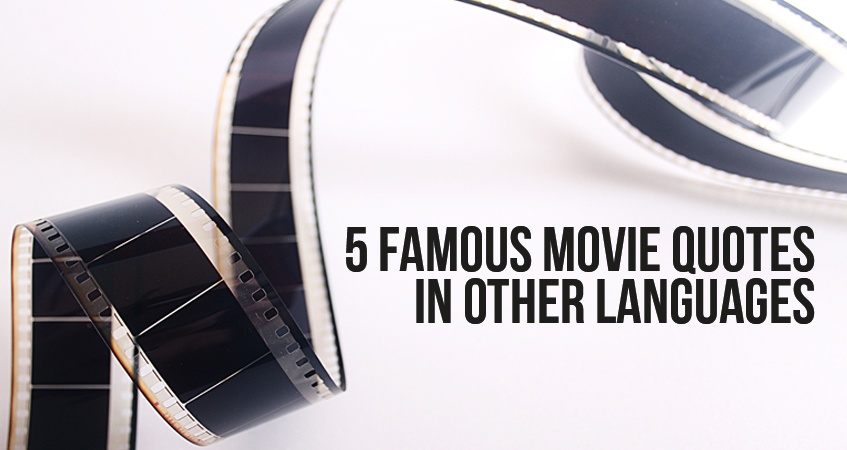 A good catchphrase can be the most memorable part of a movie.  These little sound bites get quoted and thrown around so much, even people who’ve never seen the movie are often able to recognize them. They can even become a permanent part of the language.

But translating them, whether for dubbing or subtitles,  can be quite tricky for a number of reasons. Catchphrases can use slang or idioms that are difficult to translate, they can depend on cultural references that may not make sense to foreign audiences, and the translations have to work within the limitations imposed by dubbing or subtitling.

So sometimes, that catchy quote that we hear in English doesn’t come out quite the same in foreign-language versions of the movie. Here are 5 examples of famous movie quotes in other languages. See how they’ve changed in translation:

This quote comes from the 1991 film Terminator 2, Judgement Day (as if you didn’t know.)  In the movie,  teenage John Connor instructs Arnold Schwarzeneggar’s humorless cyborg character to talk more like a human. In this case, a foul-mouthed early 90s teen:

John Connor: No, no, no, no. You gotta listen to the way people talk. You don’t say “affirmative” or some sh* like that. You say “no problemo”. And if someone comes on to you with an attitude, you say “eat me”. And if you want to shine them on, it’s “hasta la vista, baby”.
The Terminator: Hasta la vista, baby.

The Terminator then uses it when he offs the T-1000.

But that’s not what Spanish-language audiences heard. “Hasta la vista” is a common Spanish-language farewell that roughly translates to “Until I see you.” To keep the same edgy vibe, translators used “Sayonara, baby” for the Spanish translation:

And in Japanese? Apparently, he terminated the T-1000 with a deadpan “Cheerio then, love”

It seems tame now, but this line from the 1939 movie Gone with the Wind contained controversially strong language for the time. And Rhett Butler’s blunt, almost vulgar goodbye to Scarlett O’Hara didn’t carry the same edge in some of the translated versions of the movie.

Here are a few foreign-language variations:

German: Translated back into English, the German version of this line becomes, “To be honest, I’m completely indifferent.”
Russian: Meanwhile, in Russia, Rhett says, “Straightforwardly, my dear, I would not give you a damn.”
French:  French audiences heard“Franchement, ma chère, c’est le cadet de mes soucis, which translates to “Frankly, my dear, it’s the least of my worries.”

“Here’s looking at you, kid”

This line, from the 1942 film Casablanca, is such a familiar part of pop culture that it might never have occurred to you to wonder what it really means.

As you might expect considering the ambiguity, this phrase was given strikingly different translations around the world:

Japanese: The Japanese version of this line is “Cheers to your eyes,” which Manako Ihaya of the American Translators Association calls “a classic example of a good movie script translation.” It’s not word-for-word but it catches the same nuances.
German: Meanwhile, Germans get the very different “I am looking into your eyes, little one.”

“Nobody puts baby in the corner.”

Ah, the 80s. They gave us so much . . . including the 1987 dance movie classic “Dirty Dancing,” and this oft-quoted line, spoken by dance instructor Johnny Castle to the parents of his teenage girlfriend/dance partner.

In some languages, like French, Italian and Spanish, the line is translated almost word-for-word. But that wasn’t true everywhere, as the following examples show:

The German version is especially jarring to American audiences. Johnny is supposed to be standing up for Baby, not declaring ownership.

In the Huffington Post, writer Eleanor Bergstein explained why the translation was so different.

“The Germans are very, very careful about the mouths [of the actors] looking like what the words are,” Bergstein said. Because of this attention to detail, the line had to be altered. “It turns out that when Johnny goes up to Baby in the German version of the film, he says, ‘My baby belongs to me, this is clear.’”

“All work and no play makes Jack a dull boy.”

“All no work and no play makes Jack a dull boy” is an old English proverb. But it took on a new meaning after the 1980 film The Shining was released, with the lead character typing it over and over again before he goes psychotic and tries to kill his family.

Stanley Kubrick wanted to make sure that foreign audiences got a similar experience, so he had pages full of similar proverbs from other languages typed up as well.

Italian: Il mattino ha l’oro in bocca. Translation: The morning has gold in its mouth.

Spanish: No por mucho madrugar amanece más temprano. Translation: No matter how early you get up, you can’t make the sun rise any sooner.

French: Un Tiens vaut mieux que deux Tu l’auras. Translation: What you have is worth much more than what you will have.

Which one do you think sounds creepiest? The German version has my vote!

Catchphrases like these have a lot in common with good advertising and marketing copy. They’re concise, catchy and often use informal language and culture-specific references to make a point.

If you want your business materials to have the same impact in other languages as they do in English, you can’t just substitute one word for another. You have to take cultural considerations into account. If you’re translating for video, that adds additional complications as well. At K International, we’re well-versed in transcreation and marketing translation.

Contact us today to see how we can help you communicate with audiences around the world!