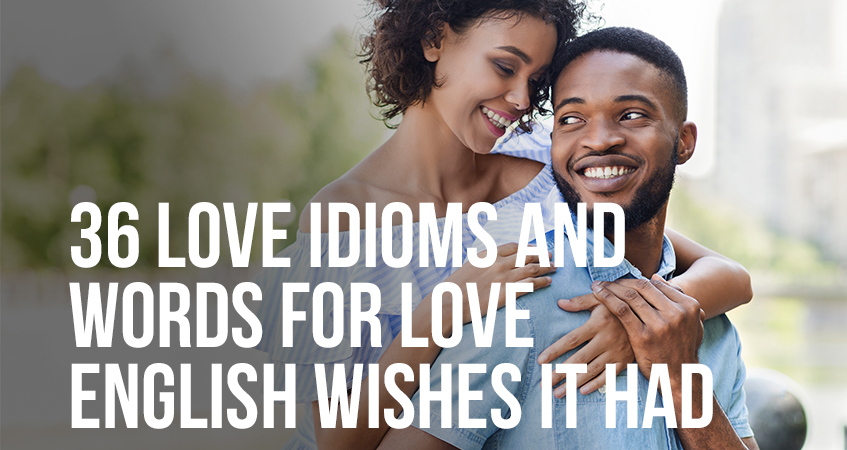 “How do I love thee? Let me count the ways.” Elizabeth Barrett Browning might have had an easier time if she’d incorporated some other languages in her poetry. Different languages use different words and phrases to describe different aspects of love. To celebrate Valentine’s Day, we went around the world to collect 36 of our favorite foreign love idioms, words, and phrases to help you better describe how you feel about your valentine:

Retrouvailles: This literally translates to “rediscovery,” and it’s a fitting way to describe your joy at being with your beloved again after a long separation.

Avoir des atomes crochus: This phrase literally means “to have hooked atoms,” but it translates to having great chemistry with someone.

La douleur exquise: Got a crush on someone unobtainable? This French phrase describes your pain.

Cavoli riscaldati:  Translating to “reheated cabbage,” let this Italian phrase remind you why reigniting that old flame might not be such a great idea after all.

“Chi ama me, ama il mio cane.” Literally, “he who loves me, loves my dog.” If someone loves you, they accept you as you are.

“Chiodo scaccia chiodo.” Literally “a nail drives out another nail,” this usually used to console someone after a breakup.

Cafuné: In Brazil, this is the act of running your fingers through your lover’s hair.  Brazil has always been a melting pot, and it’s possible this word was borrowed from the Kimbundu language of Angola.

Saudade: When “I miss you” isn’t enough, suadade is a “deep emotional state of nostalgic or profound melancholic longing for an absent something or someone that one loves. ”

Cheiro no cangote: To nuzzle someone’s neck with your nose.

Koi No Yokan:  Not quite the same as “love at first sight,” this is the feeling that you are destined to fall in love eventually.

Honmei-choko: Chocolates given because you love someone

Takana no hana: Literally, “a flower on a high peak.” This is used to describe a seemingly oblivious or unattainable love interest.

Yuanfen: The force that binds two lovers together, or the romantic coincidences that bring them together.

日三 秋 (yí rì sān qiū): Literally, “one day, three autumns,”  this expression implies that you love someone so much that every day without them seems to last 3 years.

夫妻相 / Fūqīxiàng: “Husband wife look,” for a couple who look similar enough that they seem like they’d be a good match.

撒娇 (Sājiāo) : To show your love for someone (and your lack of emotional maturity) by throwing a temper tantrum.

Gezelligheid: This word “can be translated as convivial, cozy, or  fun, but can also show someone belonging, time spent with loved ones, the fact of seeing a friend after a long absence, or the general togetherness that gives people a warm feeling.”

Een beschuitje met iemand willen eten:  Literally, this translates “to want to eat a rusk” with someone . . . with an implied “in bed” at the end.

Queesting: To invite someone into bed to snuggle and talk.

Hawa: The first stage of falling in love, from a root word meaning “a transient wind that can rise and fall.”

Alaaqa:  The second stage of falling in love, when you’ve just begun to get attached.

Ishq:  A “blind desire” for the one you love.

Huyum: So in love that you’ve lost all reason.

Y’aburnee or Tuqburni: This translates to “you bury me”, and means you hope that person outlives you because you don’t want to live without them.

Csókolgat: To shower someone with kisses

Anhimeln: To be so taken by someone it’s as if you’re staring at the sky.

Media naranja (Costa Rica): Why settle for being someone’s “other half” when you could be the other half of their orange?

Forelsket: That walking-on-air feeling you get when you first fall in love.

Litost:  That feeling you get when you run into an ex and you still aren’t quite over it yet. Basically, this:

Manabamate: Are you so in love you don’t care about eating? The Rapa Nui people of Easter Island have a word for that.

Mamihlapinatapai: That look two people share when each is waiting for the other to make the next move. According to the Guinness Book of World Records, it is the “most succinct” word in the world.

Viraag: Emotional pain caused by separation from the one you love.

Viraha: When it takes a separation to make you realize that you love someone.

Can you think of any other interesting or unusual words or phrases used to talk about love in other languages? We’d love to hear them, so post them in the comments. Oh, and Happy Valentine’s Day to you!