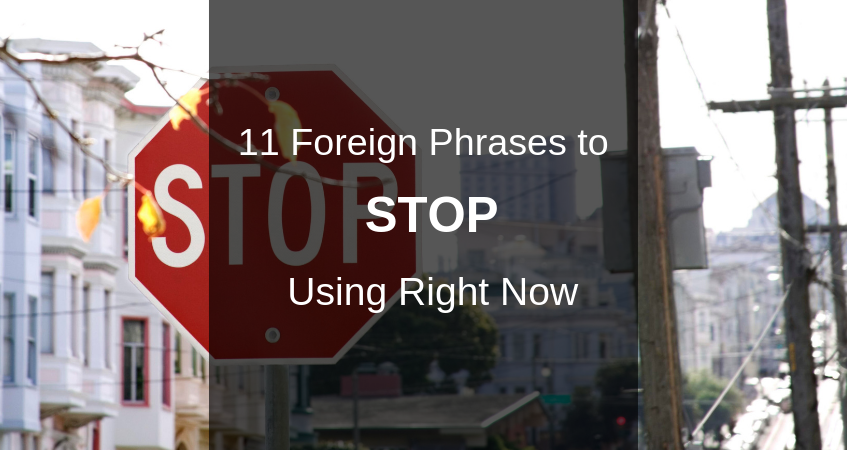 Some English speakers love peppering their speech with foreign phrases. We think it sounds sophisticated. But here are 11 foreign words and phrases that don’t go over quite as well in their home languages. Let’s all agree to stop using them now.

Phrases to Avoid in French

According to the Daily Mail, [you can’t really trust this poor excuse for a paper] language learning app Babbel has identified this innocuous-sounding phrase as one of the most common gaffes made by Brits abroad: “It literally invites diners to ‘a good digestion’, suggesting that they are so hungry that they are willing to jump at any food offered.”

There is, however, some controversy about this. A 2007 New York Times article, for example, quotes a French etiquette teacher who says,  “In France, ‘Bon appétit’ is not proper.” But an article in the Guardian a year later found that most Parisian locals had no problem with “Bon Appetit.” Ironically, the few people who did think it rude were English speakers.

So, perhaps the key here is to know your audience. [Our in-house French natives say there’s nothing wrong with it.]

Did you know garçon actually means boy? You might think you sound suave when you address your French waiter this way. But really, you sound like a jerk. Don’t be a jerk. Use “monsieur” instead.

If you’re visiting France, don’t expect the French to express dismay by exclaiming “Sacrebleu!” Unless, of course, you have a Tardis and you’ve time-traveled back to the 19th century.  And if you use it, expect to get some odd looks at best.

Watch out for this one if you’re American.  While we tend to use it as a fancy word for “main dish” or “main course”, in France it means an appetizer.

Yeah, yeah, it’s the French-language chorus of a famous sexy pop song. But it’s not likely to win you any friends in France, and it almost certainly won’t win you any bedmates.  It might win you a slap across the face, though . . .

Phrases to Avoid in Spanish

Well, at least the Terminator version of it. Spanish speakers do say “Hasta la vista!” But, as the Daily Mail points out (because apparently, it needs to be said) “while Arnold Schwarzenegger used it as a triumphant victory cry, it’s actually a cheery way of telling a Spanish-speaker you’re looking forward to seeing them again.”

It translates to “until I see you,” and is used as a friendly farewell.  Don’t add “baby” if you want to be taken at all seriously.

This just sounds dated and cliched. In the Dallas Observer, Gustavo Arellano explains the translation of the phrase (Caramba is a euphemism for penis), and why it’s not used as often as Western media would have you believe:

“Mexicans do say it—but nowadays not as often as gabachos would love to believe . . . Since caramba doubles for a vulgarity but was uttered much more frequently in genteel days, since it’s a printable expletive, and since gabachos have always wanted their documented Mexicans spicy and foul-mouthed, writers published the interjection as often as possible.”

This isn’t even proper Spanish.  Even Urban Dictionary agrees: “avoid using this expression in front of anyone who actually speaks Spanish as it’s not grammatically correct and people will instantly know that you are an American trying to look cultured.”

Phrases to Avoid in Italian

Are you cosplaying Super Mario Brothers? No? Then you should refrain from using this Italian exclamation. As the Daily Mail observed, “the phrase is universally considered to be antiquated and is best used solely for referring to Abba-themed musicals.”

Yes, you’ll hear it a lot in Italy. But use it carefully, or it could backfire. Some Italians consider it to be only appropriate amongst close friends and family.

Phrases to Avoid in German

Du is the easiest form “you” in German for English speakers to wrap their heads around. After all,  in English, we only have one word for “you.” But in German,  “du” is only used in informal situations. To be polite, you’d use sie with social superiors and people you don’t know that well. Otherwise, you sound disrespectful.

And this can be an expensive mistake, too. Calling a police officer (or any other government employee) du instead of sie could cost you a fine of €500!

When you’re speaking in a different language, sounding authentic without making a fool of yourself can be a bit of a challenge.  Fortunately, most of the time people are willing to forgive a minor faux pas from a new language learner.

But they’re less forgiving if you’re a business, which is why choosing the right language services company is so important.  At K International, our translation team is ready to help your organization avoid gaffes and put its best foot forward. Click here for more information on our services and feel free to contact us!