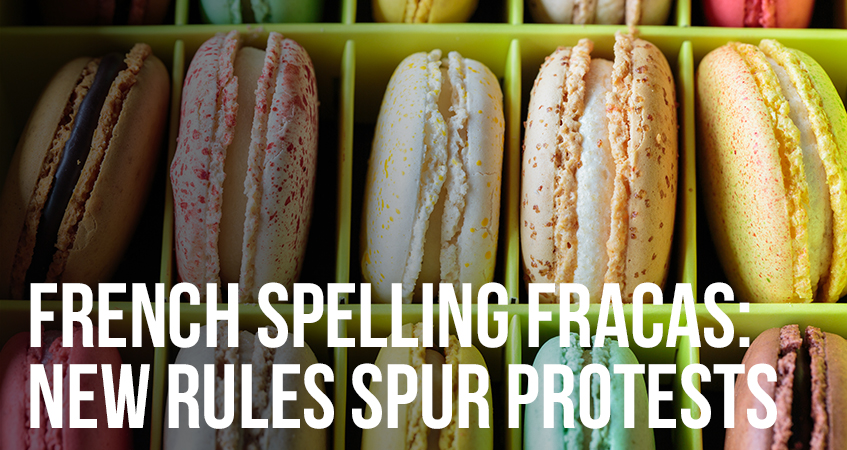 French speakers, take note: new spellings are coming for thousands of French words, and not everyone is happy about it. The spelling changes are an attempt to simplify the written language and make it more consistent, but language purists and politicians alike have been flocking to the virtual “streets” of social media in protest.

What’s Changing: Does An Oignon By Any Other Name Still Make You Cry?

The changes affect approximately 2,400 French words, and most of them fall into one of the following categories:

The reforms are designed to make French spelling easier to learn. For example, as Chantal Contant, a French linguist and professor at the University of Quebec at Montreal told The Star.com:

“Ognon already once existed in the dictionary and now they are bringing ognon in line with trognon de pomme (apple core), grognon (grumpy) and rognon de veau (veal kidney).”

These new spellings have actually been in the works for the past 26 years, but everyone felt free to ignore them until last week, when it was announced that they would be integrated into new French textbooks and curriculum. That made people upset. Very upset.

The change that seemed to cause the most angst was the demise of the circumflex accent. This little “hat” often indicates that somewhere along the way, a consonant was lost from the original word. For example, the word fête used to be pronounced (and spelled) feste. Over time, people stopped pronouncing the “s,” and a circumflex accent was added to the “e.” The accent mark is not disappearing from the language entirely- it will still be used as needed to distinguish meaning between two words that would otherwise be spelled the same.

The death of the circumflex may have been overstated, but that didn’t stop people from jumping to its defense. Angry language purists began tweeting support for the beleagured punctuation mark under the hashtag #JeSuisCirconflexe and #ReformeOrthographe. Many saw it as a sign that the French language was being “dumbed down.”

I always liked the circonflexe bc it usually marked the historical existence of a now-lost consonant, like s: hôpital, ancêtre. Also, it’s cute. Medievalists should mourn it’s passing. I’m going to wear a hat today in its memory.

And of course, politicians had to get in on the game, with The Guardian reporting, “The far-right Front National waded in with party vice president Florian Philippot declaring “the French language is our soul” and the centre right mayor of Nice Christian Estrosi calling the reforms “absurd”.

Why all the vitriol?

Pierre Favre, president of the National Schools Union, explained that for many people, mastering French’s orthographical quirks was a rite of passage of sorts, and they don’t want the next generation of schoolchildren to be spared:

“What makes this subject so controversial is that people are passionate about it. To change spelling touches on their childhood, reminds them of the pain, the effort, the successes needed to learn the rules and triumph. The circumflex accents are a kind of trophy.”

In and of itself, the row over the new spellings isn’t really surprising. Imagine what would happen if anyone tried to standardise the English language’s notoriously difficult orthography. Oh wait, people have been trying to do that for centuries without getting much traction.

What is surprising is that these reforms were first proposed by the Académie Française all the way back in 1990.  That’s 14 years Before Facebook, for all of you young people.  Ironically, when they were proposed, Académie Française secretary Maurice Druon wrote that “language is a living thing…Work should begin again in 30 years, if not earlier.” I wonder if he was factoring in a decades-long adoption period with that statement? It’s now been almost 30 years and the original changes are still controversial!

French Translation: Should You Use the Old or New Spellings?

A question for translators: When you translate to French, do you use the old or the (not so) new spellings? As it stands now, the new spellings are “recommended” but both spellings are technically correct according to the Académie Française. So, the right answer may depend on your target market, especially as students begin to learn the new orthography while older adults remain attached to the old. What do you think?

Are you in favor of the new spellings? Or are you team  circumflex? Let us know in the comments!