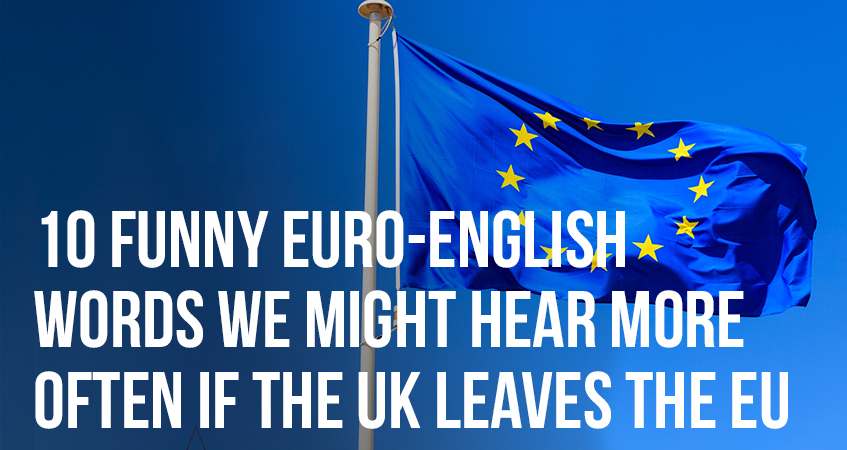 These days, it’s not just the UK and the US that are divided by a common language. Over the past few decades, English has become one of the most frequently used working languages of the EU.  However, most EU workers are not native English speakers. Enter “Euro-English,” an interesting dialect distinguished by common mispellings, mistranslations, false cognates and malapropisms.

These mistakes generally aren’t random. They are often influenced by the speaker’s native language. So, different people end up “misusing” the same words in the same ways over and over again, until the new meanings become commonly understood in the halls of the EU.

In 2013, a frustrated EU bureaucrat named Jeremy Stephen Gardner catalogued these “Euro-isms” in a delightfully curmudgeonly report called Misused English Words and Expressions in Publications. In the report, he explains  that

Over the years, the European institutions have developed a vocabulary that differs from that of any recognised form of English. It includes words that do not exist or are relatively unknown to native English speakers outside the EU institutions and often even to standard spellcheckers/grammar checkers (‘planification’, ‘to precise’ or ‘telematics’ for example) and words that are used with a meaning, often derived from other languages, that is not usually found in English dictionaries…

So, what happens if Brexit becomes a reality? That would leave the Republic of Ireland and tiny Malta as the only EU countries where English is an official language. Yet, EU workers and bureaucrats are unlikely to stop using it as a second language.

According to Quartz  and The Economist, that means “Euro-English” could diverge even further from the Queen’s English. And that means we could be hearing a lot more of these Euro-English words:

English Definition: Someone who performs in a TV show, play, film or other theatrical or broadcast performance. “Do you think Tom Cruise is a good actor?”

Euro-English Definition: Via Misused English Words, “The people and/or organisations involved in doing something”. It is also used for countries involved in EU activities and initiatives. Shakespeare may have said “All the world’s a stage,” but I don’t think this is quite what he had in mind.

Sometimes, “actor” morphs into the term “actorness,” which the guide defines as ‘the quality of being an actor’ and calls “an extraordinary creation” that “is both quite impenetrable and slightly childish.”

English Definition (via Merriam-Webster) 1) real and not merely possible or imagined;  existing in fact 2) known to be correct or precise : not false or apparent.

Euro-English Definition: Current. “The actual budget is more generous than the budget for next year.”

Origin: False cognate with words that mean “current” in several other EU languages, such as actueel in Dutch and actuel in French.

English definition: 1) A cupboard with drawers or shelves. 2)  In politics, a group of advisers to the head of state.

Euro-English Defintion: A private office. “He has retired to his cabinet.”

English definition: There isn’t one. Because it does not exist.

Origin: According to Misused English Words and Expressions,  “it is formed from a misspelt stem (committee has two ‘m’s and two ‘t’s) and a suffix that means something quite different (-ology/-logy means ‘the science of ’ or ‘the study of .” While no longer an “official” EU  term, the word is apparently still in use.

English Definition: To make something or someone late, or a period of time by which an event is later than expected.

Euro-English Definition: A deadline. Often used in admonishments to “respect the delay.”As Gardner points out, this is quite literally impossible in English and another instance where the EU defintion of a word contradicts the standard English definition.

English definition: To throw out, as with garbage.

Euro-English definition: “To have” or “to possess,” according to Misused English Words.  Again, this word that takes a trip to Opposite-Land in Brussels; once you’ve disposed of something you cannot by definition still be in possession of it.

English definition: To predict, like an oracle or fortune teller.

Euro-English definition: To plan for, include or provide for.

Origin: The French “prévoir” and German “vorsehen” both have a similar root to “foresee,” but are used differently in their respective languages than they are in English

English definition: To encourage someone to do something violent or illegal. For example, “he was charged with inciting a riot.”

Euro-English definition: To encourage someone to perform a desirable action or behavior, such as buying an electric car.

English definition: This is not an actual word.

Euro-English definition: Planning.  Here’s an actual example from Misused English Words: “Simplified procedures and better planification should make it possible to even out the caseload under FP6, improving internal control and speeding up processes.”

English Definition: The chance something will happen. “There is a possibility of rain tonight.”

Euro-English Definition: Opportunity; the chance for something to happen. “I have the possibility to travel next year for work.”

Would we see more of these EU-isms if the UK were no longer around to play language police? It’s hard to say. but in any case it’s an interesting example of how the world is changing English even as English changes the world.