This blog post has been adapted from a presentation I gave this week to the Key Account Management Club at Cranfield School of Management. I spoke about the importance of professional translation in relation to communication and what can happen when it all goes wrong.

It was for an ‘after dinner’ speech, so I wanted to make it as informal/funny as possible while still communicating the key message. This isn’t a transcript of what I said but it’s close enough and is in the same style as the original talk.

For those of you who don’t know me, my name is Richard Brooks. I graduated from Cranfield 10 years ago (MBA class of 2005) and have been working on/at K International, a UK translation provider, ever since. Initially in a general management position, then after leading a management buyout 2 years ago, I am now the Chief Exec of the organisation.

Whenever I meet new people (very fortunate that I have that opportunity regularly), I always seemed to be asked the same questions. So being as we’re all friends (or will be soon), let me cover these questions quickly and get them out of the way.

What languages do you speak?

The first question I (almost) always get asked after telling people what I do for a living is, “oh, so what languages do you speak then?” Let me answer that with a story…

I was in Bangalore last year at an international conference about content creation. Sitting on the front row because I was about to present next and listening to the host introduce the conference. He welcomed everyone and said he was proud that there were so many people from all over the world coming to his city to talk about the future of content creation. After that he said that it’s especially beautiful because people in Bangalore speak many languages. He asked the audience, “Can you raise your hand if you speak 3 languages or more”… I turned around and I think almost everyone’s hand was raised. He then asked everyone who speaks more than 5 languages to put their hand up – more than half the audience had their hand raised. He then said, “just for fun… is there anyone here who only speaks one language?” The little voice in my head said, “oh Rich… this means you… you should put your hand up” so I did.

And people started to laugh. Instead of taking my hand down I kept it up and the titter of laughter became louder. The host looked around, finally noticed it was me with my hand up, smiled and said, “ladies and gentlemen, our next speaker, Mr Richard Brooks”.

So, no… apart from the terrible French I speak with my in-laws I don’t speak any other languages. Which is a good thing. Translation is an incredibly specialised discipline and I have a great team who look after the day-to-day logistics of the art of translation. If I was a translator no doubt I’d get involved too much and wouldn’t be able to manage the business. I am very fortunate to be surrounded by an amazing team of linguists who handle the specificities of language translation.

Do you use Robots to do the Translation?

After the first question, this normally comes second.

Sometimes I say yes… we have a guy, he’s called C3PO, he’s fluent in 6 million forms of communication. All we have to do is to ask him what’s what and he lets us know.

And then the killer question.

Do you just use Google Translate?

OMG. Where do I start? I get asked this a lot… as do a lot of my translator friends.

The final straw was when I was working an opportunity to translate half a dozen curry sauce packs for a guy from Leicester. I liked the guy (we were from the same small town) and we’d been working on the project for a few weeks so I let him have a super good price (min charge sort of thing). Which take my word for it was/is an absolute bargain.

I said… “no, this is going to be translated by a professional translator who works with food all day long, then proofed by a 2nd guy, then checked in-house, then checked with the food legislation people, then artworked, checked again and sent to your printers as a PDF”

he said… “no mate, google is free, why should I pay you anything?”

and with that, I lost the project.

Well… I got so angry… I wrote a blog post. I won’t spoil it for you, it’s here if you want to read it > why can’t I just use Google Translate?

But this video helps…

Pretty funny… it’s not as if it’s your brand they’re laughing at, right?

But they all Speak English

A little short-sighted this… but I have heard it. I tell people its confirmation bias. i.e. wishful thinking as its only the people on holiday who speak to you in English because the ones who don’t can’t.

I was in Norway a while back and while my friend went into the Vinmonopolet I waited outside. A man who I assumed because of his clothes was homeless came up to me, held his hand out and said something in Norwegian. I said, “sorry my friend I only speak English”, he said in perfect English, “can you spare any change?” (I gave him what I had… I had to!) So yes. English is widely spoken but… as Willy Brandt, Former Chancellor of Germany puts it in his famous quote.

“If I’m selling to you, I speak your language.

Which translated into English means

“If I’m selling to you, I speak your language.

If I’m buying, then you need to speak German!”

Common sense if you think about, but its amazing how many companies think that customers all over the world will consume their products/services without proper language translation.

Why are Brits so bad at speaking foreign languages? I don’t know the answer, but we can all laugh at ourselves because of it. One of my favourite examples being Only Fools and Horses.

So when Del Boy stares off into the distance and says, “bonnet de douche Rodney” I assume he meant to say c’est la vie but anyone who’s stayed in a Premier Inn knows that bonnet de douche is the French for shower cap.  Or when the stock market crashed and he said: “Chateau neuf de pap” (a brand of wine) it’s hilarious, I think because there’s a lot of truth in it.

There are some absolute crackers in the following clip. That reminds me, I must get the Only Fools and Horses boxset for Christmas this year.

Vive la France as they say in Rome!

You say cheers or good health or chin-chin when you have a drink with your friends. Many western tourists do this when they go to Japan (why wouldn’t you)… well chin-chin is slang for penis. So you’re actually saying (probably quite loudly in a bar) penis. This will make your Japanese date laugh (hopefully you won’t get a slap).

Just FYI… the correct thing to say is Kanpai (Japanese characters it looks like this 乾杯 ) and literally means dry the glass. Its pronounced kan-pie. Or you can do what I do and always insist on toasting the Queen.

I have a lot of examples of where a product has been anglicised (for whatever reason) and it makes it funny. These speak for themselves. 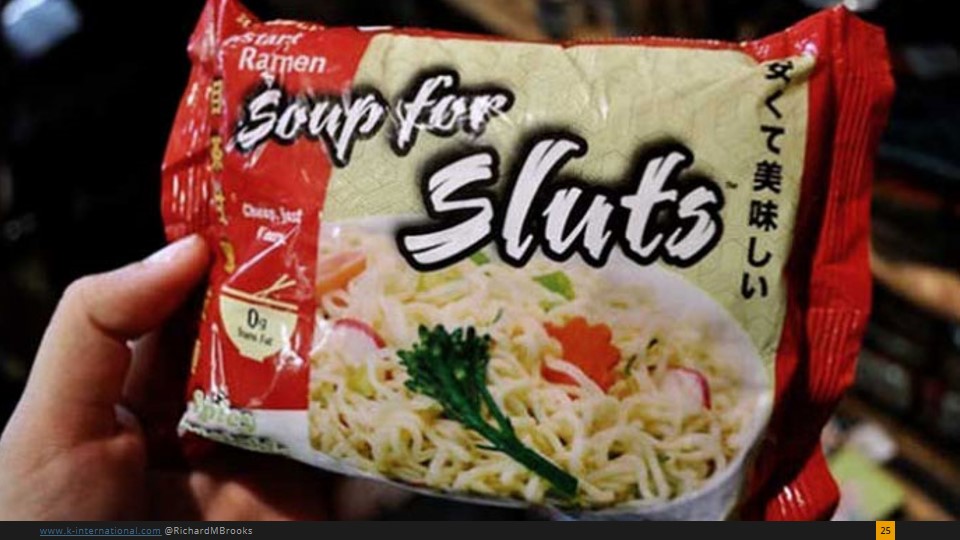 Not sure about this one… I think its a derivative of the pasta dish the ‘ladies of the night’ used to eat in Germany to keep their energy up. 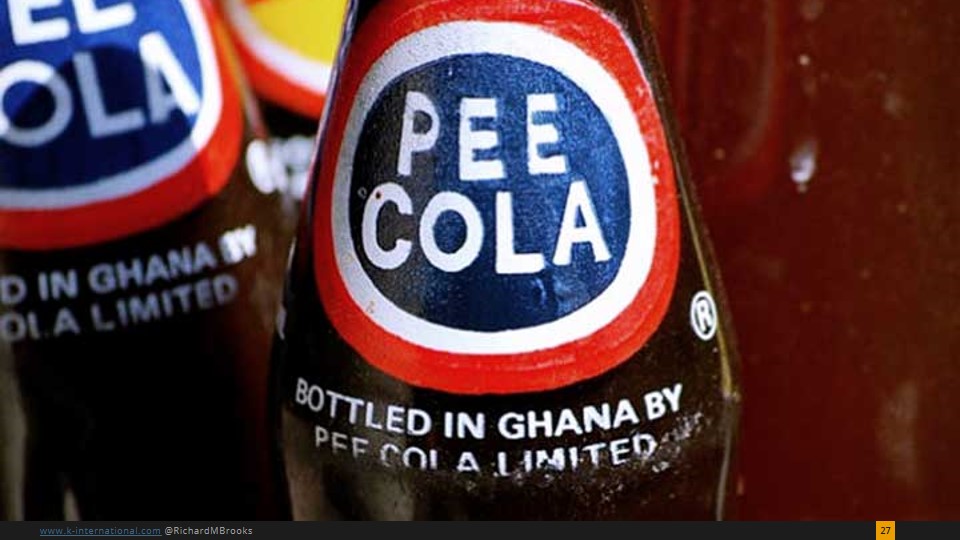 Again, no idea. But I wouldn’t want to do the Pepsi Challenge with it. 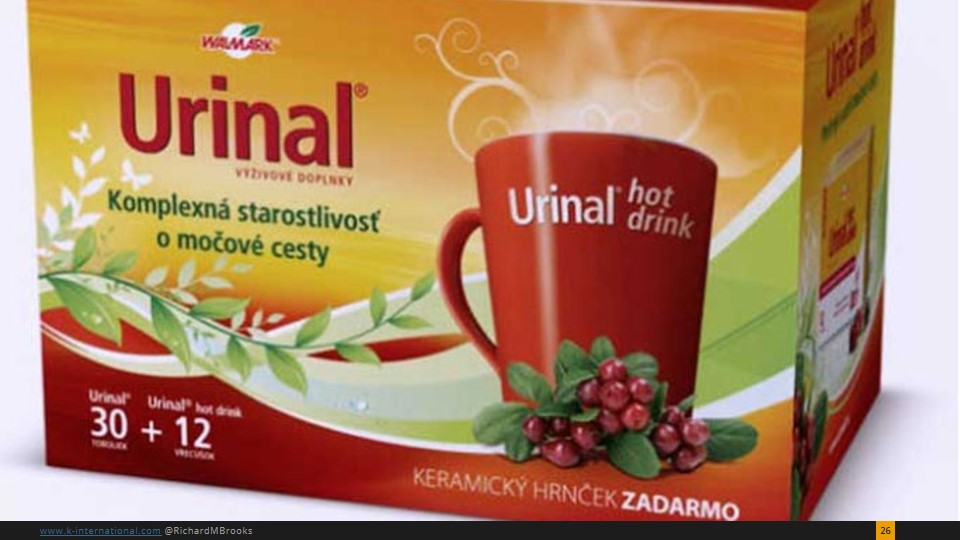 A urinal hot drink? erm ok… but when we translate it back into English you find its a drink to help with the waterworks. So… its nearly there, trouble is its hilarious and you’d never buy it if you could read English.

Its not just the translation you need to be careful of, its the workflow as well. Let me give you a couple of examples. 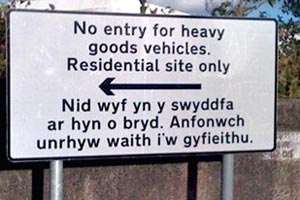 The first (quite a famous one in our industry) is when Swansea council used an in-house provider to produce the translation for them.

The story goes that they emailed the internal department and asked them for the Welsh translation of ‘No entry for heavy goods vehicles. Residential site only’, they then received some Welsh text back, assumed it was the translation, created the artwork, had the sign made and then installed it.

The problem was that the internal department weren’t actually working that day, so the response was in fact an automatic out of office notification. It looked Welsh so they went to print. 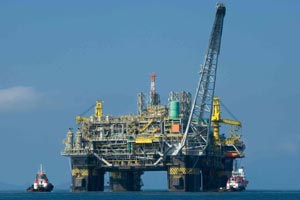 It happens in the corporate world too. We pitched on a project few years back for a VERY large oil company selling exploration technology to Russia. They called us in to present, which went well and then we got to meet the design team who were creating the documentation which needed to be translated. Their studio director said to me,

I said, “we’re translators, give us the documents, we’ll translate them, re-create the layout, QA it and get it back to you ready for print”

she said, “well that’s the thing. The computer does all that for me, watch this”

She then opened an English file, selected all the text and changed it to a Cyrillic font and said “Voilà” (the irony). I started to laugh, she looked at me with a blank expression on her face and said “what?”. I said, “it might look Russian but its just nonsense, it might as well be in wingdings. She said that the client had never complained before and that they’d been doing it like this for 18 months and didn’t see the sense in changing the process (her’s was free mine wasn’t).

We didn’t win the client.

I’ll end on this popular meme. Translation is like toilet paper but no one thinks about it until they need it. 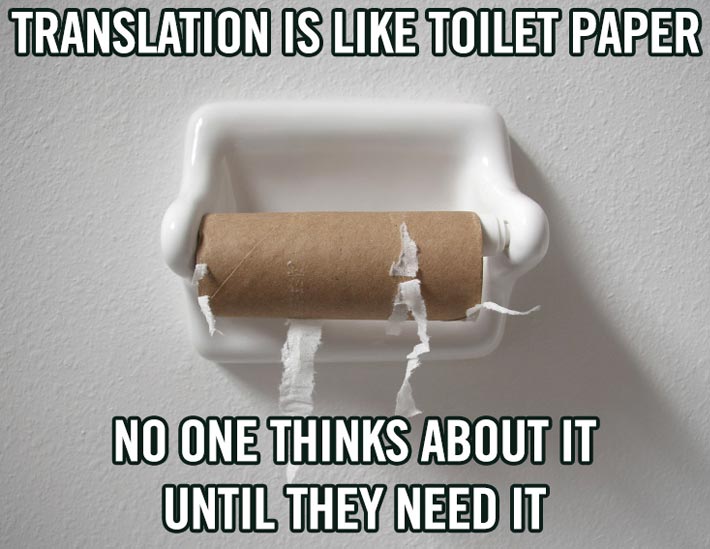 Translation is important and it needs to be treated with respect.