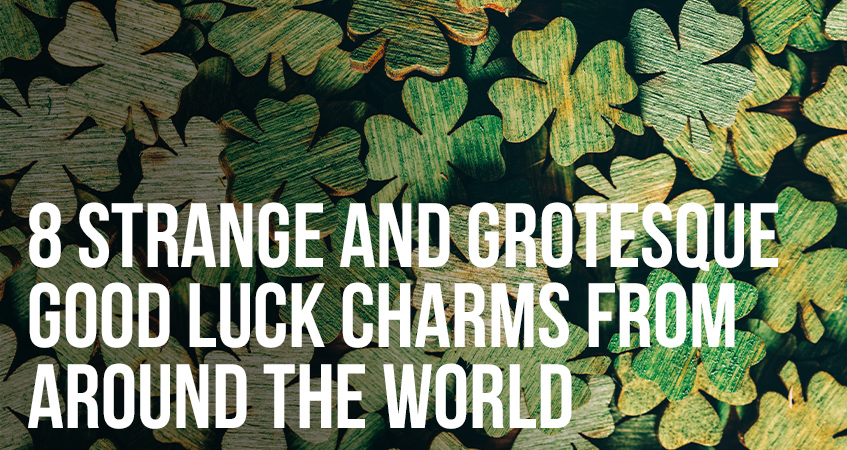 Happy St. Patrick’s Day! The Irish have made four-leaf clovers famous for good luck. But other cultures have their own good luck charms, and some of them may surprise you…or even haunt your nightmares. Here are 8 strange good luck charms from around the world:

Good Luck Charms From Around the World: Nazar

You’re probably familiar with the English saying “If looks could kill…” but some cultures take this belief more seriously than others. In fact, belief in the “evil eye,” a curse delivered by a malevolent or jealous glance, is common around the world, even today.

In Turkey and other nearby regions, people defend against the evil eye with eye-shaped amulets called nazars. These round glass amulets are designed to look like lidless blue eyeballs. They protect you by meeting harmful gazes with their own unblinking stares. They are always watching. They never blink. Frankly, it’s a little creepy.

Good Luck Charms From Around the World: Lucky Rabbit’s Foot

The practice of carrying around a rabbit’s foot for good luck dates back to around 600 BC in Europe. It’s also a common superstition in China, Africa, and the Americas.

Traditionally, not just any rabbit’s foot would do. At least according to North American folklore, you need the left hind foot of a rabbit captured in a cemetery. And during a full moon. Or a new moon. You might also need a silver bullet.

Good Luck Charms From Around the World: Three Legged Toad

It might look like the freakish survivor of a nuclear winter, but according to the Chinese, a three-legged, red-eyed toad called the Jin Chan is a bringer of good fortune and prosperity.  Statues of the toad are placed in homes and businesses to ward off bad luck and attract money.

Good Luck Charms From Around the World: Fascinus

The ancient Romans also believed in the evil eye.  But they didn’t use nazar to keep it away. Instead, they relied on a more characteristically Roman amulet-the fascinus. What is a fascinus, you ask? An effigy or amulet that symbolizes the divine phallus.  Basically, it’s a lucky penis.  Some of these amulets even had wings.

And how did it protect against the evil eye? According to Wikipedia,

“A graphic representation of the power of the fascinus to ward off the evil eye is found on a Roman mosaic that depicts a phallus ejaculating into a disembodied eye.[8] The motif is also known from multiple relief sculptures from Leptis Magna in present-day Libya.[9]“

Good Luck Charms From Around the World: Scarab Beetle

Amulets shaped like the Scarab beetle protected Ancient Egyptians from all manner of misfortunes.  Scarab beetles were seen as the embodiment of the sun god Ra. Just as Ra rolled the sun across the sky each day, so the scarab beetles rolled balls of dung across the grass to nourish their larvae.

Yes, that’s right. The kingly scarab beetle, a symbol of Egyptian royalty and good-luck charm for Egyptians of all walks of life, is just a type of dung beetle.

Good Luck Charms From Around the World: Red Bat

In Western cultures, bats are emblems of the occult. Companions to witches and vampires, they are not exactly omens of good fortune. In China, however, the red bat symbolizes the “five good fortunes:” health, long life, love, wealth and virtue. Images and amulets showing a red bat protect the bearer from evil and bring happiness and luck.

Good Luck Charms from Around the World: Carp Scales

In Poland and certain other Central European cultures, the scales from a carp eaten for Christmas Eve dinner are carried as a good-luck charm for the rest of the year.

Good Luck Charms from Around the World: Tumi

Our final strange good luck charm comes from Peru. The Tumi is an ornate ceremonial axe. Today, it is the national symbol of Peru. People commonly hang it on the wall as a good luck charm. However, it has a far more grisly history.

Tumi were used by the Incans and earlier Pre-Incan cultures to perform religious sacrifices. For example, during the annual festival celebrating the sun god,  a priest would use a tumi to cut the heart out of a llama and use its entrails to divine the future. Tumi were also used for trepanation, an ancient form of surgery that involved removing a piece of skull.

It’s important to understand how different cultures perceive the images your business uses in its marketing and communications. They don’t always carry the same meanings from country to country, and that can make it more difficult to communicate your message clearly and effectively.  A good translation company can help ensure you get your point across, no matter where your customers are from.

Can you think of any other unusual or interesting good luck charms? Share them in the comments!