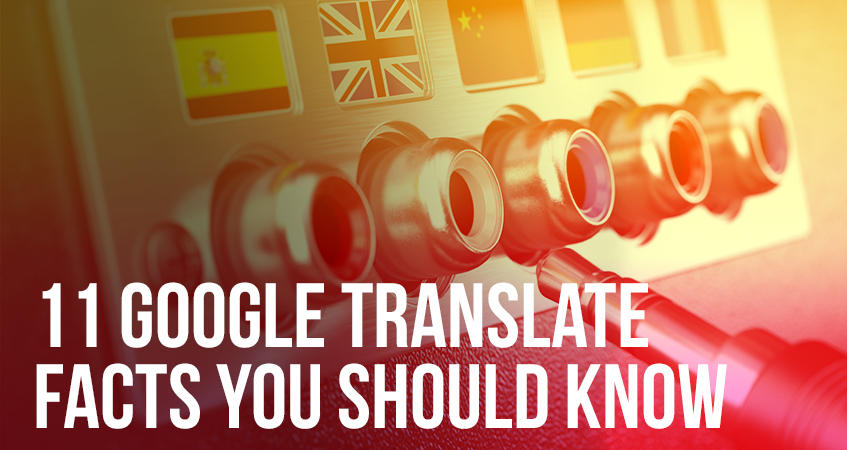 Google Translate turned 10 years old last week. With the power of the Google empire behind it, it’s the world’s most popular machine translation tool. At K International, we can’t help but see how Google Translate has helped people communicate when professional translation is unavailable. However, we are also familiar with the consequences of relying on it too heavily. To celebrate our decade-long love/hate relationship with this service, here are 10 Google Translate facts you should know.

According to the Google Translate blog, the service has more than 500 million users. That’s close to the entire population of the European Union, which has 508 million inhabitants. When Google released Google Translate in 2006, the number of users was measured in the hundreds.

That’s roughly equivalent to a stack of 128,000 Bibles, every single day.

When it was launched 10 years ago, it only supported two: English and Arabic.

4. 92% of Google Translate users are outside of the US.

Brazil has the highest number of users.

5. It has sound effects.

Got some time to kill? You can make Google Translate into a beatbox. The original beatboxing Easter egg was apparently removed in 2015.  However, as seen in this YouTube video, you can create an acceptable substitute using the right letters and the right languages.

Google Translate “translates” by mining an enormous database of translated material and looking for patterns.  What’s in the database? Three of the biggest sources are:

7.  Google Translate is more than a webpage.

You don’t have to be online to access Google Translate. Download the Android app, and you can get a rough translation of 90 different languages on your smartphone without using any data.

With the WordLens app, you can also translate words in pictures, no typing required.

For example, Google celebrated the new “Star Wars” movie by temporarily allowing users to translate to and from the Aurebesh alphabet.

9. You can report inaccurate translations.

“A few properly translated sentences can make a huge difference when faced with a foreign language or country. By reviewing, validating and recommending translations, we’re able to improve the Google Translate on a daily basis.”

10. The most widely requested languages for translations are from English to Arabic, Russian, Portuguese and Indonesian.

Is your business fluent in these languages? Should it be?

11. Google doesn’t use Google Translate for its own business translations (and neither should you).

Google Translate is an amazing tool for the right situations. For example, it’s helpful for getting the gist of a website written in another language. It can save time and frustration for travellers when nobody else speaks English. Refugees, victims of natural disasters and the aid workers who serve them have benefited from the tool when a human interpreter simply wasn’t available.

But that doesn’t mean it can replace human translators. Google Translate usually does provide translations that are “good enough” for a reader to figure out what the source text was about. That said, it rarely produces good translations. The service is prone to errors both large and small, and in a business context, details matter. See Why Can’t I Just Use Google Translate? for a story about how relying on Google Translate for packaging could have landed a retailer in legal hot water.

Even setting potential legal issues aside, it’s still a bad idea to court international customers with mediocre translations. Your company probably spends a lot of time getting even the most mundane customer-facing communication right in English.  Why would you allow Google to mangle your carefully crafted content?

Google Translate has many perfectly sensible and viable uses, and it’s a most impressive intellectual and technical achievement. But … Google itself wouldn’t think of using Google Translate to produce its publicity literature in the languages in which it sells its services. It uses human translators to do that.”

Even Google knows better than to use Google Translate for its business communication. Google is smart. Be like Google.

“[E]xcited and proud of what we’ve accomplished together over the last 10 years—but there’s lots more to do to break language barriers and help people communicate no matter where they’re from or what language they speak.”

While we seriously doubt Google Translate will be able to produce document translation to the level of a professional translator any time soon, that’s definitely a worthy goal that we can get behind. Happy birthday, Google Translate!

Tags: Google translate
Previous Post These Sign Language Translation Gloves Won a Prize, But Can They Really Translate?
Next Post Translation News Round Up: 9 Stories to Keep You In the Know