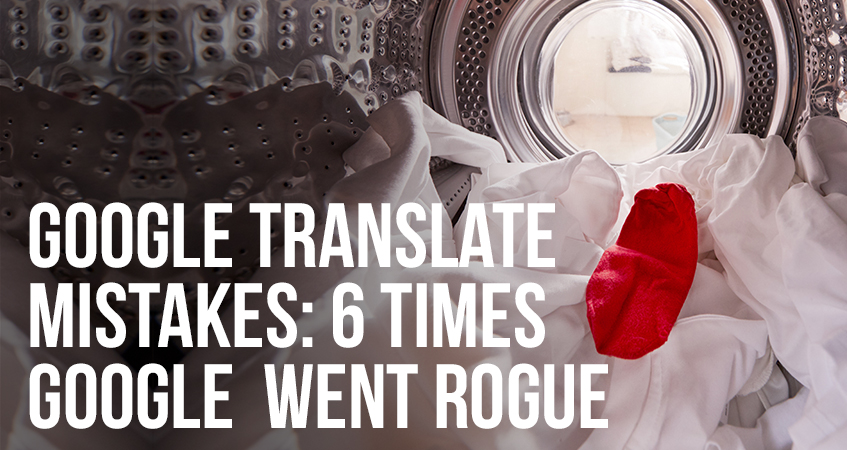 On the surface, Google Translate might seem like a simple, free translation service for businesses.  But don’t be deceived. Machine translation systems make all sorts of mistakes that a human translator could easily avoid. Still, it’s free. What’s the worst that could happen, you ask? If you choose to use Google Translate, don’t be surprised when it goes rogue and:

Last January, online LGBT activist group All Out started an online petition against Google Translate. The problem? The service was suggesting a number of offensive slurs as synonyms for the word “gay.” According to All Out:

“500 million people use Google Translate every month. That’s a lot of people being taught hateful words and insults…Google already has the technology to filter out hateful language: typing “female” doesn’t throw up sexist words.”

It’s easy enough to understand how this could happen. Basically, people are jerks. The words they use to describe certain classes of people may not align with the words your business (or, you know, decent humans in general) wants to use. Google Translate basically guesses at word meanings by comparing documents and web pages in different languages. This causes translation errors that Google then has to manually fix, as they did with this particular bug.

Takes a Trip to Fantasy Land

Unless you’re in the cosplay business, you probably don’t want Russia to be translated as “Mordor.” But that’s exactly what happened earlier this month. Screenshots began to surface showing Google Translate translating the words “Russian Federation” in Ukrainian into “Mordor.”

Again, this error crept in because Google Translate can’t understand context. In this instance, unhappy Ukrainians were actually using the word “Mordor” to refer to Russia after it annexed Crimea in 2014.  But that doesn’t mean you would want to translate “Russia” as “Mordor” in all or even most cases.

Talks Dirty to your Audience

This has to be one of the funniest Google Translate mistakes of all time. The small Galician town of As Pontes was scandalised last year after they used Google Translate for a blurb on their website advertising the local grelo festival. Grelo is a type of vegetable. Unfortunately for them, when Google translated the text from Galician to Spanish, grelo became clitoris. So, instead of advertising the local vegetable-tasting festival, they were advertising something much more stimulating.  According to the Guardian,

Talk about giving visitors the wrong impression! No word on how many out-of-towners showed up for the festival and left disappointed.

As Pontes was planning to sue Google over the poor translation (no joke!), but hopefully the town government realized that the money they’d spend on a lawsuit could be better used on trained, human translators and thought better of it.

In 2014, researchers noticed that for some reason, Google Translate was translating Lorem Ipsum placeholder text in a very strange way. Although Lorem Ipsum is basically bastardised, nonsensical Latin, terms like “NATO” and “China” would come up.  There were so many political-sounding phrases in the translation that some people assumed it must have been a secret code of some sort. However, it was probably just bad machine translation.

Back in 2005, Google Translate would translate the sentence “Britney’s mom is very nice” into Spanish as “The breast of Britney is very pleasant.” Meanwhile,  “my mom is nice and cool”  would come out “My breast is pleasant and fresh.”

Google Translate has historically struggled with geography. For example, as shown in Search Engine People, for a while it would translate “I love Sweden” into “I love Canada.” Meanwhile, “Amsterdam” translated from Dutch to English was “London.” While they’re both the capital cities of their respective countries, the similarities pretty much end there.

Most if not all of these errors have been fixed by now. But there will always be more, at least until the machines gain consciousness and take over the world. And it’s not just big flashy errors and absurdities you have to worry about, either.

Most of the mistakes Google Translate makes are far more mundane- the wrong word here, an especially awkward turn of phrase there.  But is that really how you want your business to be represented to non-English-speaking customers? We hope not!

If you’d prefer to get it right the first time, check out our document translation services and get in touch. We’d love to help!

What are the funniest Google Translate mistakes you’ve seen? Let us know in the comments!

Previous Post Translation News: 5 Stories to Keep You In The Know
Next Post 5 Translation Industry Predictions for 2016