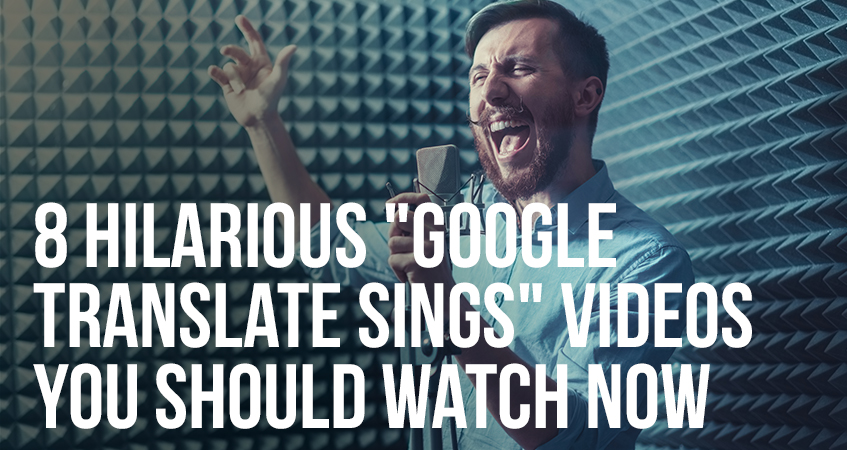 Bored? Looking for an excuse to procrastinate? We’ve got you covered! These 8 brilliant “Google Translate Sings” music videos are guaranteed to brighten up your workday. Hopefully, they’ll also make you think twice about using Google Translate for your business needs.

For Princesses of All Ages — Google Translate Sings “Let It Go”

In this case, Google Translate turns what should be an empowering song about embracing your own abilities into something more nihilistic: “Give up! Give Up!”

This one is perhaps best enjoyed after your little Disney princess is in bed, possibly with a glass or more of wine.

Technically, this is not a “Google Translate Sings” video, since it’s performed by completely different people. But it’s the same concept: the lyrics to the “Fresh Prince of Bel-Air” theme song, translated into every language on Google Translate and then back into English.

In the TV series, Will Smith plays a good-hearted but street-smart teenager whose mother sends him away to live with relatives after he gets in a fight. Google Translate’s version has the character hitting his mother, kissing his cabdriver, and exclaiming “I bring fear!”

Pro Tip: Hit the “Stop” button about 30 seconds from the end to avoid the annoying, repetitive, auto-tuned pleas to “Subscribe” to the CDZA YouTube channel.

Sure, “a rose by any other name would smell as sweet.” But the Bard’s verse would not sound as sweet in any other language, at least not with Google Translate as the translator.

“Living or decomposing? It is a problem,” just doesn’t have the same ring to it as “To be or not to be. That is the question.”

Google Translate does Freddie Mercury’s already hard-to-follow lyrics no favors. In fact, about the only thing that Google Translate gets right in the entire 6-minute song is “Galileo.” This video will leave you with questions. So many questions. Questions like “How did “Goodbye, everybody” turn into “Zumba all?” And “why is the German so very angry?” And perhaps most importantly, “Why is it so very important to have one D?”

Feeling Classy? Google Translate Sings “The Phantom of the Opera”

Erik, the Phantom of the Opera, turns into “the Demon to the Opera” in this remake courtesy of Google Translate. Even better, he’s a “cocky demon!” Google Translate manages to capture the spirit of this video perfectly when it transforms the phrase “strange duet” into “ridiculous unison.”

Even If You’re Not a Miley Cyrus Fan: Google Translate Sings “Wrecking Ball”

Can’t stand the thought of singing “Mary Had a Little Lamb” to your little lamb even one more time? Welcome to the twisted world of Google Translate nursery rhymes! Here, Mary’s little lamb has “fleece that’s white like an eyeball is,” the Muffin Man is also known as “man cakes” and Baa Baa Black Sheep talks about “canning” a toddler.

Because a Picture is Worth a Thousand Words: Google Translate Sings “Blank Space” (featuring Google Images)

This Google Translate parody of Taylor Swift’s “Blank Space” is illustrated by images plucked from a Google Image search of the translated lyrics. So, “Got a long list of ex-lovers” = “adulterer with enthusiasm” = Tiger Woods. Yep, that makes sense.

These videos are a fun way to kill some time, but they also highlight Google Translate’s main weakness: there is no human oversight. Without a human to catch mistakes, the songs’ meaning gets scrambled and eventually lost.

So, while Google Translate may seem like a convenient and free way to handle translation, you should not rely on it for situations where accuracy is important. Instead, choose a professional translation services provider who can give you an accurate translation.

Which video was your favorite? Let us know in the comments!

Previous Post 12 Fun Facts About the English Language for UN English Day
Next Post These Sign Language Translation Gloves Won a Prize, But Can They Really Translate?