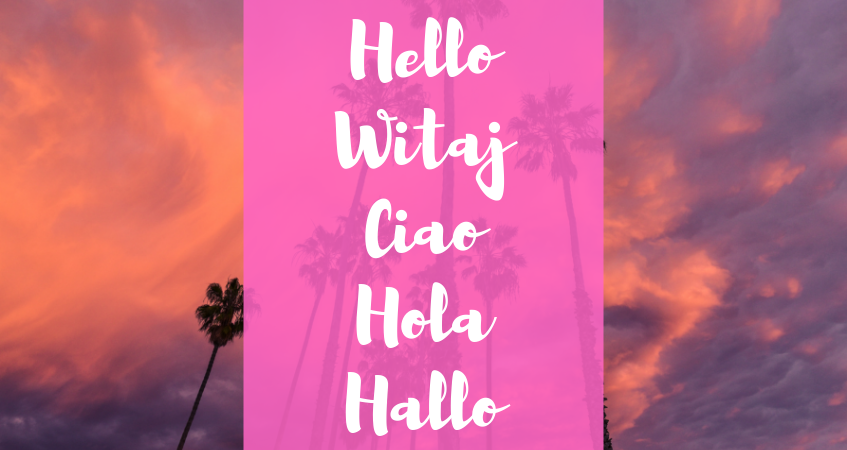 Did you know that the 21st of November is World Hello Day? To celebrate, learn how to say hello in 15 languages today!

Participating in World Hello Day is as easy as saying “Hello” to ten people. But what if they don’t speak your language? No worries, we’ve got you covered. Here’s how to say “Hello” in 15 different languages, along with some etiquette tips for greeting people from different cultures.

How to Say “Hello” in 15 Languages

How to Say Hello in French

Use “salut” only for close friends and family. For everyone else, use “bonjour.” When meeting a stranger, it’s polite to shake hands . . . quickly, and with a light grip.

Friends, family, and acquaintances may greet each other with a kiss on the cheek. However, the French are not huggers.

How to Say Hello in Spanish

In most Spanish-speaking cultures, it’s polite to shake hands with strangers and acquaintances you don’t know well. Between people who know each other, air-kissing is a common way for women to greet each other and for men to greet women.  Men often hug.

How To Say Hello in Russian

When greeting strangers or acquaintances,  shaking hands is the preferred greeting.  Russians generally go for firm handshakes. Don’t shake hands over the threshold of a door, as this is considered bad luck.

Need some help with pronunciation? Here you go:

How to Say Hello In Chinese

Roughly translated, this means “Are you well?” When greeting someone in China, shaking hands, nodding or bowing are all considered polite. Always greet the eldest person in a group first.

How to Say Hello in Italian

If you’re saying hello to a group of people, make sure you greet everyone individually. Handshakes are appropriate for strangers and acquaintances, while air-kissing is the usual way to greet friends. It’s considered good form to maintain eye contact and to greet the most senior members of a party first.

How to Say Hello in Japanese

In Japan, bowing is customary when two people greet each other. Shaking hands has become more accepted due to Western influence but it’s still somewhat uncommon. Other, more demonstrative forms of physical contact are not common and generally unwelcome.

How to Say Hello in German

Germans typically shake hands when they greet each other, even if they’ve already met. Eye contact is important.

How to Say Hello in Portuguese

Shaking hands is the norm when you greet people you don’t know well in Portugal, although friends may hug or exchange kisses on the cheeks. Greetings in Brazil are a bit more informal, and it’s normal to get a peck on the cheek even if you just met the person. Men do not kiss; they hug instead.

How to Say Hello in Korean

The standard Korean greeting means “Peace.” Isn’t that lovely? In Korea, bowing and shaking hands are both acceptable. When Koreans shake hands, though, they use their left hand to support their right forearm as a sign of respect.

How to Say Hello in Arabic

Marhaba
Asalaam Alaikum (Peace be upon you.)
Ahlan (Informal).

Handshakes are expected between men. However, men and women don’t shake hands with each other in conservative Islamic cultures.

How to Say Hello in Polish

How to Say Hello in Irish

Need some help pronouncing it? Here’s a video:

How to say Hello in Welsh

How to Say Hello in Hindi

Shaking hands is common in India, but placing both hands together and giving a slight bow is more traditional. Depending on where they’re from and conservative or Westernized they are,  people may or may not shake hands with the opposite sex.  It’s best to wait and see if a handshake is offered.

How to Say Hello in Vietnamese

In Vietnam, handshakes are common. However, instead of shaking with the right hand, the Vietnamese shake with both hands and incorporate a slight bow. Older people and women may choose to bow instead of exchanging handshakes.

As you can see, there’s quite a bit of cultural variance even with something as simple and universal as a greeting. For businesses, this is something you need to keep in mind when translating content or marketing to other cultures.  To avoid missteps, choose a language services company that can make sure your message comes through appropriately for each language and culture you target.

World Hello Day was founded in 1973 as a response to the Yom Kippur War. The holiday sounds simple enough, but behind the simplicity is a deeper message about the importance of using communication rather than force to settle conflicts.  Of course, while we all wish that world peace was as easy as saying “Hello,” that’s obviously not the case. But at least it’s a start.

How do you say hello in your language? Let us know in the comments.

2 thoughts on “How to Say Hello in 15 Languages”