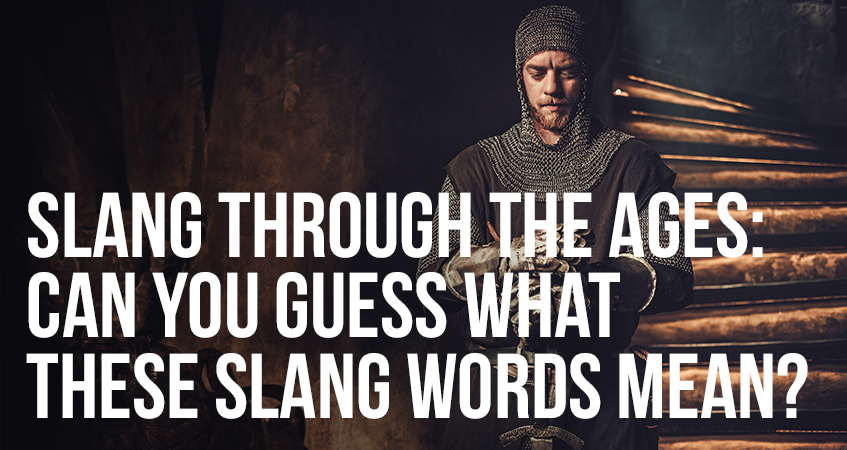 “All slang is metaphor, and all metaphor is poetry.” – Gilbert Chesterton

When it comes to English slang through the ages, how hip are you? Can you guess the meanings of these historic slang words from the past and present? Take this quiz and find out! Who knows? You might just “take the egg!”

Answers are below the fold.

Q) Which of these historic slang phrases refer to drinking?

A) All except to milk a pigeon.

Meanwhile, to milk the pigeon means “to endeavor at impossibilities.”

Q) Which of these slang words is a compliment?

A) Bricky is a Victorian-era word that means ” brave.” A church bell was an overly talkative woman in the Victorian era. Meanwhile, super-serviceable is an Elizabethan insult against someone’s social position. A jollocks is another Victorian insult: it means someone who is overweight.

Q) Who would you want to sit next to on the bus?

A gigglemug is a Victorian slang word for someone who is always smiling.  Might be annoying, but still much better company than a hornswoggler, who might try to cheat you. Not to mention a jackroller, who might wait until you pass out drunk,  then take your purse. Or a wurp, which is a term from the 1920s that equates to “wet blanket” or “Debbie Downer.”

Q) Which one of these words doesn’t belong here?

Which one of these words isn’t the same?

In this case, it would be “zonk on the head,” which is the only term on the list that doesn’t mean something good.  A zonk on the head is Beatnik slang for something bad. The bee’s knees is a phrase from the  1920s  that means “an outstandingly good person or thing.”  Bang up to the elephant  is Victorian slang for “perfect.” And of course, “bad” has meant “good” since 1897.

Q) Which of these beverages won’t get you drunk?

Scandal water may sound scandalous, but it’s actually just tea. So is chatter both. Cat-lap is a Victorian term that means coffee or tea, usually used when the speaker would rather be drinking something stronger.

On the other hand, giggle water is 1920s  American slang for booze. And swizzle is an 18th-century word for liquor.

Q) Which words are synonyms for “making the beast with two backs?”

A) Vulgarity and sex have always been fertile ground for new slang words. But to flay the fox actually means “to vomit.” Or at least it did in the 18th century. To twig is also from the 1700s and 1800s, and it means “to observe something.”

Meanwhile, mafficking is a Victorian term for “getting rowdy in the streets.” But not that kind of rowdy. . . get your mind out of the gutter!

To haul someone’s ashes is a delightful phrase from the early 1900s that could mean either beating someone up or getting frisky with them. Meanwhile, to take a turn among the cabbages is a 17th-century euphemism for more than just gardening.

Q) Fill in the blank: If you drink too much, the next day you’ll have:

A) In the 1900s,  katezenjammer  was a common way to say “hangover.” A ducky shincracker and dead hoofer are 1920s words for a good dancer and a bad dancer, respectively.

Q) Which of these are slang words for real occupations?

All of the above! A “fartcatcher” is a servant who walks directly behind their master or mistress, an unfortunate position to be in if beans were on the menu. A sawbones is a surgeon, and a rabbit catcher is a midwife. A “pearl diver” was beatnik slang for a dishwasher at a greasy spoon.

Obviously, slang words did not begin, or end, with “these kids today.” Slang has always been a way for members of different subgroups and subcultures to identify and connect with each other. People who weren’t part of the right crowd (or “in orbit,” in Prohibition-era parlance) would be confused.

So, criminals often used slang to their advantage. In fact, the first dictionaries in Europe focused on the “cant” or slang of beggars and criminals, with the aim of preventing innocent people from becoming victims.

Chaucer and Shakespeare both used slang to liven up their writing.  Even the title of The Canterbury Tales is slang. A “Canterbury tale” was a tall tale. Shakespeare relied heavily on slang and double meanings and even coined some new words of his own.

Meanwhile, the Oxford English Dictionary distinguished itself by including slang words and meanings along with “proper” ones. And they continue that tradition today, frequently adding new words often inspired by the Internet and social media.

Slang words are rich and infinitely variable . . . which can present a problem when it comes time to translate, especially for businesses who have to be image-conscious.  If your marketing uses slang, you have to find an equivalent term. Even your business isn’t using slang, you need to be aware enough to avoid unintentional double entendre.

That’s where a good translation agency comes in. At K International, our translators and multilingual copywriters have the in-depth local cultural knowledge to make sure your message gets through and unintended messages don’t.  If you’re in the market for language and translation services, come see what we have to offer!