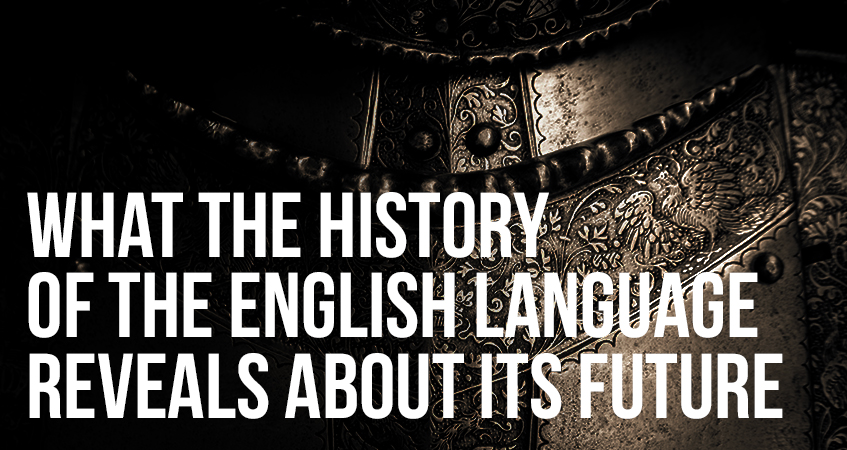 What will English sound like 50 years from now? Does the history of the English language contain clues about its future? Perhaps, and English purists are not happy about it.

A team of linguists from the University of York released a report last week that offers a glimpse into what some are calling a dystopian future: It’s the year 2066 and most of the UK’s regional dialects have disappeared. In London, spoken English has been heavily affected by foreign accents. For example, the “th” sound has been completely replaced by “f”, “d” or “v.” People say “fink” instead of “think” and “muvver” instead of “mother.”

Cue a rash of headlines and newspaper stories blaming foreigners for the imminent death of “the Queen’s English.” Like this one. And this one (“lazy” foreigners, no less!)

But wait … as it turns out, the term “The Queen’s English” (or “The King’s English,” depending on who’s on the throne) dates back to around the 16th century. Obviously, the English language has changed significantly since then. So who’s really speaking the “original” Queen’s English? At this point, not even the Queen herself.

Not only that, but the original “King’s English” was the result of just the type of shift that has “language purists” pulling their collective hair out (see “The Great Vowel Shift,” below.)

So, to the time machine! Let’s take a look at the history of the English language and a few of the many ways English has changed over time, along with what it might sound like in the future.

History of the English Language: The Great Vowel Shift

The Great Vowel Shift was a drastic change in how short vowels were pronounced that happened between 1360 and 1600.  This change forms one of the main distinctions between Middle English and Modern English, between the language of Chaucer and the language of Shakespeare.

According to The History of English, “while modern English speakers can read Chaucer’s Middle English (with some difficulty admittedly), Chaucer’s pronunciation would have been almost completely unintelligible to the modern ear.”

For example, Chaucer would have pronounced “life” as “leef” and “five” as “feef.” “Sheep” were “shape”, a house was a “hoos,” and your best mate was your best “maat.”

So, why the changes? Linguists aren’t quite sure, but according to The History of English, “an important factor may have been the very fact of the large intake of loanwords from the Romance languages of Europe during this time, which required a different kind of pronunciation.”

You mean to tell me “The Queen’s English” was formed by contact with foreigners?

History of the English Language: The Case of the Missing “K’s”

Ever wondered why there are so many words in English that begin with a silent k?  As it turns out, the “k” wasn’t always silent. Prior to the 17th century, people actually said “k-nife” and “k-night.” But then they stopped.  Nobody knows exactly when or why people started dropping the “k.” Probably, it started with young people –  the 17th-century version of “totes” or “obvi.” But since it’s easier to say “nife” than to say “k-nife,” the change stuck.

History of the English Language: ⟨x⟩ Marked the Spot

Speaking of English spelling peculiarities, perhaps you’ve seen a poem floating around that begins like this:

I take it you already know
Of tough and bough and cough and dough?
Others may stumble, but not you
On hiccough, thorough, slough, and through.

The many different ways to pronounce “ough” are the result of a missing consonant, ⟨x⟩ , that dates back to Old English. It sounded a lot like the Scottish loch or German nicht. During the Middle English period, it was spelled with a “gh.” But we don’t use it anymore.

In general, while English vocabulary has gotten more extensive over the years, pronunciation has evolved to become less complicated.  This latest report suggests that that trend will continue. Immigration is only one potential driver of this change. Siri and other voice recognition products are also changing the way we speak.

For example, most voice recognition technology doesn’t do a good job of parsing regional dialects. So, as the technology expands, there will be ever more pressure on people who speak to adopt a more “standardised” speech.

Plus, American TV and music have become ubiquitous, and Americanisms more difficult to avoid.

So, here’s a brief summary of what researchers expect English to sound like in 50 years, courtesy of the Telegraph:

TH’ stopping – the dental consonants ‘th’ will be replaced by ‘d’ meaning ‘this’ or ‘that’ will become ‘dis’ and ‘dat.’

‘TH’ fronting – Words which begin with a ‘th’ sound will be lost so ‘thin’ will become ‘fin’ and ‘think’ will change to ‘fink.’

Sound softening – hardly anyone says ‘syoot’ for ‘suit’ anymore and the trend will continue with the sharp corners knocked off words.

Yod dropping – words like ‘cute’ or ‘beauty’ will become ‘coot’ and ‘booty.’

Consonant smushing – ‘W’ and ‘r’ are already similar for many southern English speakers but the letters could completely collapse into one sound. Words with ‘ch’ and ‘j’ could also become indistinguishable.

Glottal stop – the slight linguistic trip which turns ‘butter’ into ‘bu’er’ in dialects like Cockney and Geordie will become more prevalent across the country.

They also expect even more abbreviated words like “totes” and “bruv” to become commonplace.

The Future of the English Language Isn’t Set in Stone

All of the trends listed above influenced the linguists’ conclusions. That said,  English speakers have been slowly making the language simpler and more efficient for centuries. Usually, this happens over the strident objections of language “authorities.” It’s silly and short-sighted to blame immigrants. Or young people, though I’m guilty of having a few “Hey, you kids, get off my lawn and use an entire 5 syllable word while you’re at it!” moments myself.

Also, this report is just an “educated guess’ of what the language will sound like.  Language sometimes evolves in surprising ways. For example, in the United States, linguists have been predicting the death of regional dialects for decades. And yet, surprisingly, new dialects are forming, grounded in regional pride and a sense of place.

The same could happen in the UK, or old dialects could remain intact if technology adapts to recognize them and people see them as something to be proud of.

What do you think English will sound like 50 years from now?