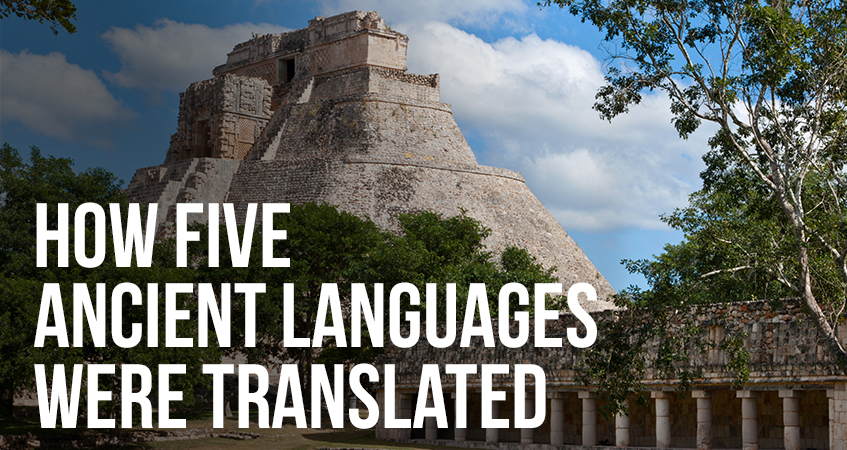 How do you translate a language when nobody is alive who speaks it? So much of what we know about ancient cultures comes from the writings they left behind. But how are ancient languages translated? Here’s how archaeologists and linguists deciphered five ancient languages.

For more than a thousand years,  historians puzzled over the hieroglyphs of ancient Egypt. What did they mean? Nobody knew, but plenty of people were willing to guess. They were mostly wrong. For example, the Hieroglyphica of Horapollo provided incorrect explanations for 200 glyphs. For 2o0 years after it was published, scholars took it as truth. They also believed its main premise, that the hieroglyphs were a purely symbolic language.  We now know that each symbol can represent a sound, a concept or an idea, depending on the context.

Then, in 1799, one of Napoleon’s soldiers found a stone with inscriptions on it while repairing Fort Julien near Rosetta in Egypt. The stone, used as fill when the fort was being built, contained the same inscription in three different languages: Ancient Egyptian hieroglyphs, demotic Egyptian and ancient Greek.

The Rosetta stone became world-famous as the key that unlocked the secrets of ancient Egypt. Even with the clues provided by the inscriptions, it took 20 more years to decode the hieroglyphs. Jean-François Champollion, a French Egyptologist, built upon the earlier work of English scientist Thomas Young to put together the first Ancient Egyptian grammar and dictionary. Unfortunately, Champollion’s last trip to Egypt exhausted him so much he died of a stroke shortly after his return to France. His Grammaire égyptienne was published after his death in 1838.

Cuneiform script originated during the fourth millennium B.C.E in ancient Sumer. It is one of the oldest writing systems that we know of.  There are between half a million and two million cuneiform tablets in existence today. Most of them lay in storage, unread. There are simply not enough people who can read them.

The script was used to write several different related ancient languages, finally falling out of favour at the beginning of the common era. The first type of cuneiform to be deciphered was old Persian.  A French scholar, Eugène Burnouf, and friend Christian Lassen, both claim to have deciphered the Old Persian letters, assisted by a list of ancient Persian satatrapies (provinces) on a cuneiform inscription from Persopolis. Regardless of who got there first, they both made significant contributions to understanding the script.

An East India company officer named Henry Rawlinson completed the puzzle when he found the Behistun inscriptions in 1835.  The Behistun inscriptions are basically the cuneiform version of the Rosetta Stone. Created by the Persian king Darius the Great, they contain the same text written in three different languages: Old Persian, Elamite and Babylonian.

So, once Persian cuneiform was deciphered,  it was much easier to decipher the Babylonian script. By 1857 the code was cracked, as the four men who were able to read the script (Rawlinson, Edward Hincks, Julius Oppert and William Henry Fox) met in London for a translation showdown. The result? 4 closely matching translations and an ancient language rediscovered.

Moving on the Americas, the Maya used a complex series of glyphs to document their kingdoms, rituals and daily lives. However, only in the last few decades have we been able to understand what they wrote. Prior to the 1980s,  historians tended to see the Maya as peaceful astronomers, in contrast to the violence and conquest they saw in the other great civilizations of Meso- and South America. That’s because all we could read for centuries were their astronomy texts and calendar.

Scholars originally thought that each Mayan glyph represented an idea, and that the script had nothing to do with phonics at all. Actually, much like Japanese and ancient Egyptian, the symbols can represent either a word or a syllable sound, depending on context.  This view was originally championed by Soviet linguist Yuriy Valentinovich Knorozov in the 1950’s.  However, as silly as it might sound to us today, the Cold War led most Western scholars to discount Knorozov’s analysis, which his own government was trying to claim as “Marxist-Leninist.”

Prominent Mayan scholar J.  Eric. S. Thompson also doggedly believed that the symbols in the script had to be ideograms.  So, Knorozov’s work didn’t get any traction until the 1960’s, when scholars began to accept that there was a phonetic component to the writing. From the 1960’s to the 80’s, the script was deciphered as people from all different fields collaborated to the crack the code. Now, we can read about 90% of the ancient Maya texts.  Unsurprisingly, our idealized image of them has been shattered. We know who they were, and they were like us. As Wikipedia put it:

“Not only could a real history of ancient America now be read and understood, but the light it shed on the material remains of the Maya showed them to be real, recognisable individuals. They stood revealed as a people with a history like that of all other human societies: full of wars, dynastic struggles, shifting political alliances, complex religious and artistic systems, expressions of personal property and ownership and the like. Moreover, the new interpretation, as the exhibition demonstrated, made sense out of many works of art whose meaning had been unclear and showed how the material culture of the Maya represented a fully integrated cultural system and world view.”

Deciphering ancient languages has long been the province of specialized “language detectives.”  Like Sherlock Holmes, decipherers would study a text for years, even for a whole lifetime, looking for the tiny details that would make everything fall into place.

But times do change. In 2010, Ugaritic became the first language to have been decoded mainly by a computer program. In only a few hours, a program written by three computer scientists decoded the ancient language of Ugaritic from scratch. The same task took human decipherers years, though it remains to be seen whether or not the computer program will work in the real world.

Want to try your hand at deciphering?  Thanks to Professor Jacob Dahl of Oxford, you can help decipher Proto-Elamite, the earliest known writing system in what is now Iran.  Professor Dahl is making high-resolution images of Elamite tablets in the Louvre freely available online, in hopes of crowdsourcing the answer to this vexing puzzle.

What’s your favourite ancient script? Let us know in the comments!

6 thoughts on “How Five Ancient Languages Were Translated”