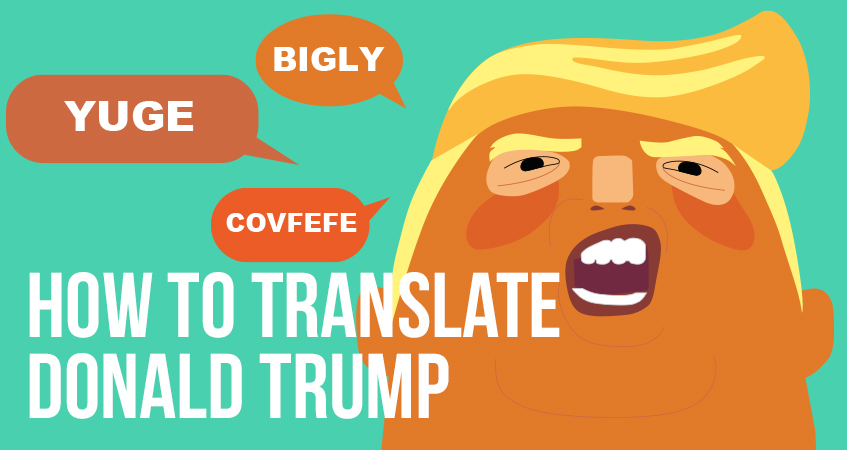 How do you translate a word salad? That’s one question the rise of Donald Trump has interpreters and translators around the world asking themselves. The National Post called the reality TV personality, businessman and US presidential candidate [actual real-life President of the United States now, no really!] “a linguist’s dream” for his “unusual” speech patterns.  I suppose that’s one way to put it.

In this case, a linguist’s dream is an interpreter’s nightmare.  Trump is known for long, rambling, stream-of-consciousness rants that don’t always make sense in English. He’s also prone to (perhaps accidentally) reviving obscure, old words like “braggadocious” and “bigly.”

But, there’s a possibility Trump could become the next president of the United States. So, his speeches are international news. And that means foreign interpreters and translators get to parse sentences like this beauty, from a speech he gave in South Carolina:

Look, having nuclear—my uncle was a great professor and scientist and engineer, Dr. John Trump at MIT; good genes, very good genes, OK, very smart, the Wharton School of Finance, very good, very smart—you know, if you’re a conservative Republican, if I were a liberal, if, like, OK, if I ran as a liberal Democrat, they would say I’m one of the smartest people anywhere in the world—it’s true!—but when you’re a conservative Republican they try—oh, do they do a number—that’s why I always start off: Went to Wharton, was a good student, went there, went there, did this, built a fortune—you know I have to give my like credentials all the time, because we’re a little disadvantaged—but you look at the nuclear deal, the thing that really bothers me—it would have been so easy, and it’s not as important as these lives are (nuclear is powerful; my uncle explained that to me many, many years ago, the power and that was 35 years ago; he would explain the power of what’s going to happen and he was right—who would have thought?), but when you look at what’s going on with the four prisoners—now it used to be three, now it’s four—but when it was three and even now, I would have said it’s all in the messenger; fellas, and it is fellas because, you know, they don’t, they haven’t figured that the women are smarter right now than the men, so, you know, it’s gonna take them about another 150 years—but the Persians are great negotiators, the Iranians are great negotiators, so, and they, they just killed, they just killed us.

Holy Great Wall of text, Batman! That’s all one ‘sentence,’ and it doesn’t make much sense even in English. Slate is asking readers for help diagramming it.  I think it’s a lost cause. Apparently, Wharton School of Finance doesn’t spend a lot of time on the niceties of English grammar.

So, how do you translate Donald Trump?

According to  Jose Diaz-Balart of Noticiero Telemundo, you just take it one word at a time and let the chips fall where they may. He told Time Magazine:

“I don’t think you actually prepare for Donald Trump. There are people who speak very quickly and not in complete sentences at all times. … What I can’t promise is how your voice will sound in Spanish. I can promise your voice will be exact. The focus is not so much on the aesthetic but on being right.”

But Trump makes even quick and dirty word-for-word interpreting difficult. For example, in the last debate. he pulled out some unusual words like “bigly” and “braggadocious.”  Spanish translators “just skipped right over them,” according to the Quartz.

For example, compare this sentence from Donald Trump (referring to Khizr Khan’s wife Ghazala) with two Japanese translations (via Quartz.)

English: “I saw him. He was—you know, very emotional and probably looked like—a nice guy to me. His wife—if you look at his wife, she was standing there, she had nothing to say, she probably, maybe she wasn’t allowed to have anything to say, you tell me, but plenty of people have written that.”

NHK: ”おそらく彼女は発言することを許されなかったのだろう” or “She likely wasn’t allowed to give a statement.”

CNN Japan:  “発言を許されていなかったのかもしれない,” or “It could be she wasn’t allowed to speak.”

Even transcribing his speeches in English is difficult. Professional transcriptionists can’t decide how to punctuate his speaking style. They’ve become so reliant on the em-dash that they call Trump “the em-dash candidate.”

Translators also have issues with Trump’s “locker room talk.” Sometimes, they must soften his “braggadocious” descriptions of sexual assault to appease their censors.

For example, here are some Chinese and Japanese translations (via Language Log):

If you’re a star, they let you do anything. Including grabbing their genitals.

Spanish translators, too, had to soften his language, according to Quartz:

Del Álamo said her colleague used “coger sus genitales,” or “grab them by the genitals”and “tocar a las mujeres sin su permiso,” or “touch women without their consent.”

Trump’s attempts at reaching out to other language communities also get lost in translation. For example, his campaign tried to appeal to Hispanic voters with signs that said “Hispanics para Trump.”

“Para” is often translated as “for.” But in this context, “por” would be the correct word to use.  And “Hispanics” should have been “Hispanos.”

So, literally the only word on that sign that’s correct is “Trump.” In a deliciously ironic twist, “para” can also mean “stop.”

Also, Donald Trump is a “big fan of Hindu.” Want proof? Check out this painful campaign ad in Hindi:

Get used to it, folks. Whatever happens on Election Day, Donald Trump seems unlikely to fade into the woodwork. Even assuming he loses, he’ll still be providing an All-You-Can-Eat buffet of word salad for some time to come.

Tags: Interpreting Translation
Previous Post Clowns in Translation: Our Love/Hate Relationship With Clowns Around the World
Next Post 13 Fiendishly Bad Translations for Halloween