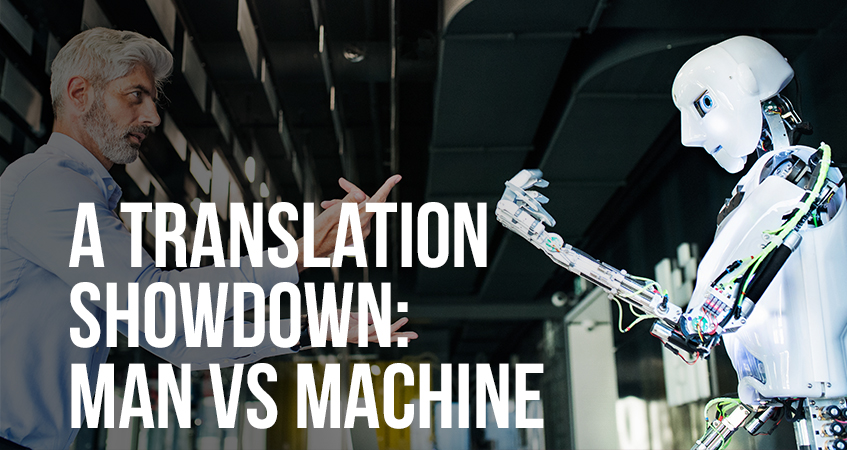 Some scientists working on machine translation claim that with recent improvements, algorithms are almost as good at translation as humans.  And when the subject of “jobs that will soon be taken over by robots” comes up, futurists almost always put “translation” in the crosshairs.

Man versus machine, the translation industry’s version of the famous contest between John Henry and the steam-powered hammer.   Guess who won?

The Rules of the Game

Both the translators and the machines had four texts to translate:

Kwak Joong-chol, from the Hankuk University of Foreign Studies, was responsible for selecting the texts. As he explained to Chosun.com,

“We chose pieces of writing that had never been translated before and focused on assessing how smoothly the programs were able to comprehend the feel and metaphoric meaning of sentences.”

A team of 3 professional translators scored the resulting translations based on the following characteristics:

Each translation could score up to 5 points per category, for a total of 15 possible points. Then, scores for all of the translations were added together or a total high score of 60 points.

The humans, of course. Was there ever any doubt?

Granted, the machines were much faster. They delivered their translations in just a few minutes, while the human translators took almost an hour.

But when the translations were scored, the differences were striking. Out of the three translation programs being tested, Google Translate scored the best. But Google’s translations still only scored a 28 out of 60 possible points. Meanwhile, Papago scored a 17 and Systran walked away with 15.

An anonymous industry official told Yonhap News that Systran’s low score was probably because the program was written specifically for business translation.

The humans, on the other hand, scored much better, with a high score of 49 out of 60.

The Future of Machine Translation

The bottom line? Machine translation has a long way to go before it can replace a human translator.  At least for the time being, the future is about humans and machines working together. As Saltlux VP Shin Seok-hwan told the Korea Times:

“Though research shows machine translators can perform about 85 to 90 percent of human experts, they still make absurd mistakes. Today’s event is more about how much humans can benefit from using these machines and boost work efficiency of professional translators.”

So, how can translators and interpreters prepare for this  AI-assisted future?  Kirk Sung-hee, an English language and literature professor at Sookmyung Women’s University, has a few suggestions. She  told the Korea Times that

“It is likely that the human translators and interpreters will become editors who supervise and post edited translations that AI programs created . . . Against this backdrop, translator Kim Su-yeon called for new education programs for those who seek to work in translation and interpretation, such as taking a proofreading course.

“It will be helpful for students to practice proofreading,” she said.

And even as machine translation improves, some text may always require a human touch. For example, after the contest was over, translator Kim Su-yeon told the Korea Times,

“Despite the rapid improvement of AI-based automatic translating technologies, I expect literary translation will be the last human territory to be dominated by AI. I believe readers will still want humane expressions and creativity rather than machine translations.”

In the future, computers will surely get better at reliably translating simple, informative texts than they are now.

The key word here is reliably. Sure, right now they are often useful for getting the gist of a text. But recall that 90% of the machine translations in the contest came back “grammatically awkward.” Those are not good odds, and incorrect grammar or not-quite-right word choices can obscure meaning. That’s why the answer to the ever-popular question Can’t I Just Use Google Translate? is still “not if you value your business.”   When it comes to human translation vs machine translation, there’s still no contest.

But will they ever be able to understand tone and emotion, and convey it appropriately? Will they be able to make us feel? That’s certainly not on the horizon anytime soon. And that capability is an important part of translating everything from marketing copy to literature, and so much more.

Want to learn more about human translation vs machine translation? Check out what happens when Google Translate goes rogue.

Machine translation, sometimes referred to as MT, is the part of computational linguistics that uses software to translate text or speech from one language to another. Its in a constant state of change and can be confusing, full of jargon and people trying to sell you their solution. To help we’ve put together this guide.

How to Use Machine Translation

2 thoughts on “Man vs Machine Translation”