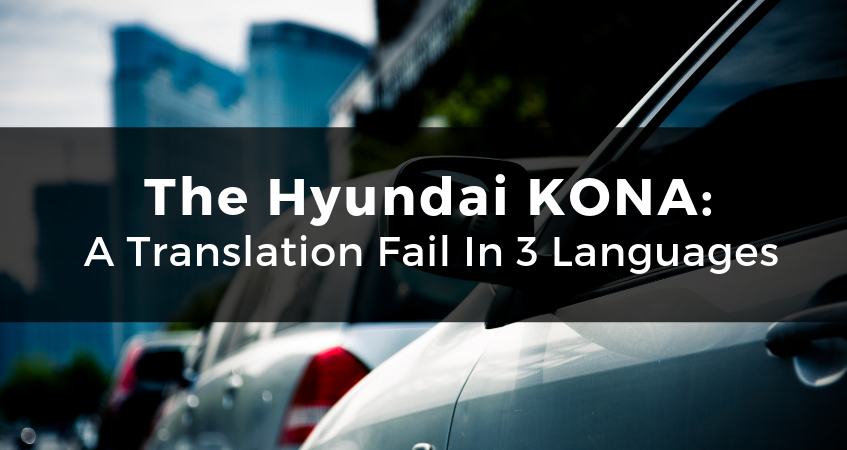 Naming a product for an international audience is harder than it looks. Exhibit A: the Hyundai KONA. The “subcompact crossover,” released last year in the UK,  introduces a distinctive “rugged” and “funky” design. Unfortunately, however, the name “KONA” has unfortunate sound-alikes and double meanings that make it a translation fail in more than one European language.

Why did Hyundai choose the name “KONA,” anyway? Named after the Kona district in Hawaii, it’s meant to appeal to adventurous, highly-caffeinated female consumers looking for small SUVs. As a company spokesman explained in the Korea Herald,

“Images that come to mind when thinking of Kona are dynamic marine leisure sports and the mild aroma of Kona coffee, which also represents the customer base of small SUVs.”

Alas for Hyundai, those pleasant associations are not quite universal.

KONA in Polish: “Dying in Pain”

In Polish, the word “konać” means “to be dying.” Guess what the third person singular of “konać” is? That’s right, it’s “kona.” So, in Polish, “Hyundai KONA” can be read as “Hyundai is dying,” or even “Hyundai is dying in pain.”

Polish speakers represent a sizeable market, both within the UK and within the EU as a whole. There are over 55 million Polish speakers around the world, and it’s the sixth biggest language in the EU by number of native speakers. In the UK, 546,000 speak Polish, making it our most common immigrant language.  “Hyundai is dying” is not exactly the message you want people to have, even in the back of their minds, when they’re car shopping.

In Portuguese, the situation is even worse. As Carscoops points out, in Portuguese, the soundalike word “cona” is a rather crude term for a part of the female anatomy.  And in fact, this isn’t even the first time an auto manufacturer has had this issue – Opel had to rename their “Ascona” in the Portuguese market for the same reason.

Fortunately, Hyundai has announced that the KONA will be marketed as the Hyundai Kauai in Portugal.

However, rebranding in Portugal may not be enough. “Cona” means the same thing in Galician as it does in Portuguese, so you can add  Spain’s 2.4 million Galician speakers to the list of people who are likely to be some combination of amused, horrified, and offended.

KONA in Norwegian: The Old Ball and Chain?

In Norwegian, “kona” means “the wife.” Of course, that’s not as bad as Portuguese or Polish.  But remember, the KONA name was originally chosen to appeal to young, adventurous female consumers.  So, even if the Norwegian meaning isn’t necessarily offensive, it does change the brand identity quite a bit from what was originally intended.

The KONA joins a surprisingly long list of other car names that got lost in translation. For example, there’s the Mitsubishi Pajero. Mitsubishi rebranded it to”Montero” in most Spanish-speaking countries, because who wants to drive around in a car that says “Wanker” on the back?

Then there was the Honda Fit. You won’t any Honda Fits on UK streets, but you’ll see the Honda Jazz around. That’s because Honda renamed the Fit everywhere except for the US and Japan. It was originally going to be called the Honda “Fitta” in Europe. Unfortunately, “fitta” is the Norwegian equivalent of “cona.” The marketing team caught on at the last minute and changed it, but not before creating an entire advertising campaign around the unfortunate tagline “Small on the outside, big on the inside.” On that note, let’s move along then, shall we?

Don’t forget the Buick  LaCrosse.  Lacrosse” is French Canadian slang for -ahem-“self-love.” So, Buick initially called it the Allure in Canada.

Mazda is not immune, either. The Mazda Laputa needed a new name in Spanish-speaking countries.  If you took Spanish as a teenager, you already know why. For those of you who didn’t- “la puta” means “the prostitute.” Not a good choice for a minivan, in particular.

How to Keep Your Product Name From Becoming a Translation Fail

How and when should you translate brand and product names? Well, it’s complicated.  You have to balance increased marketing costs with the potential of offending and alienating your customer base. And of course, when you’re translating from a language that uses the Latin script to a language like Chinese, things get even more complicated.

But one thing is for certain-getting expert help prior to entering a new market protects your brand from the embarrassment of negative press coverage and consumer mockery. A team skilled in marketing translation and transcreation can also ensure that your messaging stays on target in all the languages you do business in.

Want your marketing to stay “on message” no matter where in the world you do business?  Our team of linguists, designers and multilingual copywriters is here to help! For a free quote on your next marketing translation or transcreation project, contact us today!

11 thoughts on “The Hyundai KONA: A Translation Fail In 3 Languages ”