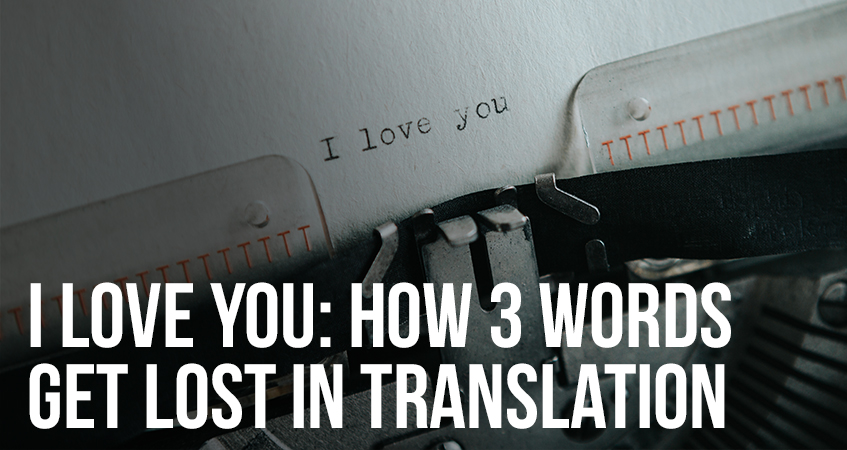 Sunday was Valentine’s Day.  Chocolate is now available at 75% off. Giant teddy bears slump, forlorn, in drugstore clearance bins. Three little words are everywhere: “I love you.” They are written in gold on red heart-shaped candy boxes, across cards, and on dozens of those little conversation heart candies that nobody actually eats.

Those three little words seem like they should be easy enough to translate. And on the surface, they are. For example, this blog post will tell you how to say “I love you” in 25 languages.

As Uri Friedman points out the The Atlantic:

“Many people in this world would find my behavior rather strange. That’s because Americans are exceptionally promiscuous when it comes to professing their love. In the United States, “I love you” is at once exalted and devalued. It can mean everything … or nothing at all. This is not universally the case.”

Some cultures declare love with abandon, throwing the words around like confetti. In other cultures, they are reserved almost exclusively for spouses, and even then rarely spoken.  In a 2005 study from City University of New York, some respondents were almost horrified by the ease with which Americans use the phrase. For example, Jung, a Korean woman, said

‘‘I don’t know why, but in my culture, to tell a person ‘I love you,’ so hard to come out from a mouth. We feel in heart but to say it is a very hard thing to do.”

Meanwhile, in China, wo ai ni, the Chinese translation of “I love you,” is a relatively new invention. Even three or four decades ago, no matter deeply and faithfully your spouse loved you, the best you could hope for was “‘wo xihuan ni,” which translates to “I like you.” As Dr. Kaiping Peng, a psychology professor at Berkeley, told ChinaFile.com:

“‘Wo ai ni,’ or the Chinese equivalent of ‘I love you,’ is a thing of the last thirty years,” he told me. “Before then, you just showed love through holding hands, kissing, or maybe writing or doing something nice—but you never said it.”

In cultures where people rarely say “I love you,” the emphasis tends to be on nonverbal expressions of love. You might only say the words once in a blue moon, but ideally you’d show your loved ones that you care for them every single day.

In China, as well as in many other cultures where verbal displays of emotion are traditionally uncommon, the culture is beginning to shift. Younger people, with more exposure to Western media, are more likely to say “I love you” than their parents and grandparents. However, it’s not uncommon for people from these cultures to actually prefer to say “I love you” in English as opposed to their own native languages.  For example, the CUNY study quoted Sue, a Hungarian woman from Romania with an American partner who tells her he loves her frequently and expects her to reciprocate. She told researchers that she tells her partner “I love you” in English because

“English is not my first, second or third language, saying ‘‘I love you’’ means nothing to me. I wouldn’t dare say it in Hungarian to anyone.”

Her experience is echoed on ChinaFile.com by a Chinese investment banker named Guang Lu:

For us, ‘I love you,’ is beautiful in its brevity, universality, and vagueness in another language,” he tells me, “but ‘wo ai ni,’ is still very unchartered territory.”

All of this has some significant implications for businesses, and not just around Valentine’s Day. Love is universal. Marketing campaigns built around the idea of love are not, as McDonald’s found out with its “I’m loving it” campaign. According to the Atlantic:

In 2003, McDonald’s launched its “I’m lovin’ it” marketing campaign in Germany, translating its slogan literally as Ich liebe es​. Guardians of the German language were not pleased. “An American is relatively quick in expressing love for profane things and therefore is able to give his/her heart to fast food. The German translation ‘Ich liebe es,’ however, is just too strong to be squeezed into a styrofoam box together with a fatty burger,” one journalist argued.

Oddly enough, McDonald’s used a German ad agency to come up with the campaign. So, it’s not just a case of an American fast-food giant botching an international marketing campaign by exporting it from the US without thinking about how well it would translate. I think the “I’m loving it” slogan was just too easy to mock, and McDonald’s was too tempting a target. Still, it does show the importance of working with a translation company who is familiar with both your target language and the cultural nuances that could affect your business communications.

How often do you say “I love you?” If English isn’t your first language, do you prefer to say it in English or in your native tongue? Let us know in the comments!