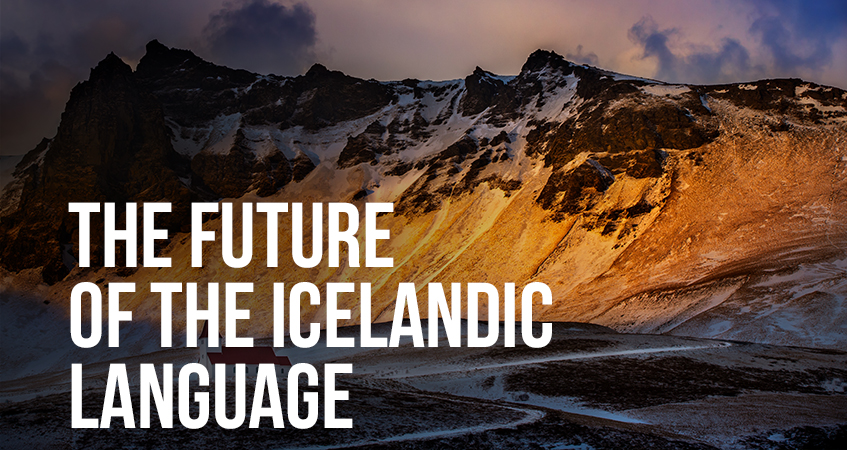 The Icelandic language is as close as you can get today to the language of the Vikings. Brought to the Iceland by Norse settlers in the 9th century, it is the closest living language to Old Norse.  But is the modern digital age threatening to wipe out Icelandic?

It depends on who you ask.

If the latest headlines are to believed, Icelandic is on its last legs. Here’s a sampling:

Icelandic Language At Risk Of Extinction As Robots And Computers Struggle To Understand It – IFLScience.com
Computers don’t even understand it: Icelandic people worrying their language is facing extinction- Associated Press
Low Wages And Digital Death: Icelandic In Crisis

Is the future really all that bleak? Let’s find out.

Is the Icelandic Language in Danger?

At this point, Icelandic is not endangered.  It’s not even classified as vulnerable or threatened. It’s the official language of Iceland. It has 331,000 native speakers. That may not seem like a lot compared to English. But it’s well over the “magic number” of 35,000 that economist David Clingingsmith recently identified as the number of speakers need to keep a language safe (assuming he’s correct).

And most importantly, Icelanders are still teaching the language to their children.

So why all the alarmist headlines?

Icelandic and the Rise of the Machines (That Speak English)

Over the past decade, Icelanders have become increasingly concerned about the cultural presence of the English language.  Knowledge of English is widespread in Iceland.  Because English is so prevalent on the Internet, Icelandic people (especially Millenials) have more reason to use it than ever before.

Then, there’s the rise of the machines: Siri, Google  Now, Alexa, GPS systems . . . it’s now possible to speak to so many of your gadgets and have them talk back . . . in English.

And therein lies the problem. As of right now, you can’t switch your iPhone to Icelandic. You can’t use it to talk to Siri or to ask Alexa. According to Mashable, GPS programs frequently butcher Icelandic road names and place names.In fact, according to a recent report from the Multilingual Europe Technology Alliance (META-NET), Icelandic is one of the European languages that’s least-supported by new technologies.

What does that mean? It’s just one more incentive for Icelanders to speak English instead of Icelandic in the daily lives. And as  Eirikur Rognvaldsson, a language professor at the University of Iceland, told the AP, “The less useful Icelandic becomes in people’s daily life, the closer we as a nation get to the threshold of giving up its use.”

Can the Icelandic Language Be Saved?

Is the future of the Icelandic language really that bleak? Not necessarily.  Again, there are still plenty of people speaking it in their daily lives and teaching it to their children. And it’s certainly possible for a society to make foreign language learning a priority without giving up its native tongue.

“These two things can exist side by side. We have rappers, and stand-up comics, musicians writing their material in Icelandic. And that’s before we talk about television and movies in Icelandic, and there have never been as many books published in Icelandic as there are now.”

That’s not to say that there isn’t room for improvement.  For example, Eiríkur Rögnvaldsson told the Grapevine that the country needs to do a better job teaching immigrants to speak the language,  saying “We import people to come work in Iceland, and they don’t have the time to learn Icelandic [on top of working full time].”

And the META-NET report calls for additional public funding to develop more digital support for the language, noting that 330,000 speakers aren’t enough to provide an incentive based on profit alone.

And of course, the best time to try to protect a language is before it’s gotten to the “endangered” stage.

But keeping those cautions in mind, reports of Icelandic’s imminent demise seem to be exaggerated. Even the META-NET report ends on an optimistic note. They note that the proper support can turn AI and speech recognition technologies from friend to foe:

Want to learn more about the history of the Nordic languages? Read this article.

And if you need translation, whether for Icelandic or for another language, check out our full range of language services here!

Tags: Technology
Previous Post Cultures Where Men and Women Don't Speak the Same Language
Next Post How to Celebrate May Day Around the World

0 thoughts on “The Future of the Icelandic Language ”