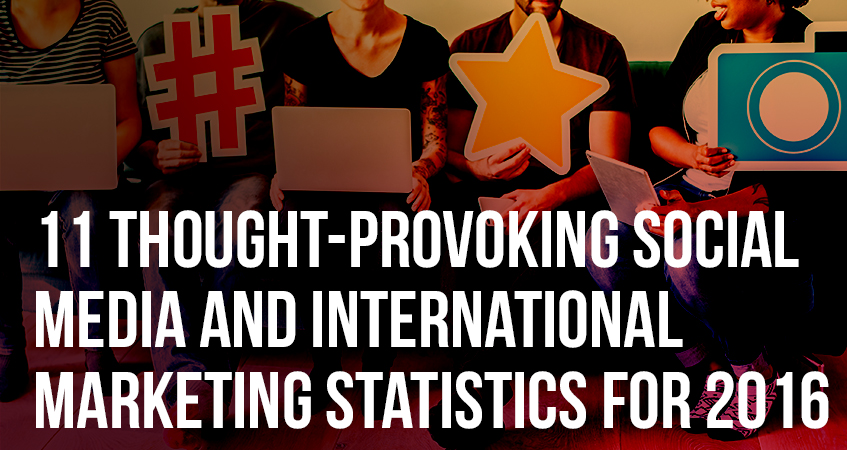 For businesses, social media is an opportunity to connect with existing and potential customers around the world. But do you know enough to use it effectively? If you think a “one country fits all” social strategy is enough, think again. Here are 11 statistics about social media around the world to fuel your international marketing campaigns:

International Marketing Takeaways: Planning to market your business in Asia? The internet is your friend. Localised social media should be part of your marketing strategy. That means targeting content to local languages and preferences. It may also mean developing a presence on local social networks.  These networks can rival or exceed Western giants like Facebook in some markets.

Mobile is taking over the world.

Not everyone can afford a desktop computer. Mobile phones, on the other hand, are a more accessible gateway to the internet.

International Marketing Takeaways: Consider the consider technological limitations your customers might face in different parts of the world. Make sure your social media content looks good on screens of all sizes.

Social Media for international marketing is about more than just Facebook.

In fact, your average Western internet user hasn’t even heard of some of the world’s top social networks.

International Marketing Takeaways: For international marketing, social media is about more than just Facebook, Twitter and Instagram. Often, local social networking sites are just as important, if not more so. Don’t make the mistake of ignoring them. Want an example of a company using a local social networking site effectively? Check out this case study of how Marriott uses WeChat to connect with customers and recruit employees in China.

What country has the highest social media penetration? No, it’s not the United States.

The country with the highest social media penetration is…Taiwan.

International Marketing Takeaways: It’s true that Facebook and Twitter were invented in the United States. However, that doesn’t make the US, the UK and other English-speaking countries any more “social” than other parts of the world.

International Marketing Takeaways: Obviously, the demand for translated content on social media is increasing. That said, businesses should be cautious about relying Facebook’s automatic translations. As with all machine translations, they are not 100% accurate. Also, they don’t take into account any of the many cultural nuances that can make the same content succeed in one place and fail in another.

English is number one on Facebook, but for how long?

English may be the number one language on Facebook, but Portuguese is the fastest-growing.

International Marketing Takeaway: Looking at the languages in use on a particular network now will only tell you half the story. To maximise your advantage, you also need to know what languages are growing.

Tweeting only in English? You’re only reaching half the network.

Something to keep in mind: Twitter users are more likely to retweet and mention tweets in their preferred languages.

International Marketing Takeaways: Twitter is an effective tool to reach customers worldwide. However, there’s one caveat. If you are marketing on Twitter, you will have a hard time reaching your customers if you don’t speak their language.

As you can see, social media is an increasingly important part of international marketing. But there’s no “one size fits all” social strategy that will work everywhere. Seek assistance from someone familiar with both the languages and culture of the countries you plan to market to. At K International, our experts use their knowledge and skills to help you create localised content marketing and social media campaigns that connect with your customers no matter where they are.

Tags: International Business international marketing Social media
Previous Post 10 Funny Euro-English Words We Might Hear More Often If The UK Leaves the EU
Next Post 9 Quirky Summer Festivals From Around The World In 2016