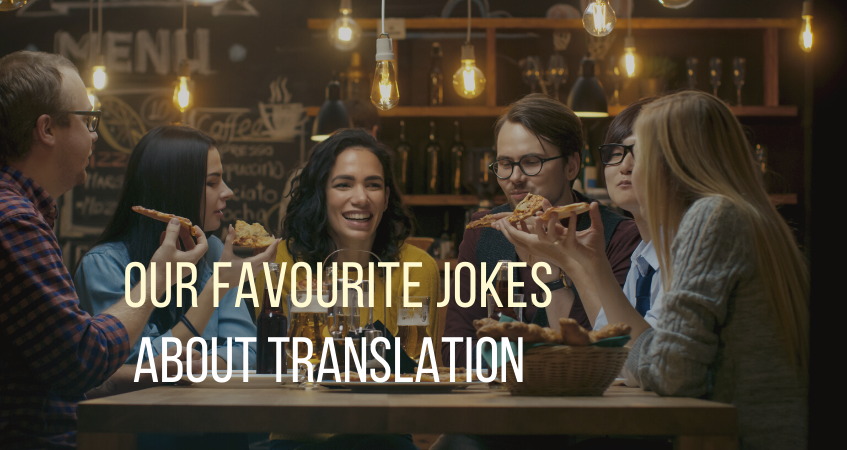 Its our Christmas party tonight… we’re all of to the pub for a meal then its a night at the comedy club. To prove translators and designers can be funny here’s our favourite jokes.

How many translators does it take to change a lightbulb? It depends on the context.

Two translators on a ship are talking. “Can you swim?” asks one. “No” says the other, “but I can shout for help in nine languages.”

How does a freelancer define “weekend”? Two working days till Monday.

A mouse is in his mouse hole and he wants to go out to get something to eat, but he’s afraid there might be a big cat outside, so he puts his ear by the opening and all he hears is “Bow Wow” so he thinks, “Well, there can’t be a cat out there because there’s a big old dog”, so he goes out of his mouse hole and is promptly caught and eaten by a cat, who licks his lips and says “It’s good to be bilingual!”

The linguist’s husband walked in and caught his wife sleeping with a young co-worker. He said, “Why, Susan, I’m surprised.”
She bolted upright, pointed her finger and corrected him, “No. I am surprised. You are astonished.”

A cat is sitting on the throne, and two dogs, an envoy and his interpreter, are standing before him. The interpreter dog is whispering to the envoy dog, “You’ll have to rephrase that. Their language doesn’t have a word for ‘fetch'”.

The interpreter at a conference: “Our Japanese guest just told a joke which is absolutely untranslatable, but I think it will please him if you laugh”.

Wingdings and Comic Sans walk into a bar and the barman says ‘we don’t serve your type in here’.

What type of diabetes is a graphic designer most likely to get diagnosed with? Type 1

Why did the graphic designer go see the psychic? He wanted to see what was in his Futura.

What did the typographer say to the printer who wouldn’t stop talking? “Get to the point.”

Which dessert is a printer’s favourite? Keyline pie

What is the type designer’s favorate breakfast? Kern flakes!

How many typesetters does it take to change a light bulb? One, but be sure to specify how tight you want it.