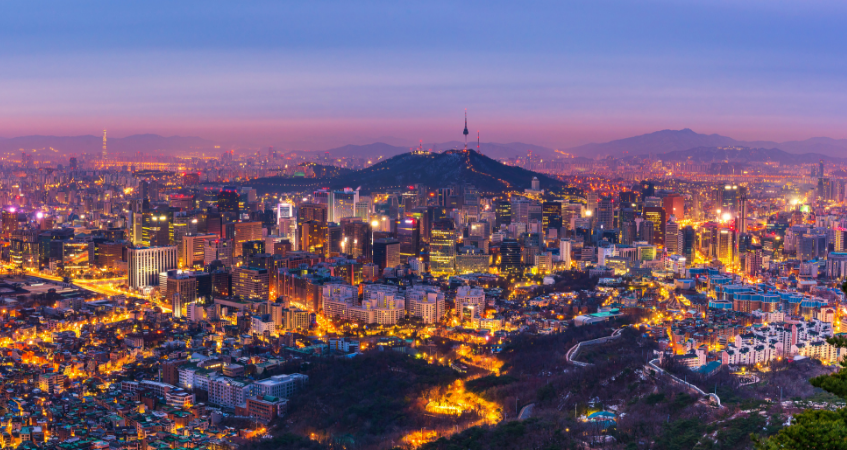 The Winter Olympics wrap up this weekend. South Korea has been in the spotlight for the past month. With that in mind, we thought it would be fitting to mark the occasion by putting the spotlight on the Korean language. Here are 6 fascinating facts about Korean, its alphabet, and its history.

Korean is the national language in South Korea, North Korea and two jurisdictions in China.

Speaking of South Korea, did you know that the South Korean economy is the 11th largest in the world by GDP? Despite tensions with North Korea, South Korea grew at its fastest rate  in seven years in the third quarter of 2017.  According to Bloomberg, it’s set expand by about 3% in 2018.

And although Korean isn’t one of the top immigrant languages in the United Kingdom, there are thriving Korean communities in London and New Malden.

Korean is a language isolate . . . almost.

If you thought Korean shared a language family with other Asian languages like Japanese or Mandarin, you would be wrong.

That said, it might have one living relative: the Jeju language, spoken in South Korea’s Jeju province.  Jeju is sometimes considered a dialect. However, it is quite distinct and not mutually intelligible with the Korean of the mainland.

That makes it the 17th most spoken language in the world.

Korean has its own script,  called Hangul.

King Sejong the Great invented Hangul in the 15th century. Before then, Koreans wrote with Chinese characters, called Hanja. But these were difficult to learn without spending years in school, and that put literacy out of reach for most commoners.

So, the king created the Hangul script to encourage literacy amongst his subjects.  Hangul was designed specifically for Korean, and it was also created to be easy to learn and use. Hangul is an alphabet, with each symbol corresponding to a sound. The are 14 consonants and 10 vowels. Letters are grouped together into syllable blocks.

Want to learn to read Hangul in 15 minutes? This clever comic shows you how easy it is.

Hangul may be one of the youngest alphabets in the world, but it’s also the most well-designed. To quote Wikipedia, “[n]umerous linguists have praised Hangul for its featural design, describing it as “remarkable”, “the most perfect phonetic system devised”, and “brilliant, so deliberately does it fit the language like a glove.”

Another cool fact: In Hangul, the shape of the letters mimics what your tongue is doing when you pronounce them.

Koreans love their alphabet so much, both North and South Korea honor it with a national holiday (October 9th in the South and January 15th in the North).

Because the Korean alphabet is so different from the Latin alphabet, documents may need to be reformatted when they are translated from one language to another. Text often contracts horizontally when translated from English to Korean, but requires more space vertically.

For more on the intricacies of multingual typesetting, see 5 Reasons Multilingual Typesetting is Harder Than You Think.

In Korean culture, formality, politeness and status is still a big deal. So, special nouns and verb endings show respect to both the person you’re talking to and the person your talking about.

This is one of the reasons businesses need a skilled translator for Korean translation. If you want to have the desired impact on your audience,  it’s important to get these nuances right.

In situations where an English speaker would say “my” or “me,” Koreans often use “our” or “we” instead.  This practice is rooted in Confucian traditions and communal values.

As  Beom Lee, a Korean language professor at Columbia University, explained to the BBC:

“Korean people use ‘uri’ when something is shared by a group or community, or when many members in a group or community possess the same or similar kind of thing. [It’s] based on our collectivist culture . . . “Korean people always use uri nara(our country) instead of nae nara(my country). ‘Nae nara’ sounds weird. It sounds like they own the country. Nae anae (my wife) sounds like he is the only person who has a wife in Korea.”

If you’re still debating whether or not you should “just use Google Translate” for your business content, well, these subtle linguistic differences are a good reason to just say no to free machine translation!

Looking for Korean translation services? At K International, our skilled linguists are ready to be your voice in another language. Take a look at our wide range of language services, and feel free to contact us!