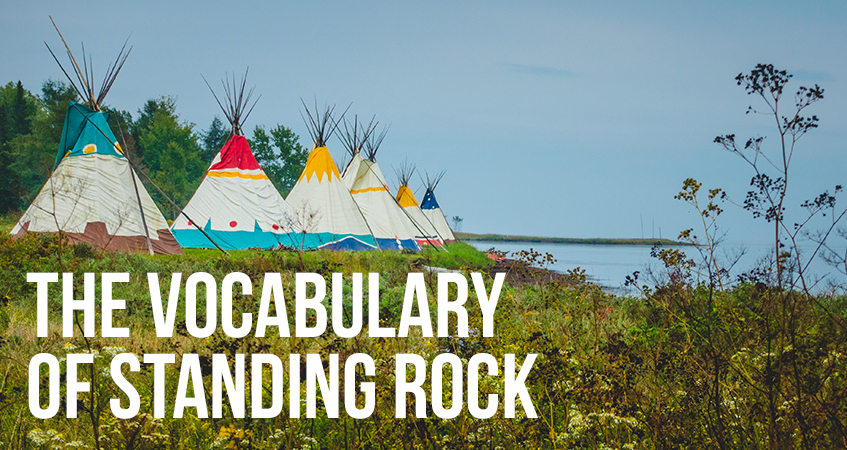 Earlier this week, over one million people from around the world “checked in” to the Standing Rock Indian Reservation via Facebook. “Checking in” is an easy way for people to show support for the Standing Rock Sioux tribe.  The tribe is protesting oil pipeline construction that they believe threatens their water supply as well as sacred archaeological sites.

Fast Facts About the Sioux Languages

Lakota Words and Phrases You Might Have Seen on the News

Hau: “Hello” or “Yes.” (used only by men, at least in some dialects.) This is why every virtually every Native American character in every  old movie greets people with “How.”
Han: “Hello” or “yes” for women.
Mni: Water. But as tribe members explained to The Stranger,

“The word “Mni” has two parts that signify a much richer meaning: “Ni” means “to live” and the “M” prefix references the first person.
‘So water literally translates to ‘it gives me life,’ Matt Remle, a Seattle-based Lakota activist and the nephew of Ladonna Brave Bull Allard, the woman who started the Sacred Stone Spirit Camp, explained. “

Mni woconi: water is life
Oceti Sakowin: “7 Council Fires” This is what the Sioux Nation calls themselves. “Sioux” is actually a slang word derived from Chippewa and French.  Furthermore,  it meant “little serpents” or “little demons.” So, it’s probably safe to say it wasn’t intended as a complement. An alternative explanation is that it comes from an Algonquin word meaning “foreign language speakers.” Either way, the tribe, like many others, has gone into the history books and government records under a name someone else gave them.
Wakan Tanka: The creator. Literally, “The Great Spirit” or “The Great Mystery.”
Oyate: “Nation” or “People”
Tatanka Oyate: “Buffalo nation” or “the buffalo people”
Wašté: Good
Taŋyáŋ yahí: Welcome (singular)
Taŋyáŋ yahípi: Welcome (plural)
Wóiyaksape: Words of wisdom, passed from elders to young people

The Future of the Lakota Language

What’s next for the Lakota language? It’s hard to say. Most Lakota speakers are older. As mentioned above, Ethnologue calls it “threatened,” which means it’s “used for face-to-face communication within all generations, but it is losing users.”

However, there are efforts being made to reverse the damage. For example, Standing Rock’s Sitting Bull College offers Lakota courses and hosts an immersion program for children.  A girl’s school that focuses on Lakota language and culture recently opened on the Pine Ridge Reservation.

Other languages have certainly been worse off and recovered. Plus, according to linguists like Bucknell University Professor Richard Henne-Ochoa, even if children aren’t picking up the language, they are still learning traditional Lakota speech patterns:

“In any culture, there are certain ways of speaking and particular styles of verbal communication, and Lakota culture is no different,” Henne-Ochoa explained. “Even though Lakota children primarily speak English, they still use Lakota ways of communicating and have sophisticated repertoires of communication. So, even though few Lakota children speak Lakota today, the language is very much alive in terms of Lakota ways of speaking.”

Henne-Ochoa believes that this might make it easier to restore the Lakota language.

Why Language Is Important

No matter what happens with the pipeline, hopefully, the tribes will be able to preserve their language and culture. It’s important. According to Professor Henne-Ochoa,

“Letting the language go is not an option for many Lakota people because it is a core element of their identity as individuals and as a sovereign nation, and because they see it as essential to their own cultural survival.”

His conviction is echoed by Lakota activist Alayna Eagle Shield, who believes (based on personal experience) that preserving indigenous languages and cultures can help mitigate the social problems caused by growing up poor and marginalized:

“[L]anguage is public health and public health is language for indigenous people. Our overall well-being has everything to do with how connected we are to our identities, and our languages help bridge that gap. I definitely believe that our people are will do better in all disciplines by gaining a mastery of their languages and cultures.”

Previous Post 6 Truths About Multilingual Customer Service You Need to Know
Next Post Vogue: The Language of Fashion

2 thoughts on “The Vocabulary of Standing Rock”