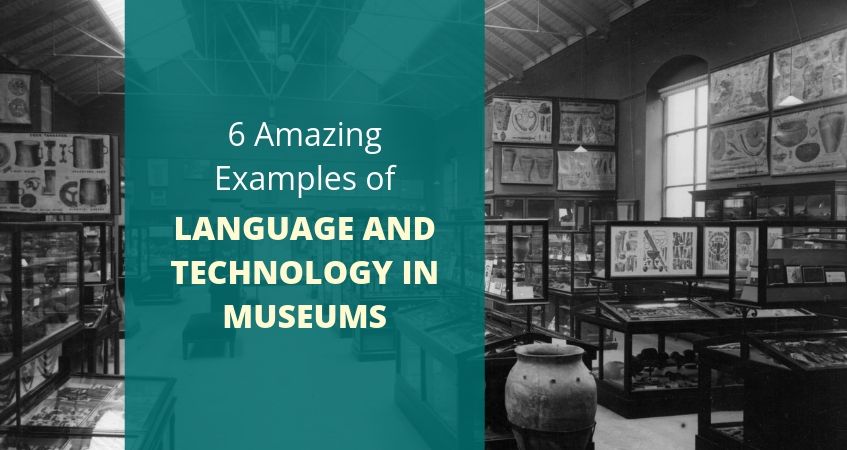 Whether as a result of increased immigration, increased international travel, or both, museums serve an increasingly multilingual audience. To create exhibits that excite and inform visitors in a variety of languages, some institutions are taking advantage of technologies like QR codes, apps, geolocation, specialised websites and augmented reality.

Read on for six amazing examples of language and technology in museums.

Remember when QR codes were supposed to be the next big thing? The Amsterdam Museum has come up with a clever, useful way to use QR codes to assist multilingual visitors.

As curator Laura van Hasselt explained to Museeum.com,  the museum recorded short films and voiceovers in 10 different languages to make the museum more accessible to international visitors. But then, they had to figure out how to make that information available:

“But how do you put 10 voice-overs to one film? We needed some technique with which everyone could easily find his or her own language. That’s how we start the exhibition – with a leaflet in which you can find the basic information on the exhibition, but there is also a QR code on the front. We made it in 10 languages: Dutch, English, French, German, Spanish, Portuguese, Chinese, Japanese, Russian, Italian”.

“With this QR code you can scan your leaflet, the film will start in your language. This is the technique we’re using to reach out to the international audience, which we so far find very successful. It’s more welcoming and you make it easier for people to look and explore. That’s what you really want people to do in the museum – to look.”

In 2015, the Holocaust Memorial Miami Beach released a multilingual museum tour app with an associated microsite.

The app, available for both iPhone and Android, offers support in English, French, German, Haitian, Hebrew, Portuguese, Russian and Spanish.  Meanwhile, the microsite makes the information available to online visitors in the same languages, with subtitles available for translated videos.

One common obstacle that museums encounter with mobile tour guide apps is that visitors don’t want to wait for the app to download. According to Voices of the Past, the Holocaust Memorial Miami Beach addresses this issue by offering help and encouragement for individual visitors as well as school groups. The payoff? An improved visitor experience. According to Voices of the Past,  “they report that the app greatly enhances their experiences afterwards.”

Meanwhile, the microsite is often used for research and drives traffic to the website from around the world.

The Natural History Museum of London is using a multilingual app to guide visitors around the museum.  Geolocation features help visitors find exhibits, learn more about the exhibitions, and direct them to other nearby points of interest.

About 58% of our visitors are international, so we wanted to include multiple language options to help us reach more visitors in their native languages. Adobe Experience Manager Mobile makes it much easier to manage a multilingual environment so that we can keep our international visitors up-to-date with the latest information.

In 2015, The University of Texas at Austin hosted an exhibition of The Crusader Bible: A Gothic Masterpiece.  The illuminated manuscript features inscriptions in Latin, Persian and Judeo-Persian. The museum used Layar, an existing augmented reality app, to add detailed translations of each language.

According to Koven Smith, the museum’s Director of Digital Adaptation,

“The app definitely added an additional layer of interpretation that would have been almost impossible to deliver via traditional labels. Given the subject matter of the exhibition, visitors were more eager than usual to engage with the narrative of the works themselves, and the app enabled them to do that.”

About 20% of exhibition visitors used the app. The museum provided dedicated iPads to ensure the experience was accessible to everyone.

Some people who are Deaf or hard of hearing prefer to receive information in sign language (their native language) rather than written English when possible. The Fire Museum of Southeast Texas is making that possible with their free sign language video tours. The tours utilise QR codes. Each code opens up a video that shows a docent explaining the exhibit while an American Sign Language interpreter interprets.

The British Library and the Qatar National Library

Combining language services and technology can help make museum exhibits and collections available to people around the world.

For example, K International has worked with the British Library and the Qatar National Library to make the British Library’s collection of historical documents from the Gulf region available online, to viewers around the world, in both English and Arabic.  This is a demanding project. The was an enormous amount of content to be translated and digitised. To learn how we developed bespoke technology to speed up the translation process while maintaining consistent quality and reducing costs, read our case study.

Of course, even the most dazzling new technology can’t hide poor quality translation. Whether you’re creating multilingual exhibits the old-fashioned way with labelling and display text, building an app or using augmented reality, you need a language services team you can trust to give your visitors the best possible experience. At K International, our team of experienced linguists and other experts are here to help. Contact us for your next project today!