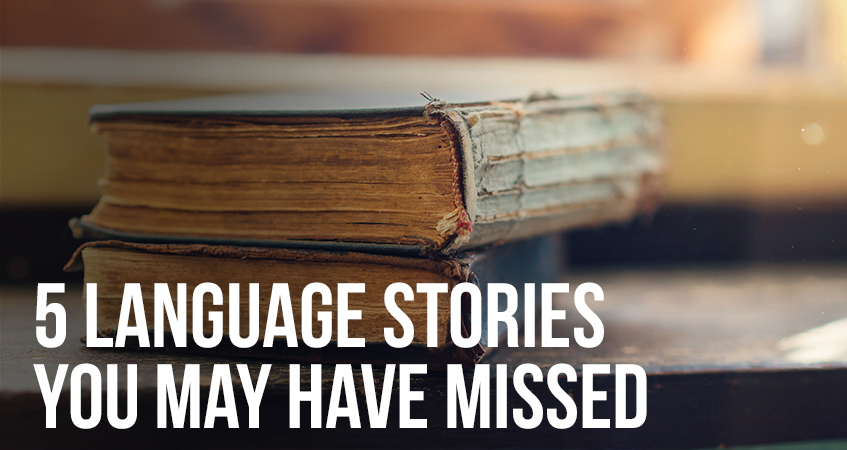 That means human interpreters will soon be obsolete, right? Not so fast. Quartz put it to the test here. The conclusion?

If you have a lot of patience and absolutely no knowledge of the language of your interlocutor, Skype will be a fun way to say hello or deliver a simple message. But for anything else, you’re still better off using broken English and body language.

Ouch. And they’re not the only ones to have tested it out and found it lacking.  Our very own  Monica Bloxam and Jochen Dehmel took on Skype on an episode of the Gadget Show. Get the details here.

Good literature properly translated has the power to cut through language and cultural barriers. But in the US and the UK, there isn’t much translated literature available. In the US, only 3% of the novels published each year are translations. For the UK, the numbers are even worse: only 2.5%.

Those statistics make Amazon’s announcement on 13 October kind of a big deal. The company is $10 million to have more foreign books translated into English. The books will be published under the AmazonCrossing imprint.

Know a good book that’s begging to be translated into English? You can submit it to Amazon here.

The US series “Homeland” is not exactly known for its nuanced portrayal of the Arab world. So, when they went looking for “Arabian street artists” to paint Arabic graffiti on a set, it’s not surprising they got punked. The artists decorated the set with subversive phrases like “Homeland is racist”, and “Homeland is a joke, and it didn’t make us laugh.”

They got away with it because nobody bothered to check. In the words of Heba Amin, one of the artists involved:

“The content of what was written on the walls, however, was of no concern. In their eyes, Arabic script is merely a supplementary visual that completes the horror-fantasy of the Middle East, a poster image dehumanizing an entire region to human-less figures in black burkas and moreover, this season, to refugees.”

Help in English (and other languages) is now just a phone call away for foreign tourists in Japan. According to the BBC, local government authorities in Japan have set up hotlines staffed by interpreters to help foreign tourists and service workers communicate. Japan is in the middle of a foreign tourism boom, and most of those tourists don’t speak Japanese.

Saga Prefecture has even put out a smartphone app, available here, that allows tourists to connect directly to their call centre.

A spokeswoman for the Saga Tourism Foundation told the Japan Times,

“We are now focusing on informing shops to expand the service’s use. We’ve gotten the fire department and the police on board as well, so you can use the service for help if you are involved in a traffic accident in a rented car or you need urgent medical help.”

This last bit of translation news is cautionary tale from the little town of As Pontes, in Spain. The town’s claim to fame is its annual grelo festival. Grelo is a leafy green vegetable similar to turnip greens.

“Grelo” is a Galician word. Galician is spoken by 2.4 million people worldwide and an official language in northwest Spain along with Spanish.  Although it is spoken in Spain, it is more closely related to Portuguese.

Unfortunately for officials in As Pontes, in Portuguese, the word grelo can either mean the vegetable…or it could be slang for clitoris. Care to guess which meaning Google Translate used?

According to the Guardian, the Spanish-language text on the town’s website promoting the festival read:

Oh dear! Town officials are considering filing a complaint against Google. However, they should probably take a look in the mirror instead. Surely they could have found a competent human to translate from Galician to Spanish…or at least to proofread!

For its part, Google’s defense of its own translation tool shows why you shouldn’t trust it for important content:

“Google Translate is an automatic translator – that is, it works without the intervention of human translators, using state-of-the-art technology instead…Since the translations are generated by machines, not all translation will be perfect and sometimes there will be mistakes or mistranslations. If people come across incorrect or inappropriate translations, they can let us know about them and we’ll be happy to fix them as soon as possible.”

Don’t want to give Google Translate a chance to muck up your content? Learn more about our translation services!

Previous Post The Multi-Lingual Digital World: Why You Need to Translate Your Site
Next Post 7 Language Learning Hacks