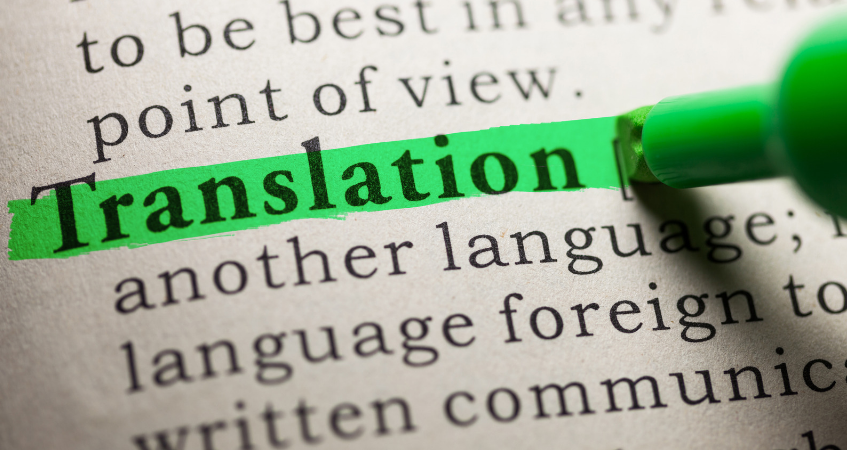 Can you believe we’re already one month into 2018? So, what’s been going on the world of languages? Settle in, get cozy and let’s find out. Here are 10 stories about language and translation that are worth reading and sharing.

Only about 3% of literature published in America is translated from another language.

In response, the National Book Foundation is adding a new award to its list: The National Book Award for Translated Literature. According to Executive Director Lisa Lucas,

“We want American readers to deeply value an inclusive, big-picture point of view, and the National Book Award for Translated Literature is part of a commitment to that principle. The addition of this award lends crucial visibility to works that have the power to touch us as American readers in search of broadened perspective.”

No, Google Translate is not ready to replace humans

A generation that grew up on science fiction is still eagerly awaiting for their universal translators. But Google Translate is nowhere near that capable. Read this article from the Atlantic and follow along as translator Douglas Hofstadter puts Google Translate’s deep neural networks the test. Then, watch as it fails miserably.  Score one for the humans!

Why are so there so many bad menu translations?

When it comes to unfortunate translation mistakes, foreign menus are amongst the most frequent offenders. Everything from roasted children to fried crap has been spotted on translated menus. In this article from Atlas Obscura, culinary translator Emily Monaco digs deep to figure out why so many food translations are simply unappetizing.

Facebook had to apologize last week after its machine translation program translated the word “Métis” as “half-breed.” The Métis people are a Canadian group descended from First Nations and European settlers, with their own specific and distinct culture. The word “half-breed”, of course, is a racial slur.

Overall, not a great week for machine translation.

How to design for translation

When translating documents from one language to another, layout issues are not uncommon. Different languages simply take up different amounts of space on the page. (For more, see 5 Reasons Multilingual Typesetting is Harder Than You Think.) This article gives some helpful tips on designing documents so that they’re easier to translate.

All languages change over time, and Korean is no exception. This year, North and South Korea are playing on the same team in the Olympics.  But while they still speak the same language, seven decades of separation mean that it’s kind of like British and American athletes playing football together.

Well, not that bad, since we can’t even agree on what football is, but you get the point.

A handy guide to the language of Davos

If “Euro-English” makes your head spin,  get a load of “Davos English.” Here’s your handy guide to all of the oh-so-important sounding buzzwords.

What could be better than the original Harry Potter? Harry Potter in Scots, of course! Or should I say, “The Laddie Wha Lived.”

In the Scots version, Dumbledore is “Dumbledore” becomes “Dumbiedykes,” and Quidditch becomes “Bizzumbaw.” Scots is close to enough to regular English that you should be able to read it without much of a problem and just different enough to make an old story seem new again.

As he should. Marvel’s Black Panther, which premieres in the US on 16 February, features a few lines in the indigenous African language IsiXhosa.

According to Quartz, South African actor John Kani, who plays the first Black Panther, added the isiXhosa lines after asking the directors “Why am I speaking English to my son?’ We are supposed to be from Africa.”

Music transcends language, according to this Harvard study.

In the study, listeners were able to consistently identify lullabies, dance songs and healing songs from around the world. They did this based on melodies alone, without language cues.

That said, it appears love songs are not so universal and depend on language to get their meaning across.

As Professor Max Krasnow told the Boston Globe, “Our speculation is that with love songs, what makes it a love song is the words being used. There aren’t specific sounds that are associated with love songs.”

Would a snail by any other name taste as savory?

Apparently, English-speaking diners are more likely to eat snails if the slimy crustaceans are described as “escargot.” Surprisingly, it’s not because they are ignorant of what escargot actually is. According to a new study, using a foreign word to describe food that people have an aversion to reduces that aversion and makes them more likely to eat it.

The authors of the study hope to use the results to market sustainable but “gross” foods like mealworm cookies and artificial meat. As lead author Janet Geipal explained on the University of Chicago website,

“A native tongue has a higher emotional resonance than a foreign language because it is used more often and in more emotional contexts. By using a foreign language you take away some of the emotionality attached to ‘insects’, and thus help override a barrier that prevents the consumption of insect-based food.”

What stories did we miss? Let us know in the comments!