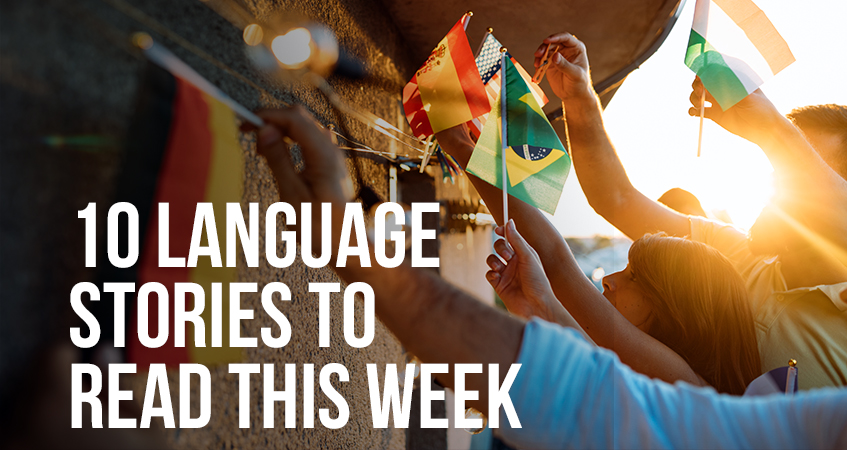 Looking for some new reading material? Wondering what’s been going on in the language and translation world? We’ve collected 10 language-related stories from the past month. They’re guaranteed to make you laugh, make you cry and give you plenty of office conversation material.

So, sit down, fill up your coffee cup, and let’s dig in.

How Translation Wages Affect the Popularity of Foreign Classics in China

Earlier this month, we posted a story about how literary translators are the unsung heroes of the literary world -and how they are frequently underpaid. This story from The Sixth Tone shows why low wages are a problem – it affects quality in a big way:

“[B]oth translators and editors are forced to work for paltry wages, and under such unfair working conditions, it is difficult to improve the quality of translations. This in turn gives translations of foreign literary works a bad name among Chinese readers, perpetuating a vicious cycle.

What Language Should Algeria Speak?

Next, let’s take a look at how Algeria is currently struggling to balance the country’s four major languages: French, Standard Arabic, Berber, and Darija. It’s quite a challenge to juggle the different languages used at home, on the streets, in the schools, and in courts.

New imaging techniques have allowed scholars to read the “undertext” of ancient manuscripts. Hundreds of years ago, parchment was valuable.  In an old-school example of recycling, scholars would erase words from old manuscripts so they could be used again.  Some of these manuscripts landed in St. Catherine’s Monastery in Egypt, where scientists have been able to uncover the lost writing, including long-forgotten languages like Caucasian Albanian and Christian Palestinian Aramaic.

Could Twitter Wars Against Russian Trolls Cause Google Translate Glitches?

That’s the contention of this article.  The author argues that by using Google Translate to argue with Russian speakers on Twitter, Twitter users could potentially skew its algorithm and lead to more Google Translate fails.

Could it happen? Possibly. If nothing else, it’s a good reminder that the potential for translation errors always exists without human oversight.

Nuclear tensions are escalating, and translation errors aren’t helping. This sobering read from the Bulletin of the Atomic Scientists points out that translation errors in news coverage helped push the US and the Russians closer to the brink of nuclear conflict during the Cold War . . .  and that may be happening again with Iran today.

Has the prospect of nuclear war got you down? Check out this hilarious compilation of Croatian-to-English translation fails! Nuclear Armageddon may be nigh, but if it strikes in the next few minutes at least you’ll go out laughing!

The Greatest Translation Fail of All Time

Best translation fail. The arabic spells out a transliteration of ‘meat ball’ in English – which sounds like ‘mayit baul’, or Dead Paul. pic.twitter.com/zReTm93Gg8

Mashable calls this the “greatest translation fail of all time.” OF ALL TIME.

Earlier this week, Ars Technica discovered that someone had gamed the Google Translate Live algorithm so that it translated the Korean characters for “Supreme Leader” (Kim Jong-Un’s official title) into “Mr. Squidward.”

So, at least for a brief, glorious moment in a live translation app, Mr. Squidward became the Supreme Leader of North Korea.

Which naturally leads to the question: “Would the world be better off?”

Want to learn a less common language? TribaLingual is a new startup that teaches e-courses in hard-to-find languages like Mongolian, Ainu, Quechua, and Buryat, the endangered language of founder Inky Gibben’s maternal grandparents. She told Fast Company that she”“wanted to do something more important with far more impact than writing a dissertation. There were many other languages out there that awaited this fate.”

The Elfdalian language, an endangered language with 2,000 speakers in a remote part of Sweden, gained some international speakers over the summer thanks to a week-long course that attracted 26 people from around the world.

One cool thing about Elfdalion is that it split off from Old Norse in the Middle Ages and has developed in relative isolation since then. So, it has even more in common with Old Norse than Icelandic does.

What language and translation stories did we miss? Share them in the comments!

0 thoughts on “10 Language Stories to Read This Week”