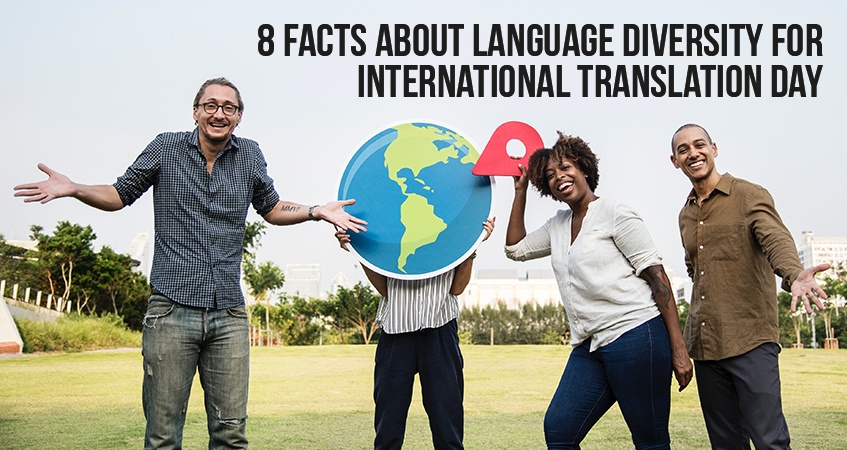 Every year has a theme. The theme for 2017 is “Translation and Diversity.” So, here are 8 fascinating facts about language diversity around the world.

There are over 7,000 languages in the world today.

7,099 to be precise, at least according to Ethnologue. But the exact number is up for debate and constantly changing.  This uncertainty exists for a number of reasons.

First of all, it’s sometimes difficult to draw the line between a language and a dialect. So, the way languages are classified can change. Unfortunately, languages can also die out. Occasionally, linguists discover new languages in remote parts of the world. For example, researchers found a new language in India in 2013.

And every so often, linguists catch a brand new language evolving.

1/3 of languages are endangered.

The exact number of languages in the world might be up for debate. But one thing we do know for certain is that many of them will probably fall silent in the decades to come. Languages die when people stop passing them on to their children. According to Ethnologue, 1/3 of the languages in use today are endangered. In addition,  according to UNESCO’s  Atlas of the World’s Languages in Danger:

Language diversity is vanishing. Every 14 days, a language dies.

Anywhere from 50% to 90% of the languages spoken today are expected to be extinct in 100 years.

Most languages are spoken by small groups.

A small group of speakers isn’t what makes a language endangered, though. As long as the people in that group pass their language on to their children, the language will survive.

But having a small group of speakers does make a language more vulnerable. Small populations are more vulnerable to war, disasters and to social, political and economic pressures. All of these things can lead to languages becoming endangered or dying.

Only 3% of the world’s languages are indigenous to Europe.

Europe has around 225 indigenous languages, which is only about 3% of the world’s total.  Meanwhile, nearly 2/3 of languages hail from Asia and Africa.  Why are there so many languages? A variety of factors including climate, migration and even rainfall probably influence language diversity and distribution.

Papua New Guinea has the most languages in a single country.

This tiny country, about the size of the state of California, has almost 850 different languages! The first settlers reached New Guinea at least 40,000 years ago. In the thousands of years since then, different languages evolved amongst small tribes and villages separated by rugged, unforgiving terrain.

There’s no doubt that language diversity is threatened around the world. But there are some encouraging signs. For example, according to studies by FUNREDES, language diversity is increasing online. In 1996, 80% of web content was in English.  But by 2005, that number had dropped to just 45%. Other top online languages include Chinese, Spanish, Japanese, Portuguese, German, Arabic, French, Russian and Korean.

According to the International Federation of Translators, translation is an important element in preserving languages and cultures:

“Translation is important both to maintaining and learning from a culture. Globalisation brings greater international cooperation, but the downside of that can be cultural homogenisation, which in turn threatens diversity. In an effort to access global markets effectively, products and services are often translated with sensitivity to the target culture, rather than imposing the culture of the source content. This type of translation, called localisation, thus supports diversity.

For more on why translation is important, see Why Translation is Important In A World Where English is Everywhere.

How to Celebrate International Translation Day

Here are just a few of the ways people are celebrating International Translation Day around the world:

The British Library will be celebrating on Monday, 02 October, with a day of seminars and workshops. Topics include “seminars on gender and sexuality in translation, translating human rights, new initiatives for and by literary translators, sessions focused on poetry and Arabic, and a mass translating for theatre workshop.”

Link Campus University of Rome, Italy is hosting the 15th edition of the ‘Days of Literary Translation” symposium on campus from 29 September to 1 October.

The United Nations is celebrating with a documentary photo exhibit called “Day-to-Dayness of Language Professionals: Bringing Nations Together” at the UN Headquarters.

Right here at K, we’re showcasing some of our amazing linguists, without whom we just wouldn’t be able to do what we do. A massive thanks to everyone who’s been part of our translation team through the years, you’re all superstars!

How are you celebrating International Translation Day? Let us know in the comments!