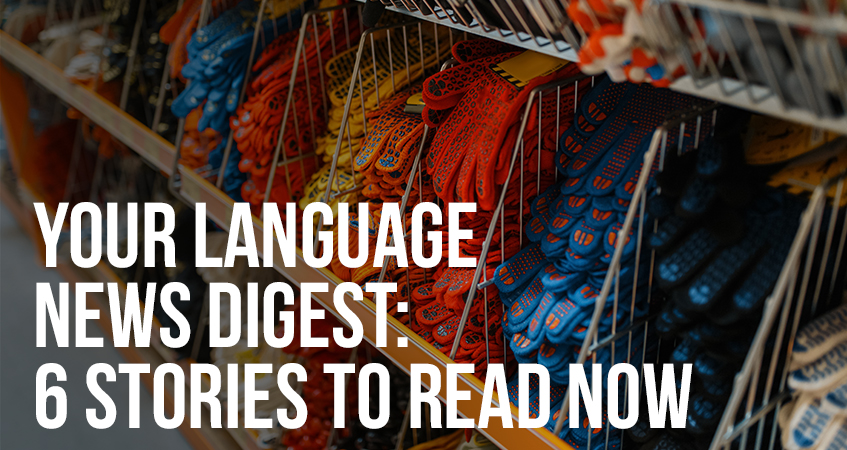 With so much going on in the world right now, it’s no wonder if you haven’t been keeping up with all the latest language and translation stories. Let’s get you caught up, shall we? Here are 6 fun and interesting language news articles from the past month.

Apparently, George R.R. Martin has some competition from beyond the grave, from one of the world’s most notorious dictators. UK publishing house Hesperus has announced it will be publishing an English translation of a Saddam Hussein novella in December 2016. Just what you wanted in your stocking, right?

According to the Guardian, “Hesperus described the book as “a mix between Game of Thrones and the UK House of Cards-style fiction”, and said it was full of political intrigue.”

The book is being used to launch an imprint focusing on “Eastern” literature. Which raises the question: Couldn’t Hesperus have found a more deserving author to honor?

Given that the New York Times called it “a forgettable piece of pulp,” it seems safe enough to assume that Hesperus isn’t publishing the novella for its literary merit.

So, who should they have gone with instead? Suggest your favorite un- or under-translated “Eastern” author in the comments!

As a child, I remember giggling over Roald Dahl’s “The BFG.” “BFG” stands for “Big Friendly Giant.” Though I was delighted to realize it could also stand for “Big Farting Giant,” because what schoolchild doesn’t like potty humour?

Now, everyone’s favorite flatulent giant has been given a Scottish makeover, courtesy of Black and White Publishing and Glasgow University’s Dr. Susan Rennie. The new translation celebrates Roald Dahl’s 100th birthday and the BFG movie coming out this summer.

From the Guardian, here’s a sample of The GFG, or the Guid Freendly Giant:

“It wisna a human. It couldna be. It was fower times as lang as the langest human. It wis that lang its heid wis abune the upstairs windaes o the hooses. Sophy opened her mooth tae skelloch, but nae soond cam oot. Her thrapple, like her hail body, wis frozen wi fricht.”

An error on a translated sign at old B&Q Parc-y-Llyn Retail Park store in Llanbadarn Fawr advised would-be shoppers to look for the nearest open B&Q store…in the United States.

In English, the sign said “We have moved. You can find us…” and gave the next closest B&Q address. In Wales, “us” turned into “Unol Daleithiau,” which is Welsh for “United States.” Oops! This is why we proofread translations…

2 ambitious EU-funded research projects aim to improve machine translation for all of the European Union’s 24 languages. Does that mean the machines are taking over? Not quite.

“Improved translation software should also benefit trade within the European internal market. But that doesn’t mean that translators are going to run out of work; quite the contrary, in fact, according to van Genabith: “Computers can translate huge quantities of text far faster than a human. But the translations won’t be perfect, so that, depending on requirements, translators will still need to post-edit the texts.”

US-based translators, take note: LinkedIn’s ProFinder service has rolled out to 10 major US metropolitan areas. The service aims to connect freelance service providers with clients, and translation is one of the service categories.

Interestingly, translation also seems to be getting special treatment as a category. “Project description forms” are available which are customised with details appropriate for translation projects.

But will anyone use it? Slator.com is skeptical:

“To be sure, many have failed at trying to create a functioning translation marketplace. The complexities are high, the returns, low. What sets LinkedIn apart from others that have tried is its unrivalled user base and the lack of a need to turn a profit on the project.
Still, the chance that LinkedIn will make a dent in the transactional online-translation market in the medium term are slim.”

This capability is already available for Facebook Pages, although we would strongly caution against using it for business purposes without having a translator or native speaker to proofread!

Eventually, everyone on Facebook will be able to use it. Either the world will sing in perfect harmony…or, to paraphrase Hitchhiker’s Guide to the Galaxy, World War III will break out. Read more here.

Which of these stories is your favorite? Which stories did we miss that should have been included? Let us know in the comments!