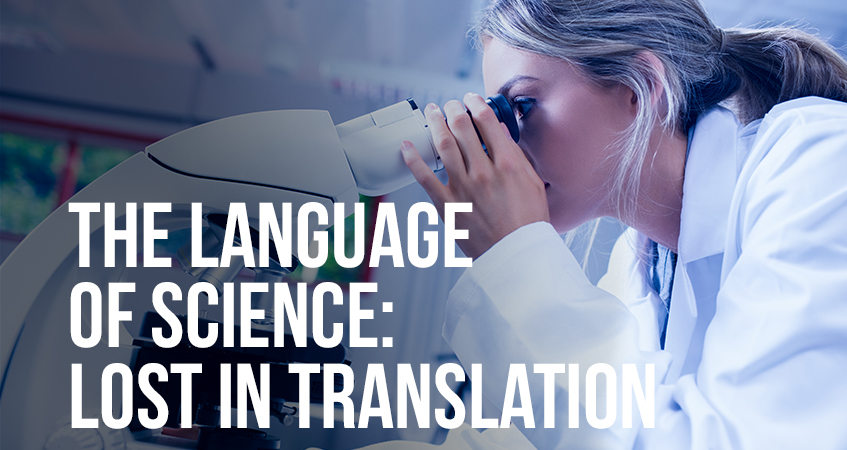 These days, most scientific work is done in English. But why is English the “language of science” when brilliant scientists come from all corners of the globe? And does it matter?

We like to think that science transcends language. After all, experiments are experiments and data is data, right?

Actually, language and translation have always been vital to the progression of science. The English language’s current dominance is relatively new, and has had both positive and negative effects.

How English Won Out As the Language of Science

The first scientists most definitely did not speak English, or even Latin or Greek. They spoke the languages of ancient Egypt, ancient Mesopotamia, and ancient China. Then came the ancient Greeks and Romans. Their work was later translated by medieval Islamic scientists and scholars, who in turn went on to produce their own impressive discoveries.

By the Renaissance, translators had translated most of the Arabic and Greek texts into Latin, allowing European scholars to build on the knowledge they contained.

Latin was “the language of science” from medieval times up to the mid-1600s. Galileo Galilei was one of the first scientists to publish his work in his own language first. It was then translated into Latin for broader consumption.

By 1900, German was the dominant “language of science,” but it was followed closely by French and English.

The Rise of English

Then came World War I. German scientists were blacklisted by scientists from Western Europe. And America fell victim to an all-too-familiar strain of isolationism. The German language was outlawed in almost half the states for almost a decade. And according to Princeton professor Michael Gordin, that’s also when Americans as a whole lost interest in learning other languages.

After World War I, American scientists rose to occupy a central position on the world stage. As Professor Gordin explained to PRI, the new rising stars of the scientific community were:

“[A] set of people who don’t speak foreign languages. They’re comfortable in English, they read English, they can get by in English because the most exciting stuff in their mind is happening in English. So you end up with a very American-centric, and therefore very English-centric community of science after World War II.”

To be fair, the rise of English as the dominant scientific language has had some benefits.  Now, with anywhere from 75% to 90% of scientific papers published in English, it’s possible for native English speakers and fluent ESL speakers to stay fairly well-informed on topics of interest without any further translation help.

But there are some disadvantages, too.

To Get Attention, Scientists Have to Speak English

To attract the attention of the broader scientific community, research has to be published in English. And that means that anyone from a non-English speaking country who wants to make a name for themselves has to not only learn the required knowledge for an extremely demanding field, they also have to learn it in their second language. Then, they have to express their ideas in that language.

Native English speakers? They get a free pass on that aspect.

As Professor Gordin explained to NPR,

“native speakers of English, who are a minority of people who practice the sciences and engineering in the world today, basically have an ease in this language that they get for free when they’re children. And everybody else comes by it laboriously.”

How laboriously? Slate interviewed a Chinese science student, Minxuan He, who said

“It is hard to get things right, to put down the right words. Often I will write down a sentence thinking it means exactly what I want to say, but then find out that the words don’t actually mean what I think.”

And then there are the embarrassing translation errors, such as this one, also described in Slate:

Chinese scientists discussing the electrical conductivity of copper nanotubes in a 2007 Royal Society of Chemistrypaper, for example, chose a rather unfortunate acronym for the subject of their study. (It rhymes with “runt.”) The acronym has stuck: A new study from this year in Science China, an English-language journal, uses the shorthand—innocuous to people who don’t know English slang and amusing for culturally immersed Anglophones, but hardly helpful for scientists wishing to be taken seriously.

Even when their research is published in English, scientists from non-English speaking countries are often overlooked in favour of their colleagues from countries like the US, the UK and Canada.  They have trouble getting credit for their own contributions, even when the work itself gets covered in the press.

For example, as science journalist Federico Kukso explained to the Smithsonian:

He gives an example from earlier this year, when an accomplished Argentinian paleontologist named Sebastián Apesteguía helped discover a new species of dinosaur. Most English-language media didn’t even mention him, instead focusing on his American collaborators.

That had to have been at least a little demoralizing, as well as discouraging to aspiring Latin American scientists.

Loss of Knowledge From Other Languages and Cultures

If you publish a scientific paper in a language other than English, will anybody read it? Maybe not . . . and that could be a problem.

Sure, most scientific literature is published in English. But not all of it. And some of what’s getting ignored can have global consequences, even for those of us who aren’t scientists.

In areas that are closer to practical application, like agronomy and clinical medicine, a large amount of material is published in local languages because you need to be able to talk to your patients or talk to farmers or peasants. And that information takes some time to percolate up into English.

During the Zika epidemic, for example, much of the original research was published in Portuguese.

And in the dreaded “bird flu” epidemic of 2004, the World Health Organization and the United Nations learned of the possibility of the virus infecting humans 8 months after a Chinese study was published suggesting that it was a possibility. That’s 8 lost months of preparation time for what could have been (but fortunately wasn’t, at least in the West) a particularly deadly epidemic.

But haven’t we been here before?  What’s the difference between using Latin as a scientific lingua franca, and using English?

Well, for one thing, back when Latin was the “language of science” it was a second language for everyone. That probably did give an advantage to upper-class scientists, who would have been more likely to learn it in school. It also meant native English speakers didn’t start out with an advantage, and scientific translations were perhaps more eagerly sought out.

But now, as Cambridge’s Tatsuya Amano puts it, “Native English speakers tend to assume that all important information is in English.”  And that’s a problem.

In his NPR interview, Professor Godin suggests relaxing standards for written communication (although that may risk more clarity and communication issues.)

Meanwhile, Tatsuya Amano believes that journals should make more of an effort to offer translations, even if they are only summaries.  Previous recommendations have included having universities hire professional translators specialising in science, although that would likely be expensive.

Tags: Science
Previous Post 7 Fun Facts About New Year's Resolutions Around the World
Next Post Which Languages Are Closest to English?