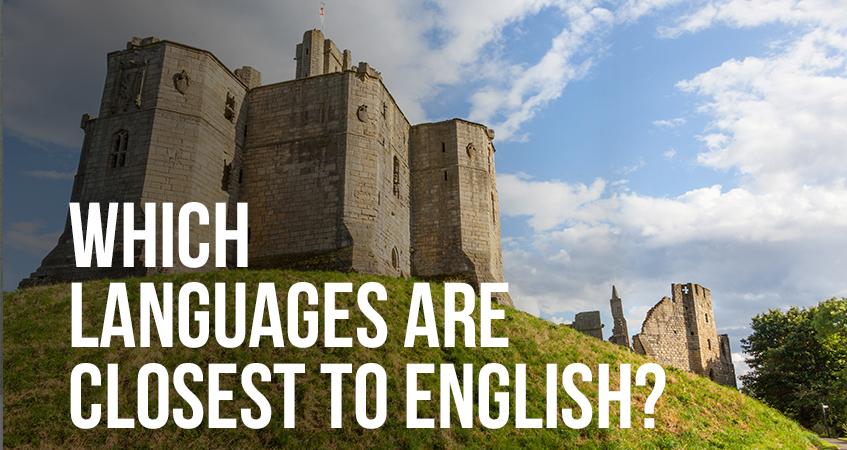 The Closest Language to English: Scots

The closest language to English is Scots . . . assuming you consider Scots a language, that is. According to a 2010 study by the Scottish government, a majority (64%) of Scottish people don’t.

And yet, Scots began to diverge from English as far as back as the Middle English period.  The UK government classifies it as a regional language and it is protected under the European Charter for Regional or Minority Languages.

Fast Facts About the Scots Language

Scots is not only the closest relative of the English language, it’s also been heavily influenced by its “big brother.” So, how easy is it for an English speaker to read Scots? Try it for yourself!

Aw human sowels is born free and equal in dignity and richts. They are tochered wi mense and conscience and shuld guide theirsels ane til ither in a speirit o britherheid.

Got that? It’s Article 1 of the Universal Declaration of Human Rights. Here’s the English translation:

All human beings are born free and equal in dignity and rights. They are endowed with reason and conscience and should act towards one another in a spirit of brotherhood.

The Closest Languages To English: Frisian

Frisian is actually a group of 3 languages spoken in parts of the Netherlands, Denmark, and Germany. English, Scots, and the Frisian languages are the only living members of the Anglo-Frisian language group.

The sentence “Butter, bread and green cheese is good English and good Frise” is pronounced almost the same in both Frisian and English. Despite this, the two languages are not mutually intelligible.

See how much of this you can make out:

That’s the first article of the Universal Declaration of Human Rights, this time in West Frisian.

The Closest Languages to English: Dutch

You might have heard that Dutch is the closest language to English. Indeed, it’s the closest “major” language and is sometimes said to be “in-between” English and German.

Because it’s so closely related to English, Dutch is one of the easiest languages for English speakers to learn. Here’s Article 1 of the Universal Declaration of Human Rights again, this time in Dutch:

As you can see, you’ll still have to study!

The Closest Languages to English: German

German is also closely related to English. English is, after all, a Germanic language. German is spoken primarily in Germany, but it’s also officially recognized in other localities around the world, even places as far-flung as Brazil.

Fast Facts About the German Language

Germany shares 60% of its vocabulary with English. How much of this sample text can you understand?

The Closest Languages to English: Norwegian?

Say what? Most scholars place English in the West Germanic family, along with the other languages listed above. But not all of them. University of Oslo professor  Jan Terje Faarlund believes it’s more closely related to the Scandinavian languages.

He argues that because Old English borrowed significant amounts of vocabulary and grammar from Old Norse when England was under Viking rule, Old Norse essentially “replaced” Old English as the language transitioned into Middle English.

So, why out of all of the Scandinavian languages, am I choosing to feature Norwegian here? Norwegian is closer to English than either Danish or Swedish. In fact, it’s often described as the easiest of the three languages to learn.

Here’s Article 1 of the Universal Declaration of Human Rights again, this time in Norwegian (Nynorsk).

Can you see the similarities to the other languages, and to English?

As you can see, even languages that are closely related If you need translation services, trust K International and our network of professional translators!

12 thoughts on “Which Languages Are Closest to English?”