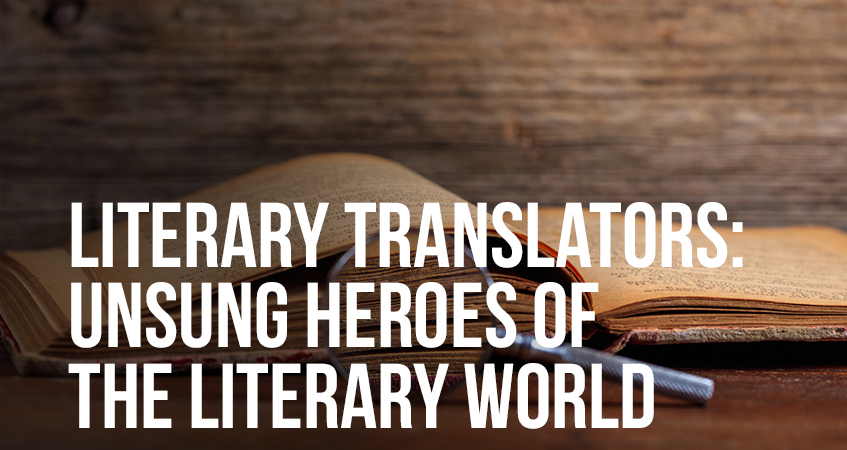 Today, let’s take a moment to highlight some of the unsung heroes of the publishing world: Literary translators.

Literary translators do not have an easy job. Books, short stories, and poems can be quite challenging to translate.  For example, word play, slang, and humor often lose meaning if they’re translated word-for-word. They have to be carefully rewritten to create the same effect in the target language as they do in the original.

So literary translation is difficult, but it’s also extremely valuable.

Why is Literary Translation Important?

Literary translation is important for a number of reasons. Translation introduces authors to new audiences and readers to new worlds. It promotes understanding and empathy between cultures.  It preserves ideas and knowledge and helps transmit those ideas across time and space.

Meanwhile, if people don’t like a translated work, it’s often the translator who takes the fall.

Literary translators definitely aren’t in it for the money, either. Pay rates are low, especially when you consider how tricky literary translation can be. And translators can’t always count on clients to make sure they get their due.

For example, in Spain:

“ACE Traductores says there are 3,167 professional literary translators in Spain. However, one in three only gets to translate one or two books per year. And the average gross income for the translators is only around EUR 5,000 per year.”

A literary translator is unlikely to plough through translation at a speed of 2,500 words or more daily like their peers in business translation. Therefore, actual average hourly rates are likely to be very low.”

And low rates aren’t the only issue. In many countries, literary translators are supposed to get a commission from the book sales. But that doesn’t always pan out. In fact, according to Slator, only half of Spain’s literary translators receive annual royalties. And 7 out of 10 don’t receive data on book sales for their translations, even though they’re legally entitled to it.

And in Germany, only 46% of literary translation contracts meet the minimum requirements for commissions set up by the German Federal Supreme Court.

Spain and Germany aren’t the only countries where low rates are a problem, either. In December 2008, the European Council of Literary Translators’ Association(CEATL) compared literary translator’s incomes throughout the EU.  Their conclusion? Literary translators are basically starving artists:

Nowhere in Europe can literary translators make a living under the conditions imposed on them by the ‘market’; in many countries (including some of the wealthiest) their situation can only be described as catastrophic.

There have definitely been some steps forward since 2008. For example, in 2016 the Man Booker International Prize changed to include the translator along with the author.

But low rates remain an issue. And so most literary translators, if only by necessity, translate books as a side job.

Is that necessarily a bad thing? CEATL argues that it is, saying ” What are the implications for the quality of literary exchanges between our societies if literary translators have to dash off their work in haste in order to keep body and soul together?”

But as one translator on the Pro-Z forums noted, low pay is also a problem for the authors they translate. She asks  “[W]hy, after all, should I presume to be able to make a living translating books by writers who themselves had other jobs, who made their livings selling scrap metal, working as journalists, diplomats, editors, translators, civil servants?”

It’s true: most creative writers have other full-time jobs, too, whether that’s waiting tables at a restaurant or other, more lucrative types of writing.  And Tim Parks of the New York Review of Books believes that having to take other types of translation jobs helps literary translators hone their skills, saying:

If I myself learned how to translate more or less well it was because of the fifteen years spent translating just about every kind of document a society produces, from shoe fashion magazines to instructions for manufacturing diesel filters.

But it doesn’t seem fair that such a difficult and specialized skill should pay so little. And so it seems like the least we can do is offer some appreciation.

So, here’s to literary translators, the unsung heroes of the literary world.

Without them, we wouldn’t have The Little Prince, or The Girl With the Dragon Tattoo or Anna Karenina or … well, you get the idea.

And if you’re looking to translate your book into another language, give us a call. We’d love to help you find the right translator!

0 thoughts on “Literary Translators: Unsung Heroes of the Literary World”