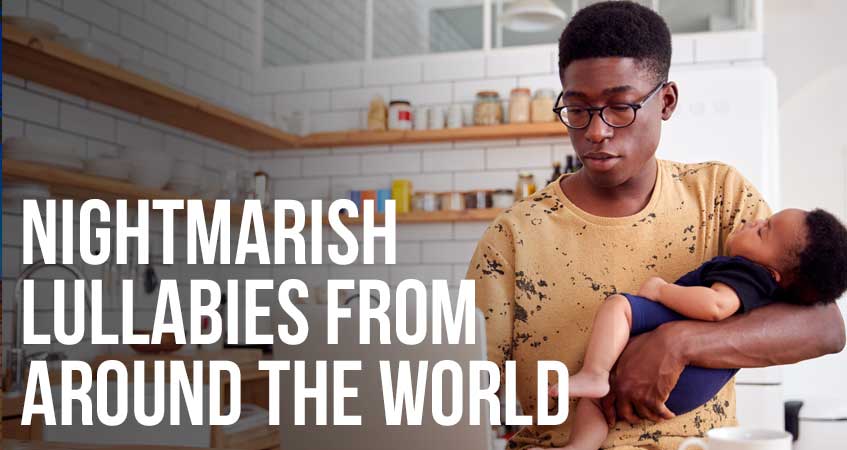 Mothers everywhere sing babies to soothe them to sleep. But the songs we sing are sometimes less than comforting. Consider, for example, the first verse of Rockabye Baby, which ends with a baby falling out of a tree.

Like the original versions of most fairy tales, there’s a dark undercurrent in a quite a few of the traditional songs we sing to our children. And the urge to soothe babies with creepy songs is apparently found almost everywhere. Need proof? Here are 12 sweet-sounding but nightmarish lullabies from around the world.

Nightmarish Lullabies from Around the World: Iceland

When it comes to creepy lullabies, Iceland may take the prize. Here are 2 examples:

The scene described here would make an excellent opening for a horror movie. Here’s an English translation:

The title of this song translates to “Sleep, My Young Love” or “Sleep, My Young Darling.” That sounds innocuous enough- but the backstory makes it anything but. It was originally written for a play about Iceland’s most famous outlaws, Fjalla-Eyvindur and his wife, Halla. In the play, Halla sings it to her newborn daughter . . . right before she throws the child off a waterfall so she can continue to elude the authorities. Sleep, my young darling, indeed.

Who’s afraid of the big bad wolf? Your child, if you sing them to sleep with this popular Russian lullaby. Here’s a translation:

Baby, baby, rock-a-bye
On the edge you mustn’t lie
Or the little grey wolf will come
And will nip you on the tum,
Tug you off into the wood
Underneath the willow-root.

This lovely song features a triple threat: the Cuca, a child-eating alligator; a black-faced ox (apparently with human hands, the better to grab you with, my dear); and the bogeyman:

Here’s a translation, via Mental Floss:

Hush little baby
Cuca is coming to get you,
Papa went to the fields, mama went to work.

Black-faced ox,
Come grab this child
Who is scared of grimaces.

Bogeyman
Get off the roof
Let this child sleep peacefully.

In the last verse of the song,  Bicho Papão is a shape-shifting monster that turns into whatever the child fears most.

What’s scarier than the lip-syncing in this video? The lyrics to the song, which makes “Rockabye Baby” seem tame by comparison.

Sleep my baby,
Sleep, baby, do!
The bogeyman’s coming
And he will take you.

Sleep my baby,
Sleep, baby, do!
The bogeyman’s coming
And he will eat you.

The “bogeyman” in this song is the coco,  a legendary monster that originated in Spain and Portugal. Nobody knows exactly what it looks like. But it lurks in the closet, under the bed . . . basically every place you were afraid a monster would hide when you were a child.

The refrain of this song says it all. It translates to “If you don’t sleep, the crab will eat you.”

If the prospect of being dragged away by a crocodile or a giant crab doesn’t lull your little darling to sleep,  surely werewolves will do the trick, right?

In the hollow paths of the moor,
The black goblins, the werewolves,
In the night, in a saraband*
Chase one another like mad.
I hear a noise near the door,
Close your eyes, my little boy
The nasty werewolf takes away
The children who don’t sleep.

Sleep, little baby,
The little baby doesn’t want to sleep.
The jumbie will eat him
The soukouyant will suck his blood.

A jumbie is a type of demon or evil ghost.  A soucouyant is a type of vampire-witch that drains the blood of sleeping victims and trades it to a demon for evil powers.

You know, just the type of thing you want a small child to think about as they drift off to sleep . . .

This is a traditional lullaby from the Isan region of Thailand. It is sung in the Lao language.

This song continues the trend of threatening your baby with some sort of supernatural harm if they don’t just go to sleep already:

If you don’t sleep, ghost cats will bite your cheeks.
If you don’t shut your eyes, tiny chicks will peck them.

You can listen to a recording of the song here.

This traditional Turkish lullaby tells the story of a couple who finally conceived a child after years of infertility after the husband promised to sacrifice 3 camels.

But after the child arrived, the man reneged on his promise. And so, black eagles flew down, took the child from its mother and ripped it to pieces. The event is described in graphic detail for a children’s song:

I wasn’t able to find an audio or video for this one, but you can find the complete lyrics and more about the story here [PDF].

A ninna nanna is simply an Italian lullaby. Some are sweet, some seem designed to make sure your children have lots of material for therapy later in life, and some seem designed to inspire nightmares. I’m not sure what this old song is called, but this translation from the Oral Translation journal makes it seem designed to terrify small children old enough to understand the lyrics. After all, nothing like imagining yourself being eaten alive by a wolf to help you drift off to sleep:

Rock-a-bye and rock-a-bye,
the wolf has eaten the sheep. o-o …
My little lamb, what did you do
when you found yourself in the wolf’s mouth? o-o …

The wolf, traitor and devourer
has eaten all of the lamb, o-o …
of the lamb only
the skin and horns and nothing else remain. o-o

These Scottish lullabies were supposedly written by the widow of executed Clan Chief MacGregor of Glenstrae to sing to her child. Here’s an excerpt from one, translated from Gaelic:

Though I am without a flock of sheep/ You, little baby, can go to sleep./ Darling, of the people of the great world/ They spilt your blood yesterday/ They put your head on an oaken post/ A little way from your corpse . . .”

In case this is unclear, the “head on an oaken post” here belongs to the father of the child who is being sung to sleep.

Sweet dreams, everyone . . . or should we say Rest in Peace?

Do you know of any creepy lullabies not mentioned here? Let us know in the comments!

9 thoughts on “12 Nightmarish Lullabies From Around the World”