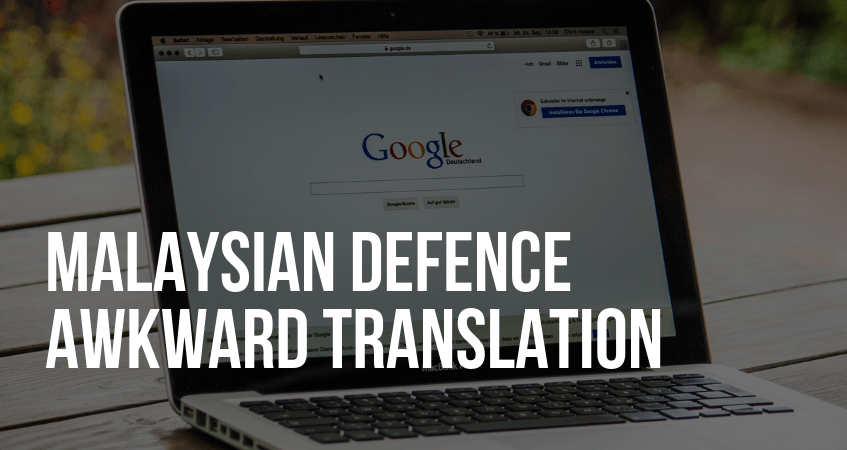 Last week, the Malaysian Ministry of Defense posted an English translation of its dress code for employees on its web site. Unfortunately, it appears that they didn’t make arrangements to have the translation work done by a competent translator. The results were predictably hilarious and awkward.

Some of the issues stemmed from simply atrocious grammar. For example, this rather convoluted sentence comes from a screen grab of the web pages in question, now hosted on Scribd since the originals have been taken down:

“Therefore, how to dress and clothes are clean, tidy and appropriate to be standard practice is emphasized to the officers and staff.”

Well, then. That’s enough to give any English teacher a fit, but at least you get the gist of it. But, it gets worse. Women working at the Malaysian Ministry of Defense are advised not to wear “Clothes that poke eye” or “Dress up that thought it seems to want to attend a party or picnic.”

On Thursdays, Male employees who aren’t required to be in uniform must wear “long sleeve batik shirt with collar/ mongoose fight.”

Two mean, carnivorous animals fighting- yes, that’s exactly what I want to be wearing around my neck!

After people got wind of the page’s translation issues, the Ministry became the target of mockery across social media sites like Facebook and Twitter, according to the Uppercaise blog. As a result of the publicity, the English version of the site was taken down.

Malaysian Minister Datuk Seri Dr Ahmad Zahid Hamidi told the Star that the errors were due to Google Translate, saying “We have corrected the mistakes and translations are no longer done that way. It is now done manually.”

While these sorts of translation errors are often the fruit of relying on “free” machine translation, Uppercaise discovered that the official statement was probably not the whole story. They ran the original Malay on the site through Google Translate and found significant differences from the translations posted on the website.

The origin of this particular translation fail may always be shrouded in mystery, but the lesson is clear: When it comes to translating your website, take the time and spend the money to use a qualified translation firm!