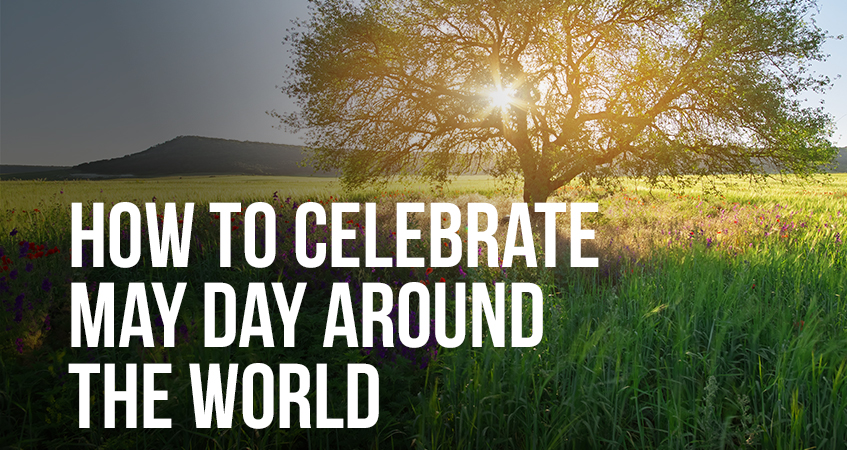 Yesterday was May Day, and that means it’s time for a party. Or a protest. Maybe both.  Why are May Day celebrations around the world so different? To find out, let’s take a look at the history of the holiday and the places where it’s celebrated.

Traditional May Day Celebrations Around the World

In the northern hemisphere, May Day celebrates the coming of spring (or of summer, depending on where you are).  Many May Day traditions have roots that go back to before the arrival of Christianity.

For example, the ancient Romans celebrated the end of April with a six-day-long festival in honour of the goddess Flora. The festival featured games, performances, “lustful” animals like hares and goats running rampant, flowers and a sacrifice to Flora at the end.

Meanwhile, Celtic cultures traditionally observed Beltane on the first of May, with bonfires, flowers, decorating a May Bush, and offerings to the fairies to keep them from making mischief at the expense of the villagers’ herds.

Traces of these ancient rites remain in traditional May Day celebrations around the world, often mixed in with Christian beliefs.

For example, in parts of the UK, May Day celebrations include dancing around a maypole, crowning a May Queen and traditional morris dancing. Some towns have also brought back Jack in the Green, a drunken ruffian character clothed in foliage. Jack in the Green was once a common sight at May Day festivals until Victorian morals did away with him.

Meanwhile, Cornwall hosts unique May Day celebrations, including the ‘Obby ‘Oss festival in Padstow and Flower Boat parades in Kingsand, Cawsand, and Millbrook. For the  ‘Obby ‘Oss festival, villagers decorate the town with a maypole, flowers, and greenery.  Teams of dancers parade through the town. One of them carries a model hobby horse with jaws that snap shut and tries to snatch young women as they pass by.

During the Flower Boat parades, participants cover a model sailboat in flowers.  The boat moves through each town in turn, accompanied by a parade of townspeople.  Cawsand Beach is the end of the line, and there “the boat is then launched into the sea, banishing any wicked weather as it goes.”

In Scotland, Edinburgh hosts the Beltane Fire Festival, an overnight party with dancing, performances, and (as you might have guessed) fire. Lots and lots of beautiful fire.

The Swedes celebrate May Day the day before, on April 30th. Yes, April 30th is Walpurgis Eve (or Valborg), not May Day. But the traditional activities are suspiciously similar to May Day celebrations elsewhere: bonfires, singing, and parades. For students, a breakfast including champagne and strawberries has become a modern tradition (and one that’s well worth poaching, no matter where you’re from.)

Like the Swedes, the Finnish traditionally celebrate the coming of spring on April 30th, which they call Vappu. It’s one of the four biggest holidays on the Finnish calendar. Traditions include:

In Germany, Walpurgisnacht (April 30th) and May Day are both opportunities to “Tanz in den Mai”  or “Dance into May.” Celebrations include parties, bonfires, and maypoles (called maibaum).  In some parts of the country, secret admirers deliver maibaum to girls in the night.  Meanwhile, secret haters deliver maibaum wrapped in all-white streamers, the old-school equivalent of a “thumbs down.”

In Italy, May Day is called Calendimaggio or cantar maggio. Singers called maggerini deck themselves out in flowers and fresh green sprigs of alder. They go from house to house, singing songs about spring in exchange for small gifts like eggs, wine, and sweets.

In Romania, May Day is called arminden,  ziua pelinului (mugwort day), or ziua bețivilor (drunkard’s day).  It should come as no surprise that for many, the holiday involves drinking copious amounts of red wine, sometimes flavored with mugwort.  Fresh spring greenery is used as decoration, and oxen get the day off from work, too.

Bulgarians celebrate May Day as Irminden.  Interestingly, most Bulgarian May Day traditions involve warding off lizards and snakes. Bulgarians stay out of the fields to avoid snakebites and build bonfires to scare the reptiles away.

Most parts of the United States don’t celebrate May Day. But Hawaii does. They call it Lei Day. Oahu’s Queen Kapiolani Park holds the biggest Lei Day celebration, with a lei-making contest, live music and more. Instead of a May Queen, Hawaii has a “Lei Queen.” The Lei Queen is chosen ” based on their lei-making skills, hula proficiency, and Hawaiian language fluency.”

So how did a traditional spring celebration turn into an international day of protest? May 1st is also International Workers’ Day. The date was chosen to both coincide with the existing holiday and to commemorate the Haymarket Affair in Chicago. On May 4th at Chicago’s Haymarket, a protest turned violent. Both police and protestors died.

Today, countries around the world celebrate  . . . But not in America, where it’s officially National Loyalty Day, an anti-communist holiday that nobody except the President really celebrates anymore.

What did you do on May Day?

Tags: Holidays
Previous Post The Future of the Icelandic Language
Next Post 9 Language and Translation Stories Worth Reading