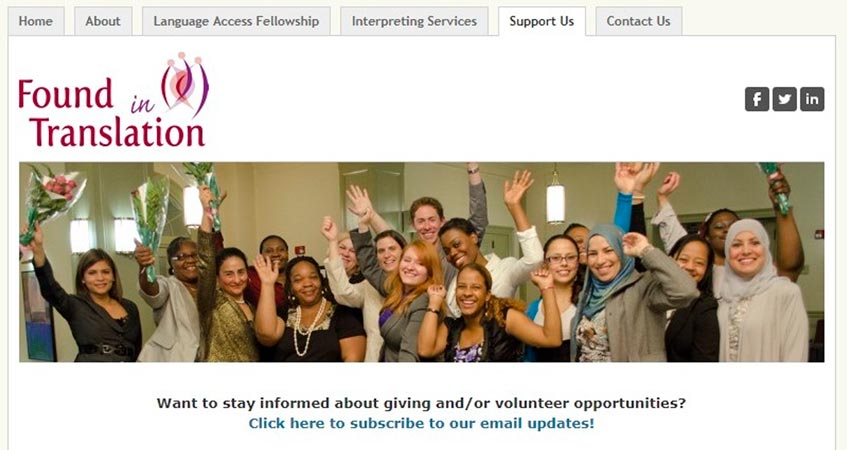 A charity in Boston, Massachusetts is helping local women get out of poverty by training them in medical interpreting. Called Found in Translation, the organisation trains bilingual women, usually immigrants or children of immigrants, to use their existing language skills to become medical interpreters.

Why does medical interpreting make such an excellent career choice for poor immigrants? Three reasons:

Medical interpreters provide an essential service in doctor’s offices and hospitals. They help doctors accurately understand patients’ symptoms and histories. They help patients understand what’s happening with their care and treatment. Often, no interpreter is available and the job falls to the family member with the best English skills. Usually, that’s a child. And that’s a huge responsibility for tiny shoulders.

According to Mashable, Found in Translation founder Maria Vertkin was inspired by her own experience as a six year old “medical interpreter.”

The problem is that family members, especially children, don’t have the skills to be good translators in a health care setting.  They may be fluent in both languages, but that’s not enough. As Matilde Roman, senior director of medical interpreting firm New York City Health and Hospitals Corporation, told Mashable:

“Medical interpreting is a very finite skill set. Not only do you need to have competency or language proficiency in a target language and in English, but you also have to have a level of competency in medical terminology and ethics.”

According to their website, Found in Translation trains students in the skills needed to effectively and accurately interpret in a medical setting, including:

Once the 60-hour course is complete, the organisation helps place graduates in medical interpreting jobs. The program also offers mentoring, along with job skills training, childcare and transportation as necessary. Found in Translation also employs some of its students, using the money it makes as a medical interpreting provider to train more women.

As Vertkin explained in Mashable:

“We help them take their language skills and turn them into something that’s marketable in the workforce, which can get them out of poverty permanently.”

Medical Interpreting: Lives in the Balance

Found in Translation’s mission doesn’t just help the women involved, it benefits their communities as well. Lack of access to trained medical interpreters restricts access to healthcare and can lead to deadly medical mistakes. Probably the most well-known and expensive example is that of Willie Ramirez and the “$71 million dollar word.” Ramirez was only 18 when his brain started bleeding.  He was taken to the hospital. However, language and cultural differences made it difficult for his family to communicate with medical staff.

The family thought he had food poisoning, that he was “intoxicado” from eating a bad hamburger. The doctors interpreted “intoxicado” to mean “on drugs” and treated him accordingly. His intracerebellar haemorrage was left essentially untreated for more than two days.  As a result, he ended up quadriplegic. His family was awarded a $71 million dollar settlement to cover the cost of his care. Hence, the “$71 million word.”

The US has a perennial shortage of medical interpreters, especially in states with a large immigrant population. So does the UK.

Found in Translation is a genius idea because it’s a win-win for everybody.   Women and their families get a lifeline our of poverty, and their communities get access to qualified medical interpreters. It’s an awesome way to tap into the cultural and linguistic diversity of immigrant communities.  Vertkin told Mashable,

“Poor communities are rich in bilingual talent, and this is a skill the mainstream community is desperate for. To be able to identify that, and identify the people who have this skill to transition out of poverty, is a really unique thing.”

We could learn from this in the UK.  For example, according to the Guardian,

In its report Languages for the Future, the British Council highlighted the need for schools, educators and parents to utilise the language skills of the UK’s diaspora and minority communities, warning that failing to do so was a waste of resources.

And yet, the Guardian reported, many young bilingual Britons lack the opportunity to prove their language abilities with exams and qualifications. Meanwhile, 40% of young students with a home language other than English do not see their home language as an advantage.

Found in Translation gets some funding by providing interpreting services, but most of the organization’s funding comes from donations. If you’re feeling generous, find out how to donate here.