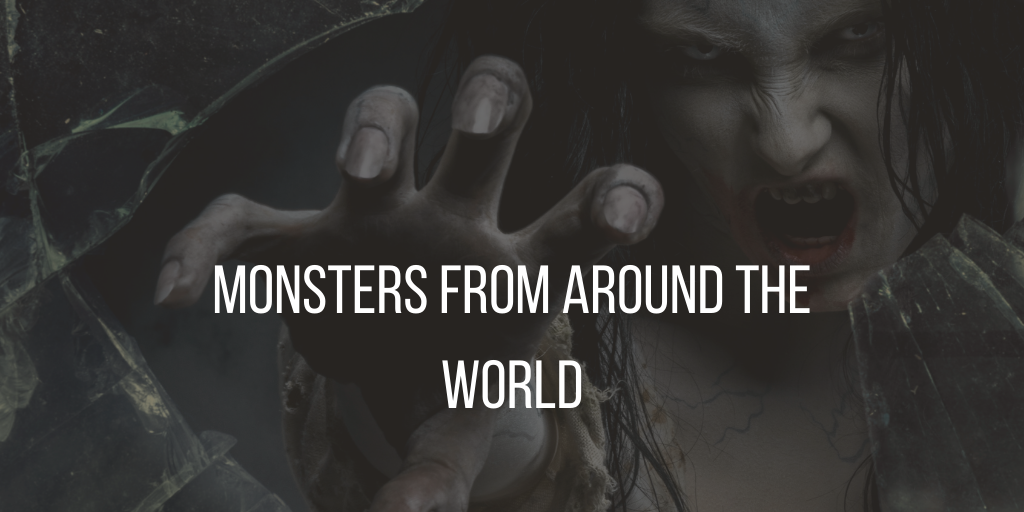 Every culture has its own version of “ghoulies and ghosties and long-leggedy beasties, and things that go bump in the night.” Traditional legends about vampires, zombies, and witches can be found across the globe, though the names and characterizations of these creatures vary depending on where you are. Just in time for Halloween, here are some international variations on your favourite horror movie beasties:

To Westerners, the most familiar version of the vampire myth is the one made famous by Bram Stoker: an undead, aristocratic monster that lives off of human blood and can change shapes at will. These characteristics come from older Eastern European legends and folk tales that became popular in Western Europe in the late 19th century.  Here are some different types of vampires from around the world. All have one thing in common: They want to suck your blood!

Abchanchu – This Bolivian vampire is said to take the form of an old, incapacitated traveller. If you stop to help him, he’ll drink you dry.

Manananggal – From the Philippines, this vampire has the form of an older lady with the wings of a bat. At night, her upper torso detaches from her lower body and she feeds on sleeping victims using a mosquito-like proboscis.

Krasue – This blood-drinking demon from Southeast Asia takes the form of the severed head of a beautiful woman, with entrails hanging down from the neck.

Obayifo – This evil entity from West Africa doesn’t even have to be physically present to drain the blood from your body.

Strigoi – One of the original vampires of Eastern Europe, the strigoi was said to be a person who died unmarried. Interesting fact: per Wikipedia, walking around a strigoi’s grave while burning hemp renders it helpless, perhaps from excessive giggling.

Like vampires, zombies are undead. Unlike vampires, they are not especially intelligent. The Zombie legend hails from the West African tradition of voodoo, in which they are basically undead slaves used by a wizard to perform physical labour.

There is also a similar creature in Chinese folklore, called the Jiang Shi. However, unlike West African/Caribbean zombies, the Jiang Shi was thought to be the result of an improper death or early burial. In many cases, they do not emerge from the grave until decades afterwards and the only master they serve is their own resentment.

Neither traditional African zombies or Chinese Jiang Shi are particularly interested in brains, however-credit George Romero with that.

Half-man, half-animal, were-creatures show up in folklore almost as frequently as ghosts and vampires. For example, the Navajo tell of the yee naaldlooshii, or skin-walkers.  Yee naaldlooshii are said to be humans who can transform into any animal at will. They often attack people.

Also, in much of Africa, it is traditional to tell stories of the bouda, an race of people capable of transforming into hyenas. In India and nearby countries, people tell tales of the weretiger instead.

0 thoughts on “Monsters from Around the World”