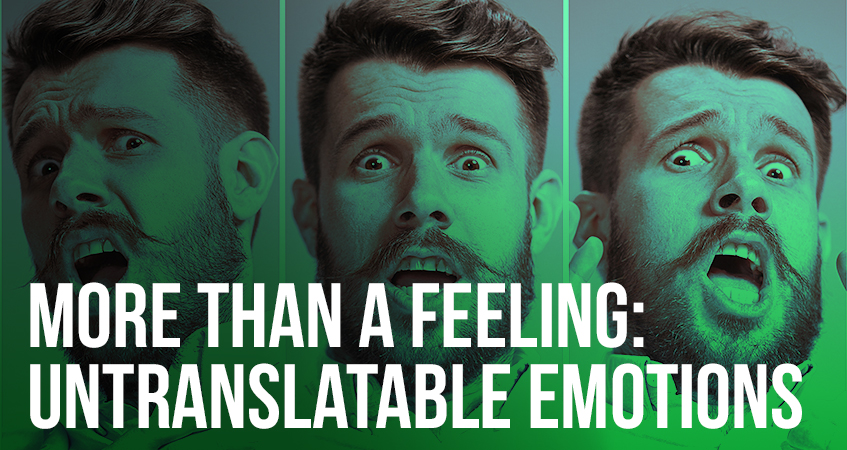 Having trouble putting your feelings into words?  Try another language! Emotions are universal, but the words we use to describe them are not.  To prove the point, here are 17 words for emotions with no direct English translation. Read through this list of untranslatable emotions, and see how many times you find yourself nodding in recognition.

Forelsket (Norwegian)- That walking-on-a-cloud feeling you get when you first fall in love.

Gigil (Filipino)- The uncontrollable desire to squeeze or pinch something cute.

Waldeinsamkeit (German): The peaceful, transcendent, contemplative feeling you get when you’re walking alone in the woods.

Schadenfreude (German): The pleasure you take from someone else’s misery, as illustrated below by Homer Simpson.

Ei viitsi (Estonian): That feeling you get when you can’t be bothered to go anywhere or do anything.

Hygge (Danish): The feeling of sitting down to a warm meal or around a cozy fire with your loved ones.

Iktsuarpok (Inuit): The uncontrollable desire to keep checking to see if a guest has arrived yet.

Voorpret (Dutch) (Pre-fun): The feeling of enjoyment you get from anticipating a future event before it even happens.

Abbiocco (Italian): The feeling of wanting to drift off into sleep after you’ve had  a big meal.

Wintercearig (Old English): “Winter-sorrow,” feeling cold like winter inside.  Slyvia Plath captures it in her poemWinter Landscape, With Rocks:

“Dry frost glazes the window of my hurt; what solace can be struck from rock to make heart’s waste grow green again? Who’d walk in this bleak place?”

Feierabend (German): That moment when you get off work and you’re ready to party.

Yugen (Japanese):  According to BetterThanEnglish.com, “An awareness of the universe that triggers emotional responses too deep and mysterious to be described.” Like, wow, man.

Santosha (संतोष) (Sanskrit): According to Dr. Tim Lomas, this is a feeling of “contentment arising from personal interaction.”

Tarab (طرب (Arabic):  “Musically-induced ecstasy or enchantment.” The feeling you get when your favourite song comes on the radio,  and you turn the volume all the way up.

Torschlusspanik (German): The feeling that life is passing you by;  a”fear of diminishing opportunities as one ages.”  Why does German have all the good words, anyway? Is there a German word for “the desire to learn German just so you can use all the cool German words in conversation without getting weird looks?” Because if there isn’t, there should be.

Yoko meshi (Japanese): That nervous, stressed-out feeling you get when you are conversing in a foreign language.

Saudade (Portuguese and Galician): According to Wikipedia, this is “the love that remains” after someone is gone… It describes a deep emotional state of nostalgic or profound melancholic longing for an absent something or someone that one loves.” It also implies that whatever you’re longing for is gone for good, never to return.

It’s always interesting to see how words vary from language to language and culture to culture…but what does it mean? Linguists have been fighting for decades over the answer to that question. But the Guardian’s Oliver Burkeman suggests that it might make a difference in terms of our emotional health:

But there are certainly words that aren’t easily translated and they frequently relate to feelings. Without the slightest bit of hard evidence, I’ve got to believe this makes a concrete difference to our emotional lives: if you don’t have a readily accessible label for a feeling such as “hygge”, might that not help edge it out of your emotional range, or at least from the kinds of things you find time in your schedule to do… hygge, a Danish friend explains, “is a conscious activity. ‘Let’s go to my house and cosy’ – it doesn’t make sense in English. But hygge is a verb as well as an adjective. It’s something you do.”

There’s also a lesson for businesses here about the importance of choosing the right translator, especially if you’re trying to create an emotional connection with your audience. A good translator understands the nuances of “untranslatable” words like these, in a way Google Translate simply can’t. How can you access your customers’ emotions if you don’t even know how they describe them? Not very well, obviously.  If you want the right words in the right language, there’s still no substitute for a qualified human translator.

Looking for translation services?  We can help with that!

What are your favourite untranslatable emotions? Let us know in the comments!

Previous Post French Spelling Fracas: New Rules Spur Protests
Next Post I Love You: How 3 Words Get Lost in Translation