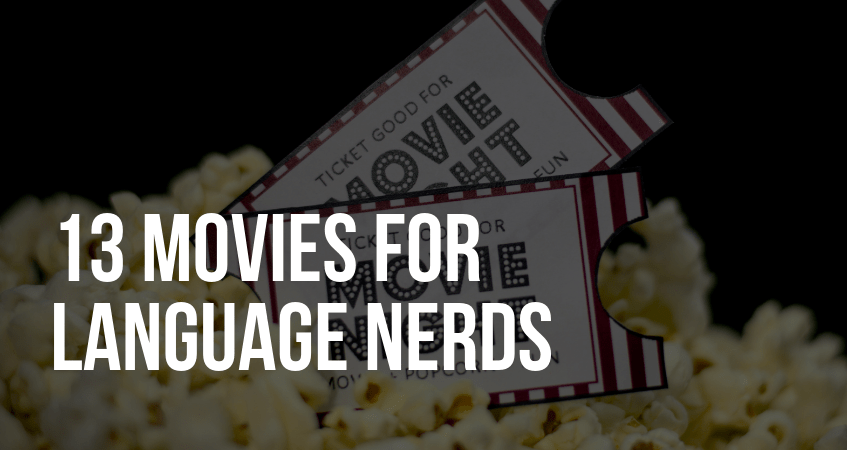 Are you in love with all things linguistic? Do you fancy staying in to watch a movie this weekend? We’ve got some recommendations for you. Presenting . . . 13 movies for language nerds like you!

A science-fiction movie that centers on translation and interpretation, with a linguist as the main protagonist? Yes, please!

Most movies about “first contact” smooth over the inevitable language barrier. In Arrival, the language barrier is the plot. And in the process, the movie reveals truths about translation that language nerds of all stripes can appreciate.

The Lord of the Rings Trilogy

Next, we have The Lord of the Rings. Because the best way (or at least the nerdiest way) to appreciate the time and effort J.R.R Tolkien put into creating the Elvish language is to get lost in the appendices of The Silmarillion . . . but hearing the language brought to life in the films is a close second!

Star Trek brought a dizzying array of alien races and languages to screens both large and small. The Klingon language, in particular, is no longer confined to the Star Trek universe. Pick your favourite, whether it’s one of the original films or the Next Generation series, and listen for these top Star Trek languages.  Which one is your favourite?

Bill Murray and Scarlett Johansson star in the romantic comedy about a couple of Americans struggling with culture shock in Japan.  As film studies professor Dr. Tessa Dwyer  noted in 2005, Lost in Translation  is a great movie for language nerds because it defies Hollywood’s “more usual tendency to ignore or deny issues of language difference” by highlighting Bob and Charlotte’s difficult contact with the Japanese language.”

James Cameron spared no expense to make this 2009 science fiction movie as realistic as possible, including hiring a linguist to construct a language for the tall, blue, elf-eared Na’vi to speak.  Inspired by Polynesian languages like Maori and by the Amharic language of Ethiopia, Na’vi has a vocabulary of over 2200 words and published grammar. You could even learn to speak it if you wanted to.

A script that one of the main actors referred to as “awful?” Check!  Stargate is definitely one of those movies that only appeals to certain types of people. If you like cheesy sci-fi and you’re interested in ancient Egypt, it’s worth a watch, if only for the chance to hear the language of the hieroglyphs spoken out loud.

Star Wars has enriched English with a variety of new words and catchphrases: Jedi, the force, and lightsaber, just to name a few.

And of course, it features C3PO, the best droid interpreter/translator of. all. time.

This 2004 movie features Tom Hanks as Viktor Navorski. Victor is a traveller from a fictional Eastern European country who gets stranded in a terminal in New York City’s JFK airport for 9 months.

As he arrived in America not speaking any English, Viktor has to learn it . . . and there aren’t any classrooms in the terminal.

As such, the filmmakers tried to present an accurate picture of how someone would learn a new language through immersion and time. According to linguist Martha Young-Scholten, they did a reasonably good job.

Kevin Costner’s epic, award-winning Western is one of the few movies in which you can hear the Lakota language spoken. However, there are some caveats: the pronunciation isn’t always entirely accurate, and in some scenes, the male actors apparently speak the “female” version of the language.

That said, the actors and the translator/dialogue coach, Doris Leader Charge, worked quite hard to make the dialogue as accurate as possible.

This is another one of those movies that won’t appeal to everyone. Critics panned it when it came out, but some people consider it a cult classic.

That said, author Frank Herbert obviously put a great deal of thought into creating the Fremen culture and language.

The Fremen are a desert people, and the intergalactic fight over “melange” is an allegory for the worldwide struggle over Middle Eastern oil. So, it was only natural for him to turn to the Arabic language for inspiration, and to a lesser extent, to indigenous South American languages.  For more, read this article.

Antonio Banderas plays Ahmed, a medieval Islamic court poet exiled to “barbarian” territory and forced to go on a dangerous mission with a group of Viking warriors. At the beginning of the film, he can’t speak a word of their language. But he soon learns.

This is not a linguistically accurate movie in any sense.  The Vikings would most likely have spoken Old Norse, but here they speak Norwegian Bokmål and Danish. And there are several other linguistic mistakes, all handily catalogued here.

Critics hated it…I remember enjoying it, but that may have been my schoolgirl crush on Antonio Banderas talking.  If you’re in the mood for a cheesy Vikings vs. cannibals flick, give this one a go.

You probably remember Alan Rickman as the Sheriff of Nottingham or Professor Snape. But before that, he played the ghost of  Julia Stevenson’s dead boyfriend in this quirky romantic comedy. Julia Stevenson’s character, Nina, is an interpreter.

Finally, we have The Interpreter. Nicole Kidman stars as UN interpreter fluent in the fictional African language of “Ku” in this political thriller.

Any favourites from this list?  Any movies we missed? Let us know in the comments!

Previous Post Star Wars Spoilers, Revealed in Translation
Next Post Which Countries Have the Most English Speakers?

7 thoughts on “13 Movies for Language Nerds ”