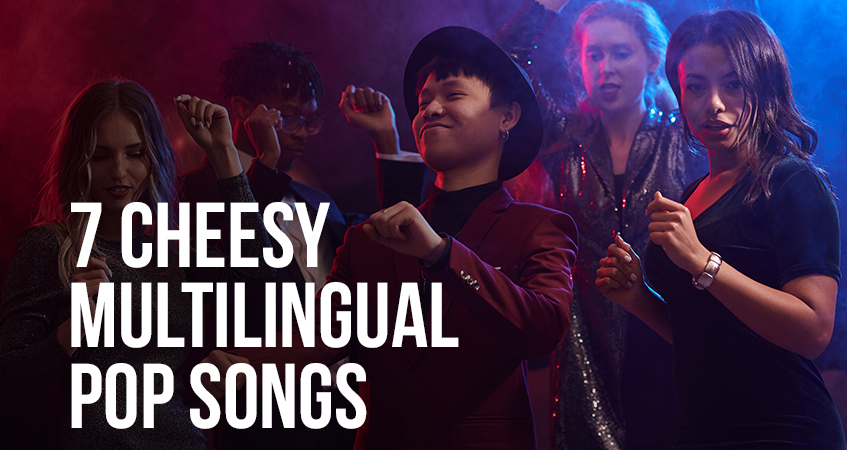 These days, the most popular songs around the world have lyrics in English. But there are certainly exceptions. And sometimes English-speaking artists will throw in bits and pieces of other languages for effect.

As with pop music in general, some of these songs stand the test of time better than others. For example, here are 7 cheesy multilingual pop songs that you’ll sing along with when nobody is looking.  Don’t worry, we promise not to tell!

Remember this one? Of course you do! And if you press play, it will probably be stuck in your head for the rest of the day. Don’t say I didn’t warn you!

“Macarena” (and the associated dance) was all the rage in the 90s.  The song was originally released by Los Del Rio in 1994.  Spreading first in Spanish-speaking communities around the world, it soon “went viral”(before that was a thing) and conquered everywhere else.

Top Chart Position: There are six versions of “Macarena,” but the partially English-language Bayside Boys remix is the one that hit #1 in the US and #2 in the UK.

Where are they now? Los del Rio is still around. They last released an album in 2012.  None of their other albums or singles were received with the same level of enthusiasm, but sometimes a one hit wonder is all you really need.

Before YouTube brought us legions of adorable Internet-famous toddlers, there was Jordy. At only four and a half, he made the Guinness Book of World Records for being the youngest singer to ever have a #1 single.  The song was released in America as “Dur dur d’être bébé! (It’s Tough to Be a Baby).”

And it is. . . especially when you’re trying to get lucky with the ladies but you’re stuck with parents like that!

Where is He Now? Due to concerns about exploitation, the French government put young Jordy’s career on hiatus. But in 2005, he returned to win the French reality show  La Ferme Célébrités 2, and in 2006 he resumed his musical career.

Here’s how a generation learned to say “Thank you very much” in Japanese. “Mr. Roboto” was the hit single from the 1983 Styx album Kilroy was Here.

Where are they now? Styx is still touring, although a reunion with original lead singer Dennis De Young appears unlikely.

Where are they now? LaBelle broke up in 1976. The members, especially Patti Labelle, went on to have long and distinguished solo careers. The group reunited most recently in 2008, releasing their first full album in 32 years.

Does the German language sound angry? It does when you’re Rammstein. Released in 2004, “Amerika” furiously critiques the global ubiquity of American culture. It’s at once darkly menacing and incredibly cheesy.

Where are they now? Playing shows in Europe starting this spring.

In 2012, this song took over the Internet.  It was the first song ever to receive one billion views on YouTube. It currently has more than 2.75 billion views and remains YouTube’s most- watched video of all time. Of all time!

Wondering what the lyrics mean in English? We have a translation!

Top Chart Position: #1 on essentially ALL THE CHARTS EVERYWHERE.

Where is he now? PSY last released an album in 2015. It didn’t take off like Gangnam Style outside of South Korea, but he remains the King of YouTube, at least for now.

For a brief time in the ’80s, “Rock Me Amadeus” made Mozart hip again.  “Rock Me Amadeus” was Austrian musician Falco’s only international hit. You might have heard it featured in various films and TV shows, like The Simpsons.

Top Chart Position: #1 in the UK, the US, Canada and most of Europe.

This list is obviously a bit arbitrary, so feel free to add to it in the comments!

Looking for more language songs for the translation industry? We have a list of those, too.