A new measure has been proposed in Wales to help encourage the use of the Welsh language there. According to the BBC, the new proposal, which was just published by the assembly government, has several key features. First, it would require some private sector companies to provide services in Welsh when requested by Welsh speakers. Telecoms, electricity and gas providers, bus and railway companies and companies providing sewage services would all be affected and could be fined for not providing adequate Welsh-language services. Public sector companies would also be required to comply. 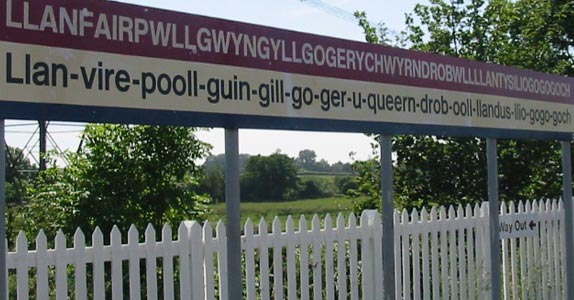 According to the Daily Post, the fines could be as high as ₤5000, and any company that receives more than ₤400,000 worth of money per year from taxpayers would be affected by the new requirements. Second, the proposed law would scrap the Welsh Language Board in support of appointing a Welsh language commissioner with increased power to enforce language laws.

First Minister Carwyn Jones told the BBC that “The proposed measure provides us with some of the tools we need to ensure that the Welsh language can continue to prosper into the 21st Century alongside the English language.”
However, some Welsh language advocates don’t feel that the proposed legislation goes far enough. For example, the BBC quotes Menna Machreth, chair of the Welsh Language Society (Cymdeithas yr Iaith Gymraeg), who welcomed the proposal but cautioned:

“This measure doesn’t affect much of the private sector. The assembly doesn’t have the powers for shops to be included in this measure, which we’ve been calling for because they are a massive part of day to day lives, and if we want to see the Welsh language as a living language around us, I think the Welsh language should be mainstreamed and pulled into the private sector as well.”