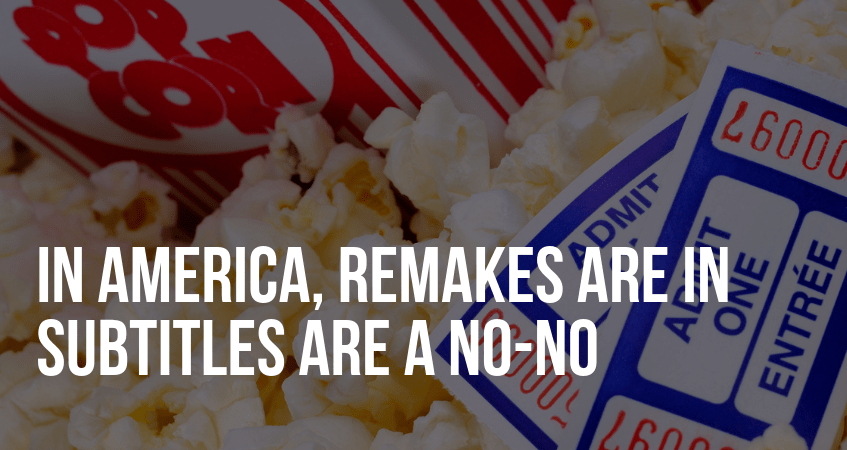 In the US, foreign language films don’t get subtitles, they get completely remade. At least, most of the time.  US distributors tend to avoid films with subtitles like the box-office plague, although there have been a few notable exceptions over the years, including Crouching Tiger, Hidden Dragon (also available dubbed into English) and Pan’s Labyrinth.

That’s not to say that Hollywood doesn’t recognize great foreign-language films, but rather than distribute the originals, the tendency is for studios to snap up the rights for English-language remakes. For example, according to the LA Times, American studios are currently trying to remake “Let the Right One In,” “Tell No One” and “The Girl With the Dragon Tattoo.” In Hollywood, it seems, imitation really is the sincerest form of flattery.

This is more understandable when you consider the fact that when foreign films are released in America, their performance tends to be disappointing.  Approximately 1000 foreign films have been released in the US since 1980. Only 22 have grossed more than $10 million during the course of their American box office releases. Most earn less than $1 million.

But is Americans’ apparent allergy to subtitles causing them to miss out on great movies? Remakes, after all, tend to differ significantly from the original films. Even faithful adaptations almost always use different actors and directors.  Movies are about more than just plot, even though a good plot is essential. I’m not sure “Pan’s Labyrinth” would have been quite as amazing with a different director and a different actress in the lead role.

The makers of The Girl with the Dragon Tattoo have decided to take their chances with the American market. William Schopf of Music Box, the company that is releasing the movie, told the LA Times that he is willing to take the risk because he has so much confidence in the Swedish version of the film. Hopefully, his instincts are proven correct.