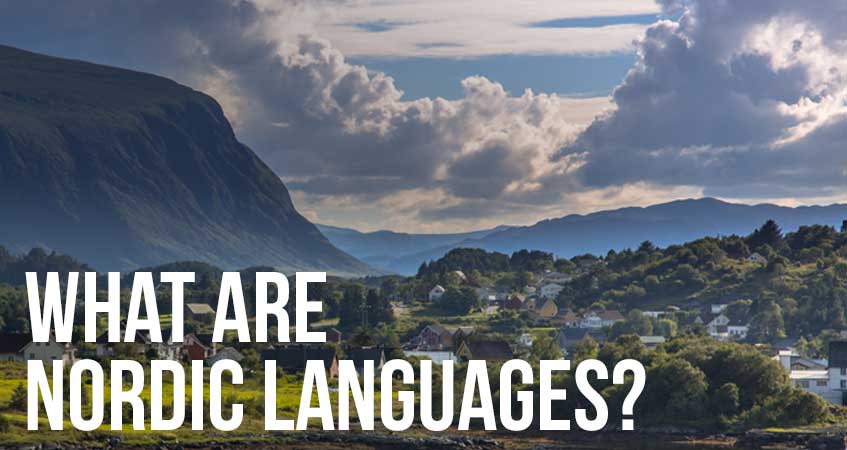 The Danish, Swedish, Norwegian and Icelandic languages are collectively known as the Nordic languages. Since they are all descended from Old Norse, these languages have a lot in common.

Naturally, they are spoken primarily in the Nordic countries. However, there are also small populations in Canada and the US that speak Nordic dialects.

Old Norse was the mother tongue of the Vikings, who carried it to Iceland and to various other settlements during the Viking Age. Old Norse evolved around the 8th century AD from an older language called proto-Norse. Although there were two distinct Old Norse dialects, Old East Norse and Old West Norse, the differences between the two dialects were minor and a speaker of one dialect would have no trouble understanding speakers of the other.

In the late 8th century, the Vikings burst out from Scandinavia to terrorise England, Ireland and Scotland as raiders and pirates. This explosion of activity was probably mainly due to population pressure in the Scandinavian countries at the time. Whatever the motivation, the Vikings and their longboats soon became a source of fear for coastal residents and sailors in surrounding countries.

The Vikings and their Longboats

When most people picture the Vikings, they picture huge savages in horned helmets destroying entire villages for fun and profit. Naturally, the truth is a little more complex than that. Also, several of the myths surrounding the Vikings are simply incorrect. For example, Vikings didn’t wear horned helmets. They wore conical metal helmets that might have had designs hammered into them, but never had horns attached. Also, they weren’t necessarily savages. At least, they probably were not any more savage than other Europeans alive at the same time.

The Vikings lived during an especially violent period in European history. Warfare was much more commonplace than it is now, and although Vikings certainly did there share of dirty deeds, they weren’t the only savages around. In his campaigns to Christianise the Saxons, for example, Charlemagne had 4,500 Saxon prisoners killed in one day in response to a rebellion. Charlemagne is often described as ‘wise’ and ‘kind’ by historians, so it seems that the pagan Vikings may have been the victims of a historical double standard. Vikings were not merely uneducated heathen thugs. They had an amazing culture with a rich set of myths and folklore, a love of poetry, and their own system of writing.

In their longboats, they were also incredible sailors and intrepid explorers. Icelanders speak a Nordic language today because the Vikings discovered and colonised it. They also discovered Greenland and maintained a settlement there for many years. Leif Ericsson, a Viking living in Greenland, was the first European to discover the New World, approximately 498 years before Columbus. In L’Anse aux Meadows, Canada, visitors can inspect the remains of a Viking settlement, quite possibly ‘Vinland’ as described in Eric’s Saga, although the exact location of Vinland is still a matter of bitter scholarly dispute.

Additionally, Vikings were a literate society. Like other Germanic peoples, they used the runic alphabet as a system of writing until they were Christianised, when they adopted the Latin alphabet. The Scandinavian version of the Runic alphabet is named Futhark, after the first 6 letters of the alphabet. Runes had a variety of uses: they may have been used for magic and in rituals, they were used to memorialise people and events on runestones, and at least in the latter part of the Viking Age they were also used for everyday purposes such as labelling personal items. Of course, not everyone could write, but it was an important skill for upper-class Norseman and mastering the runes increased one’s prestige.

According to the Eddas, a cycle of mythological Norse poems, the runes were discovered by the god Odin at a great personal cost. He hung for 9 days on a tree without food or water, pierced with a spear, and at the end of the nine days, the runes were revealed to him. This myth demonstrates how important literacy was to the ancient Norse. There are two stories that describe how the runes were passed on to humans. In one version of the story, the god Rig or Heimdall fathered 3 sons, with each son representing one of the three classes in Norse society (slaves, freemen, and lords). The runes were taught to the noble son and passed down to his descendants. In another myth, a human stole Odin’s rune staff, learned the runes and taught them to other people.

The ancient Norse also loved poetry, considering it too to be a gift from Odin. Norse poetry encompassed a variety of different forms, ranging from epic sagas to shorter verses suitable for runestones. Poetry could cover a range of topics, including episodes from Norse mythology, the deeds of heroes, and the deeds and accomplishments of ordinary Norsemen who did extraordinary things. Many of the long epic poems, known as sagas, were collected and preserved in Iceland.

As time went on, the different dialects of old Norse became more and more distinct from each other, eventually forming 6 different languages: Icelandic, Faroese, Norwegian, Danish, Swedish and Norn, an extinct language that was once spoken in Norse-occupied regions of Orkney and Shetland. Of the surviving languages, Icelandic is actually closest to Old Norse. In fact, when written down the two languages are almost identical, and Icelanders can read Old Norse manuscripts without much difficulty. However, the way the language is pronounced has changed dramatically over time in Iceland as well.

Today, the Nordic countries are bound not only by a common linguistic heritage.