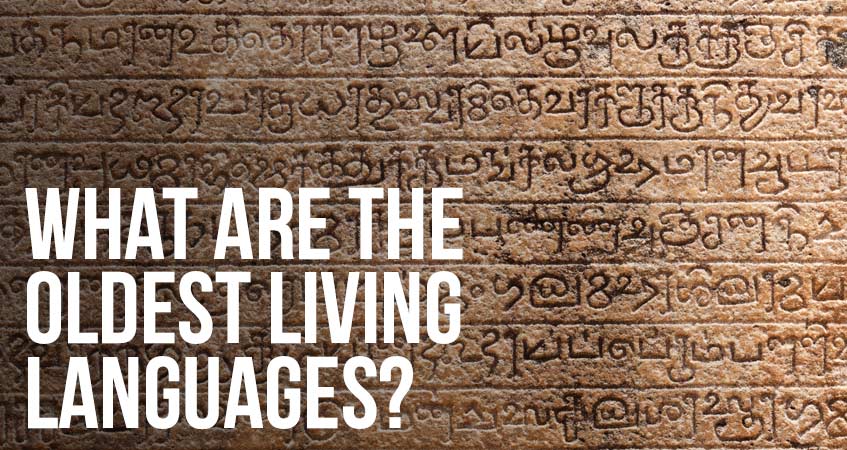 Have you ever wondered what the oldest living languages are? That question is harder to answer than it might seem at first. The origins of many languages are lost in time, and it’s hard to say which is the oldest.

That said, some languages are older than others. So, let’s take a look at 10 of the oldest living languages in the world today:

How old is the Hebrew language? Over 3000 years old
Where is it spoken? Primarily in Israel
Number of speakers: Over 9 million people worldwide, including 5 million speakers in Israel

Hebrew is the only living language remaining in the Canaanite family. The oldest Hebrew inscriptions dating back to 3,000 years ago.

But by 400 CE, it was hardly ever spoken. People still studied the language. It was used in Jewish religious ceremonies and in literature and poetry. But they didn’t use it in their everyday lives.

Languages die when people don’t speak to them. So, how did Hebrew come back from the dead?

The change began in the late 19th century, as Jews began to return to Israel.  Some began using it at home, with their families. Then, it moved to a language of instruction in some schools. And finally, it became the language of everyday life, with Jewish immigrants to Israel from around the world obliged to learn it and speak it.

How old is the Tamil language? Over 2,200 years old
Where is Tamil spoken? Mainly India, Sri Lanka, Singapore, and Malaysia
Number of speakers:  70 million native speakers

The language of the Tamil people has been called the “the only language of contemporary India which is recognizably continuous with a classical past.”

In 2004, archaeologists unearthed earthenware burial urns inscribed with a “rudimentary” Tamil Brahmi script carbon-dated to 500 BCE.  So far, this is the oldest example of Tamil. By 300 BCE, Tamil already had a thriving literary tradition.

How old is the Persian language? Old Persian goes back at least to the Achaemenid empire, which lasted from 600 BCE to 300 BCE.
Where is Persian spoken? Iran, where it’s known as Farsi, Afghanistan (Dari), Tajikistan and Uzbekistan (Tajik)
Number of speakers: 45 million to 60 million

The oldest inscription we’ve found so far in Old Persian dates back to between 522 BC and 486 BC. Darius the Great composed the inscription. However, it’s unlikely the great king took a chisel to the rock himself.

How old is Lithuanian? It’s hard to say, but the first written text we have is from the 16th century
Where is Lithuanian spoken? Lithuania
Number of speakers: 3 million

Lithuanian is a good example of why it’s so hard to answer the question “What is the oldest living language?”

On one hand, the earliest written record we have of Lithuanian is from 1500 AD.  On the other hand, Lithuanian is one of the most conservative Indo-European languages. In many ways, it’s as close as you’ll get to Proto-Indo-European. It also has quite a bit in common with ancient Sanskrit, Latin, and Greek.

How old is the Chinese language? The earliest written example dates back to 1250 BCE
Where is it spoken? Primarily China, Taiwan, and Singapore
Number of speakers: 1.2 billion

The earliest written examples we have of the Chinese language are from around 1250 BCE. That said, the language likely goes back much further than that. Some scholars believe it has roots in the Yangshao culture. At 5000-6000 BCE, scraps of pottery from Yangshao currently hold the Guinness World Record for the earliest written language.

How old is the Basque language? It probably dates back to before the Indo-Europeans arrived in Europe
Where is Basque spoken? Spain and France
Number of speakers: 55,000 to 720,000

Basque is a language isolate. It’s distinct from any other language in Europe. Therefore, linguists believe it predates Indo-European’s arrival on the continent. It is quite possibly the oldest language in Western Europe.

How old is the Arabic language? Old Arabic dates back to 900 BCE
Where is Arabic spoken? The 22 states that make up the Arab League, plus some additional parts of Asia, Africa, and Europe.
Number of speakers: 290 million

The earliest known examples of written Arabic are personal names dating back to the 9th century BCE. By the end of the 8th century CE, a standardized version of Classical Arabic was in use for Arabic poetry and literature. Classical Arabic, in turn, developed into the Modern Standard Arabic used today.

How old is the Irish language?  Older than the oldest known Ogham inscriptions, from the 3rd or 4th century CE.
Where is Irish spoken? Ireland
Number of speakers: 1,168,000

Long ago, possibly as early as 2600 BC, a tribe speaking an ancient Celtic language arrived in Ireland. By the 3rd or 4th century BCE, that language had evolved into Primitive Irish. Inscriptions in Primitive Irish still survive today, carved in stone in the Ogham alphabet. By the 6th century, Irish monks were scribbling in Old Irish in the margins of Latin manuscripts.

How old is the Greek language? The earliest known written example is from 1450-1350 BCE.
Where is Greek spoken? Mostly in Greece, Cyprus, Italy, Albania, Turkey.
Number of speakers:  13 million

Greek has probably been around since at least 3000 BCE. However, the earliest known written example we have is on a Mycenaean tablet in the Linear B script, from 1450 BCE.

Of course, the language has changed since then. But it’s changed more slowly than many other languages. And according to Wikipedia, “Although Greek has undergone morphological and phonological changes comparable to those seen in other languages, never since classical antiquity has its cultural, literary, and orthographic tradition been interrupted to the extent that one can speak of a new language emerging.”

How old is the Aramaic language? Aramaic is at least 3000 years old.
Where is Aramaic spoken? Small groups of Aramaic speakers live in Iraq, Turkey, Iran, Armenia, Georgia, and Syria.
Number of speakers:  Around 907,000 speakers for all Aramaic dialects combined

Eventually, though, Arabic replaced it. Today, only small pockets of Aramaic speakers remain in places like Iraq, Armenia, Iran, Georgia and Syria.

As a result, Aramaic may soon become extinct. According to the Smithsonian, “Aramaic is down now to its last generation or two of speakers, most of them scattered over the past century from homelands where their language once flourished.”

Obviously, this list is far from comprehensive. If I missed your favourite ancient living language, feel free to mention it in the comments.

50 thoughts on “What Are the Oldest Living Languages?”