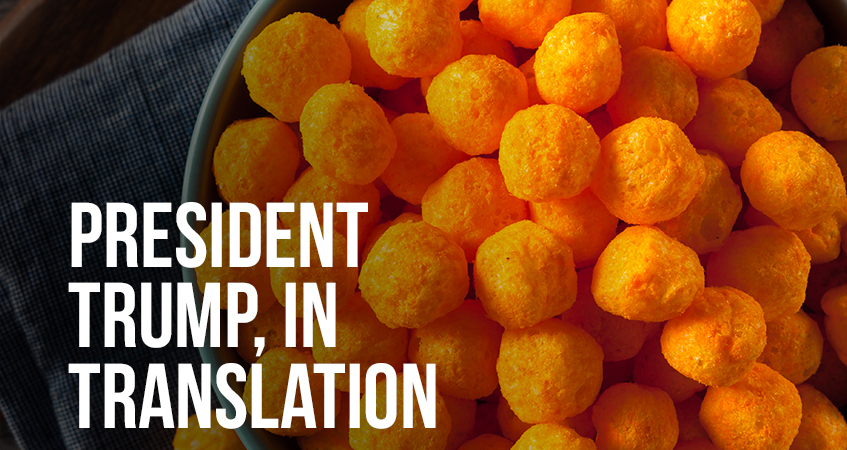 T.S. Eliot called April the cruellest month. But not for professional translators and interpreters who specialize in news and politics. In 2016, the cruellest month was probably November, when they (along with the rest of the world) came to the horrifying realization that they would be stuck with Donald Trump for at least the next four years.

We’ve written about some of the reasons Donald Trump is hard to translate: the word salad, the vulgarity, the words that don’t quite make sense. But now that he’s actually, officially the president of the United States,  the stakes are higher. And if you thought that becoming President meant Trump would put down Twitter and be more mindful of his speech, you would be incorrect.

So, here’s a quick recap of how translators and interpreters are coping with Trump’s first week as president:

Unless he’s reciting a pre-written speech, Trump’s speaking style could charitably be described as “stream of consciousness.” It’s like he starts talking about a topic and then takes a detour all the way from the Shire to Mt. Doom, often leaving the original thought unfinished.

As Christiane Abel, a French professor and interpreter for the US State Department told the LA Times:

“There are several things that make an interpreter’s life easy. When people finish their sentences …  the syntax is well-structured … when the speaker starts speaking and you kind of understand where the person is going, you can kind of decode the underlying thought.”

That’s not Trump. And while the lamentations of French translators have attracted the most media attention, French is far from the only language in which it is difficult to translate new President. For example,  as  Japanese translator Agness Kaku explained to the Washington Post:

English is a subject-prominent language — understanding a sentence in English involves pinning down who or what the subject is. Japanese, on the other hand, requires tracking the topic of a conversation.

In Trump’s remarks, Kaku said, the subject is very easy to keep track of — “it’s about him, it’s about the enemy.” But the actual topic or point of his sentences is often difficult to grasp, complicating Japanese translations. “It just drifts,” she said. “You end up having to guess as a translator, which isn’t very good. You shouldn’t have to guess.”

How Do You Say “Yuge!” in Mandarin?

Then, there’s Trump’s frequent use of exaggeration and hyperbole, which can be difficult to render into other languages.  For example, according to the LA Times, “huge,” “enormous” and “tremendous” all translate into the same word in Chinese: “da,” or “big.” Much of his “braggadocious-ness” gets lost in translation.

Basically, as Agness Kaku noted in the Washington Post, past presidents were mindful that people around the world hang on to their every word. They worked to avoid being misinterpreted.  But not Trump.  As she told the Washington Post, “I’m not sure if this one will understand that. I don’t think he cares.”

Russia has never tried to use leverage over me. I HAVE NOTHING TO DO WITH RUSSIA – NO DEALS, NO LOANS, NO NOTHING!

Clearly, President Trump is not going to take former Vice President Biden’s advice to “grow up” and put down Twitter. Mercifully, tweets max out at 140 characters. But that brevity is a double-edged sword.  Even Americans often struggle to interpret the exact meaning and potential policy implications of his tweets. And it can be difficult for translators to provide accurate translations of his tweets quickly enough to satisfy an anxious world. (Obviously, Twitter’s machine translation does not cut it in this situation.)

The character limits and immense speed in which tweets are posted make it difficult to circulate accurate translations of Trump’s tweets. “I’ve actually seen things explode within hours,” Kaku said.

And the LA Times notes that “Weibo, China’s version of Twitter, increasingly fills with questions about the meaning of terms like “no nothing,” a reference to Trump’s tweet: “I HAVE NOTHING TO DO WITH RUSSIA – NO DEALS, NO LOANS, NO NOTHING!”

Trump’s use of Twitter has already led to confusion with a Taiwanese news agency, because they didn’t pick up the sarcasm in his tweet “Interesting how the U.S. sells Taiwan billions of dollars of military equipment but I should not accept a congratulatory call. ”

For Spanish speakers, Transfluent has a professionally translated version of Trump’s Twitter feed.

How Donald Trump Got His Chinese Name

Even translating Trump’s name is a challenge in Chinese. His official, Chinese Foreign Ministry-approved name is Te Lang Pu, according to USA Today.

This translates to “extraordinary, bright and popular,” which should appeal to President Trump’s “yuge” ego. But the alternate translation, “unusual, loud and common” makes it a bit of a backhanded compliment.

Meanwhile, Daoist monks are promoting another Chinese version of Trump’s name. “Chuan-Pu” contains the Chinese word for “river”, the better to “to balance out Trump’s fiery nature,” according to USA Today. Good luck with that!

“Trump gives me outbreaks of sweat”, his German translator says. “He is so contradictory that people think the translator talks rubbish.”

In interviews and essays from translators and interpreters, there’s another common sentiment. They fear people will blame them for any inconsistencies and ambiguities in their translations.

So, if you’re reading something Trump said in translation and it doesn’t seem to make sense, just remember: the translator is probably doing the best they could do with what they’ve been given!

For more on why this could be important, see 7 Times Translation Changed History.