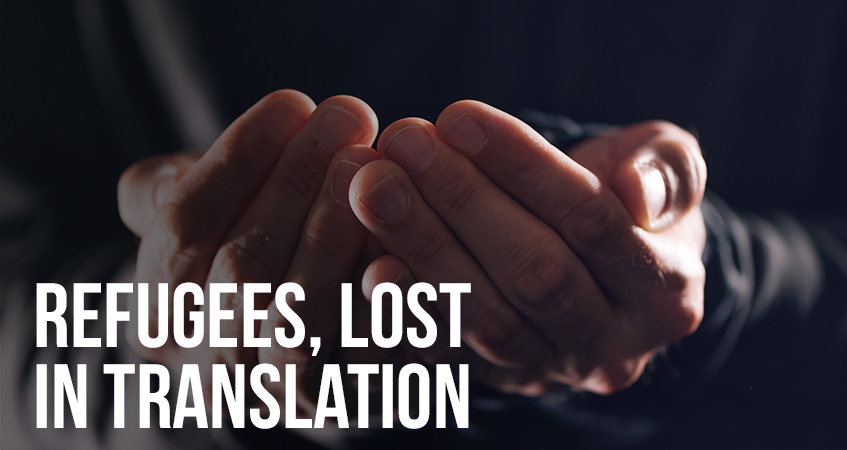 The refugees fleeing the turmoil in the Middle East lack a lot of things, even basic necessities. One vital, often overlooked unmet need is access to translation help. Without it, refugees and migrants can’t communicate effectively with authorities and aid workers. The resulting communication barriers are further inflaming an already tense situation.

For example, in this article from 09 September, Hungarian police try to control a crowd of desperate refugees, but there is only one interpreter available in the entire train station:

“Police officers, in one horizontal line, rushed toward the crowd of refugees, blocking them from getting through. In broken English, the Hungarian officers tried to get the refugees to “stop” and “back up.” Confused and unable to fully understand the English, the refugees began to yell back in frustration. Children sitting on their fathers’ shoulders cried. Mothers holding newborn babies shrieked.”

Imagine how much more smoothly that scene could have played out if the police and the refugees could understand each other. At every step of their journey, refugees need translation assistance. Here’s how people around the world are helping to provide it.

In Hungary, Central European University has set up a database of volunteer translators from its students, staff and alumni. Translators can translate by Skype, telephone or email if they are not local to the area.  As Simona Gamonte, the group’s moderator and CEU’s program coordinator for the University’s Human Rights Initiative (HRSI), explained to the International Business Times:

“This group is meant to generate fast communication between the CEU members that signed up to volunteer as translators and the different civil and social actors that are working or volunteering to help the refugees.”

You don’t have to have a connection to the University to join the CEU Facebook group Translators for Refugees. They are looking for translators in the following languages: Arabic, Urdu, Pashto, Greek, French, Albanian and Turkish.

Hungary’s small Muslim community is also actively volunteering to help with translation as well other needs. However, there simply aren’t enough interpreters available to keep up with demand.

Meanwhile, in Germany, demand for Google Translate’s Arabic to German machine translation service is up five-fold. Of course, we all know that Google Translate leaves a lot to be desired. To try to improve it quickly, Google is turning to crowdsourcing. In a statement quoted in the Gulf Times, Google Germany said:

‘Communication between refugees and aid workers is currently a major challenge. Many manage with the help of Google Translate, which is why we have seen a five-fold increase of translations from Arabic within Germany this year. Unfortunately the automatic translators are not always accurate, which is why we ask especially Persian and Arabic speakers to use their language skills to optimise the translation service,’ the internet giant added.

Can you help? Here’s how.

The Refugee Phrasebook is a crowdsourced project that seeks to translate useful phrases for newly arrived refugees and those assisting them. The phrasebook is the brainchild of German volunteer Julieta Aranda. It’s an open Google Doc that anyone can contribute to. As Aranda explained to New Europe, the project quickly took on a life of its own:

It only took a few days until it grew into almost 30 languages and hundreds of entries. Printable versions are done through a conversion to Wikibooks. Everyone can contribute, everyone can use the data, everyone can print and distribute everywhere they want and develop the project further, or branch out.

You can contribute to the Refugee Phrasebook here.

As always, Translators Without Borders have been at the forefront of the effort to translate for the people involved in crisis. They have organized volunteer translators into “Rapid Response Teams” to help refugees, aid workers and other communicate.

Unlike the other efforts described here, Translators Without Borders use trained professional translators who volunteer their time. While the grassroots, open source efforts are absolutely important, valuable and necessary, there are also situations where professional translation is essential. As they explain in their newsletter:

To help our aid partners who are on the ground, we are quickly putting together teams of Words of Relief rapid responders. We are looking to provide community translation training in several areas, and we are providing our Words of Relief code of conduct for translators. We will be working with aid organizations offering humanitarian aid and information to ensure that the content we translate is neutral and humanitarian in nature.

If you’re a translator, you can volunteer to help here.  They are looking for the following languages: Arabic, Pashto, Dari, Farsi and Greek.  If you aren’t a translator, they also accept donations. This is a first-rate organisation that K International has always been proud to support.