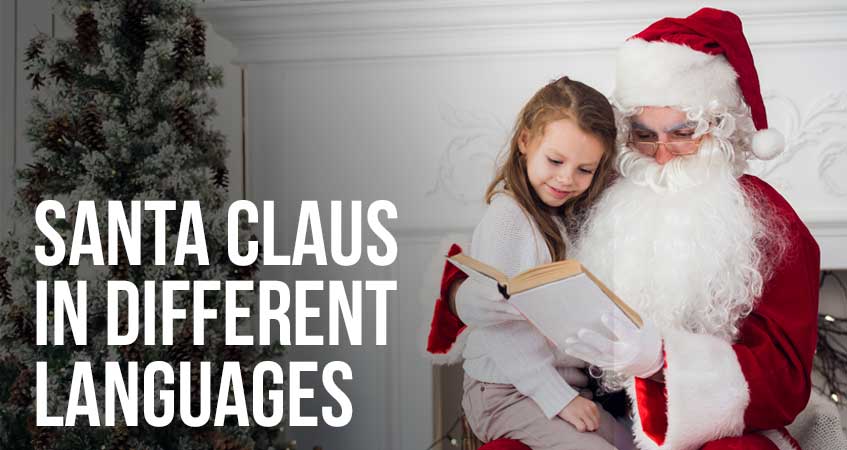 During the Holiday Season, one man and only one is the centre of attention. Flying in the sky on his magic sleigh, distributing presents all over the world and bringing joy in each home, Christmas wouldn’t be Christmas without Santa Claus. Ever wonder what Santa is called in different countries?

Here’s your answer (with the literal translation in brackets afterwards if needed) & remember, if you need anything else translated our document translation service is here for you.

Santa Around the World

Santa Claus is the most universally recognised figure around the world, adopted by differing cultures, many of which never see snow from year to year. One of the reasons for his, or her, popularity is the ability to merge with local gift-giving customs, resulting in a multitude of hybrids with their own unique traits.

The origin of the story is traced back to Saint Nicholas, born in the Turkish town of Patara and who died in 350AD, having travelled around Roman-controlled Palestine and Egypt. He was renowned for his anonymous gifts of gold coins to the needy and this has been traditionally celebrated on the 6th December.

Father Christmas personifies the British version of the tale, dating back to the reign of Henry VIII, and representing the spirit of Christmas. This was reinvented by the Victorians when the Queen popularised the traditions of her German consort Albert, including the first Christmas tree, under which presents too big for stockings, magically appear.

The pronunciation of Saint Nicholas in Dutch can be phonetically spelt ‘Sinnterklaas’ from which Santa Claus was derived as settlers headed across to the new lands of America, mixing with many other cultural influences. The gift-giving became associated with the Magi, the three wise men who visited the birth of Christ, with German and Scandinavian influences favouring the 24th December.

Iconic pictures and literature became the established version of Santa Claus in a world short of multi-media. The poem ‘A Visit from St Nicholas’ in 1823 set the story of arriving by sleigh on rooftops and climbing down chimneys, while a black and white print by political cartoonist Thomas Nast in 1881 portrays the jolly man in fur-lined robes that everyone recognises today. Contrary to urban myth it was not Coca Cola who first changed Santa’s robes from green to red but White Rock Beverages, but it was the former’s brand awareness that made the change permanent.

Today the Dutch version of Sinterklaas retains a close link to the story’s origins and has a much darker side than most. Assisted by Zwarte Piet, he arrives from Spain by boat and then spends three weeks travelling around the country delivering presents to good children by dropping them down chimneys. Those that are found to be on the naughty list are reputedly whipped and thrown into sacks before being carted back to Spain. In the Alpine region of Europe Zwarte Piet is a minor villain compared to Krampus (the Claw) who travels with Santa spreading chaos and misery amongst sinners. He has his own feast day, the fifth of December, when people dress up to scare and play pranks on each other.

Papai Noel takes over the role in Brazil, with typical flair and style in a country fond of Carnival. Swapping fur-trimmed velvet for a more tropical red silk suit he arrives by helicopter at the Maracanã football stadium a few days before Christmas, which is packed with expectant children. Since most houses in the country are built without chimneys the children leave shoes outside to be filled with sweets.

Elsewhere in South America, it is el Niño Jesus, the infant Jesus, who brings presents to Mexico, Columbia and Costa Rica. While in Puerto Rico there is a second day of celebration on the Epiphany, to celebrate when the Magi arrived bearing gifts. Children place grass under their beds for the camels on which they travel, and awake to find their kindness rewarded.

In Japan, the Christmas period is traditionally a time for performing charitable work but at New Year the figure of Hoteiosho appears as a fat monk with eyes in the back of his head to spot whether children are being well behaved or not. He carries with him a sack full of toys to reward those he sees fit.

In Italy one of the original pagan characters still survives, a witch who goes by the name of La Befana, who might arrive on Christmas Day or the Epiphany, depending upon the region. A benevolent soul, she brings gifts of sweets and dried fruit, which she leaves in the socks of good children, all others receive a lump of coal as a mark of her displeasure.

For Sweden, it is the Julbock, the Christmas goat, who is credited with bringing presents and festive cheer. His origins are derived from the stories of the Norse God Thor, who used two goats Taningnjost and Tanngrisner to pull his chariot through the air, a method of transport that sounds vaguely familiar.

The territories of Eastern Europe are presided over by Ded Moroz, Grandfather Frost, who is assisted by his grand-daughter Sengurochka, the Snow Girl. Carrying a magical staff he travels in a traditional sleigh, drawn by three horses running side by side. Moroz is renowned to have a split personality, rewarding generously those he finds to be honest and hard-working, but punishing pitilessly those who are immoral and lazy. He is also known as a highly-skilled smith, whose powers include chaining the waters with iron frosts.

So wherever in the World you are this Christmas, Santa Claus and his associates will be visiting somewhere close to you. The concept of rewards for the good and punishment for the bad have been part of folklore for millennia, Saint Nicholas just happens to be the figure to have bound them all together.

For the last couple of years, you can track Santa around the world using Google, more accurately using the Google Santa Tracker. It’s a handy little tool to help the kids (and big kids) watch where he’s been on the big night and the estimated time of arrival at your location (obviously you have to be asleep when he actually comes down your chimney or the magic won’t happen).

And (bonus) if you go there now there’s an advent calendar with a new game each day to help you pass the time away.