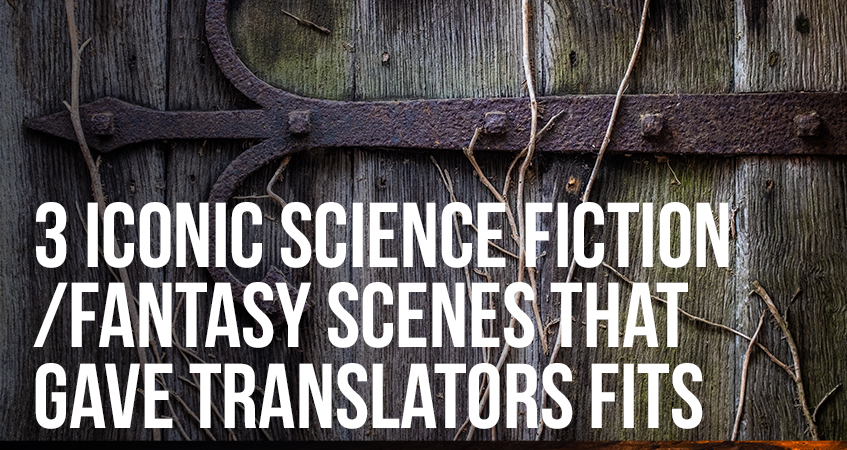 When translating, one does not simply swap one word for another. Writers choose their words carefully, combining characteristics like sounds, sentence structure and meaning to create different effects. Often, what works in one language simply doesn’t work in another, and translators have to come up with creative solutions that preserve the impact of the original words.

Here are 3 iconic moments from fantasy and science fiction that probably gave their translators fits:

Game of Thrones: Hold the Door!

You may have seen this collection of images floating around the interwebs this week.  It shows how Game of Thrones translators dealt with the death of everyone’s favorite gentle giant, Hodor.  Just in case you missed it: it was revealed that Hodor was originally an intelligent, articulate stablehand named Wylis. An accident of time travel gave poor young Wylis a vision of his eventual death in the show, fending off undead long enough for his young charges Bran and Meera to escape. The vision caused a seizure that left Wylis brain-damaged, endlessly repeating “Hodor!,” a contracted version of “Hold the Door!”

Obviously, this was not an easy scene to translate, as the equivalent words for “Hold the door!” do not necessarily sound like “Hodor!” in other languages.

For example, the Dutch translators had it easy: “Houd de deur!”

The Italian translators had to get a bit more creative, changing “Hold the Door!” to “Block the horde!”:

So did the French. “Don’t let them get outside!”

“Stay there!” in Turkish

“Hold the dead as long as you can!” is a creative solution for Polish, but it still doesn’t work that well

Check out the entire gallery on Imgur if you have time. And feel free to suggest alternative translations in the comments!

When Luke Skywalker first encounters Yoda on Dagobah, he is disarmed by Yoda’s small size, frail appearance and peculiar way of speaking. In fact, for English speakers, the sentence structure Yoda uses is as much a part of his character as his green skin and big pointy ears.

Yoda orders most of his sentences “Object-subject-verb.” In the real world, this structure is only used in few languages spoken by isolated South American indigenous tribes. Yet, to an English speaker, it sounds odd but understandable.  As the Adrienne LaFrance wrote in the Atlantic,  “the way he orders his sentences sounds vaguely riddle-like, which adds to his mystique.”

But how well does this quality translate? Depends on the language. As you can see from this Reddit thread, Yoda’s speech is directly translated in most languages that use the same “subject-verb-object” sentence structure, like French and German. For Czech, though, Yoda’s syntax “subject-object-verb,” like Japanese. According to Reddit, while Czech is a “free word order” language,

“Interestingly enough, putting an object before a verb does sound unusual to most speakers of Czech.”

Italian is another “subject-object-verb” language. Interestingly enough, though, Sardinian Italian speakers often use the “object-subject-verb” construction. So, when translated to Italian, Yoda’s speech sounds vaguely Sardinian!

Meanwhile, in Japanese, Yoda’s sentence structure is normal but he uses a more archaic vocabulary. In some languages, like Hungarian and Korean, Yoda talks just like everyone else.

Imma let you finish, but this is possibly the best girl-power fantasy scene of all time. OF ALL TIME! The Witch King of the Ringwraiths comes bearing down on Eowyn, who is fighting disguised as a man. He taunts her, saying “No man can kill me.” And she throws up her helmet, lets her hair down, raises her sword and says “I am no man!” (Or, in the books, “But no living man am I!”)

But that line is not as easy to translate as English-speaking readers might expect. For example, a commenter on Reddit noted that

“The Swedish translation changed it to Merry giving the final blow, because it was to hard to translate the “I’m no man”-line. Read the books in English a couple of years ago and thought I misremembered the scene in Swedish. Went back to double check. I did not.”

Now, part of the problem with the Swedish translation was that the translator, Åke Joel Ohlmarks, was not very good at his job. Tolkien despised his translation and made no secret about it. There was so much animosity that when Ohlmarks’ house burned down, he accused deranged Tolkien fans of setting the fire!

It’s almost impossible to translate it into other languages, eg. my mothertongue finnish. i mean, people who don’t understand too much english don’t relly get the joke..

Got any other moments from movies and books that were difficult to translate? Got language skills, and want to try your own hand at translating that “Hold the door!” scene? Show off in the comments!

Previous Post The Uber Guide to Localization: 6 Strategies Worth Stealing
Next Post 4 Passages in the Little Prince Show Why Translation is an Art