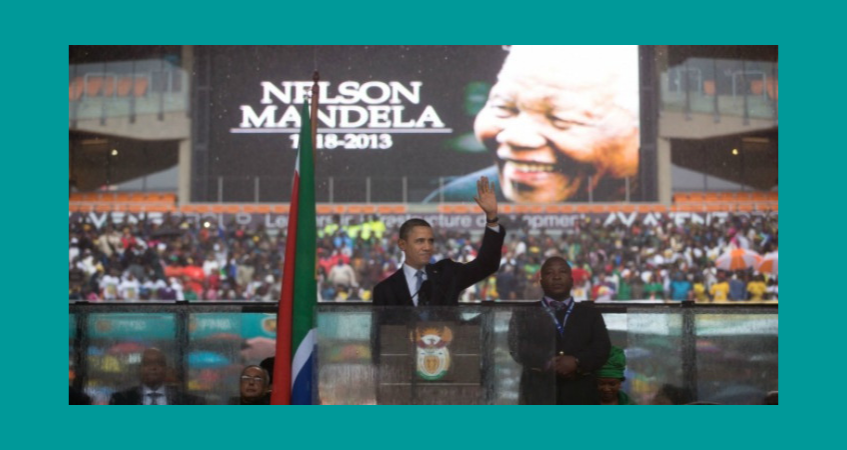 For a man like Nelson Mandela, who fought so hard to create a more inclusive society, it was neither a proper nor a fitting sendoff. A sign language interpreter was provided to interpret Mandela’s memorial service for deaf audience members and viewers, but it seems nobody bothered to check his qualifications before they put him on stage.

The interpreter, a man by the name of Thamsanqa Jantjie, spent hours on stage “interpreting” the speeches of leaders and dignitaries from around the globe. Unfortunately, he “interpreted” their words into the sign language equivalent of gibberish. As Action on Hearing Loss CEO Paul Breckell told NBCNews:

“The limited number of signs, the amount of repetition, lack of facial expressions and huge gaps in translation meant that deaf or hard of hearing people across the world were completely excluded from one of the biggest events in recent history.”

So, what was he doing up there? Did they accidentally hire a performance artist instead of an interpreter? Was it supposed to some sort of Dada-esque “interpretive dance?”

The truth seems to be much more mundane- they hired a (possibly) half-trained victim of schizophrenia for what could arguably be the most important sign language interpreting job of the year.

Hendrietta Bogopane-Zulu, South Africa’s deputy minister for women, children and people with disabilities, told the Guardian that Mr. Jantjie had not completed training for his position:

“It was bad. Was he a fake? No. Does he have the training? He has only the introduction to the training. That’s like a lot of South Africans.”

Yes, but you probably shouldn’t hire someone to interpret for you if they haven’t been fully trained. That goes for any event, but for major public events where the world is watching, it goes double.

Mr. Jantjie, on the other hand, maintains that he is fully qualified and capable of accurately translating to and from sign language. He blames his poor performance at the service on a schizophrenic episode that temporarily left him unable to interpret. Too scared to leave the stage, he just had to wing it.

It’s not his fault that he’s schizophrenic, but apparently there were previous indications that it wasn’t well-controlled and that he’d had at least one violent schizophrenic episode while on the job previously.

Either way, this was a total fail. But there may be a silver lining: The Guardian’s Cathy Heffernan notes that it shines a media spotlight on the problem of poor sign language interpretation, hopefully leading to more scrutiny for interpreters going forward.